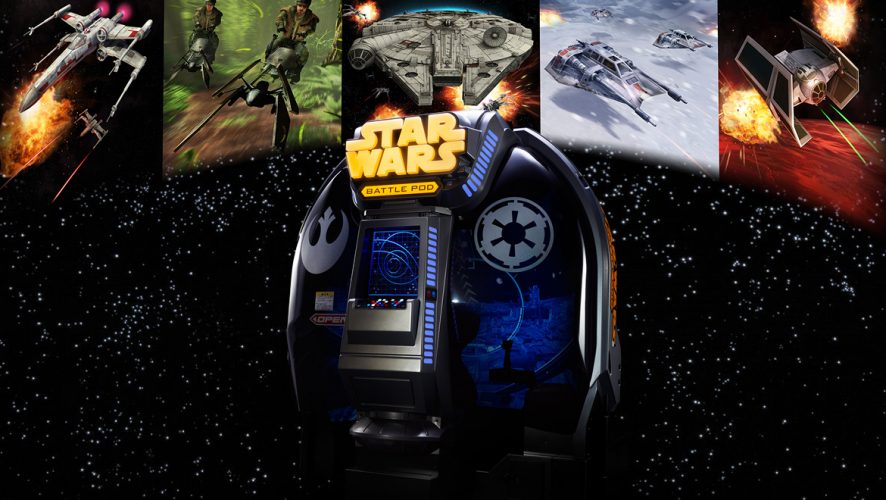 Prepare for a visit from a galaxy far, far away, coming this November!

No, we’re not talking about the arrival of ANA’s R2-D2 aircraft at Changi Airport, or Star Wars Battlefront. Geek Culture, together with Disney and Bandai Namco Entertainment, will be bringing in the special Star Wars: Battle Pod arcade game for a special 3-day engagement at GameStart 2015.

Featuring a dome shaped screen housed in a single seater pod, Star Wars: Battle Pod is a full on experiential arcade game that zips players across five exotic and iconic battles within the Star Wars universe.

Step into the shoes, or rather, the cockpit of young Luke Skywalker as he takes out the first Death Star. And if you’re good enough, face off against the second Death Star. Survive and you can enter the record books alongside Wedge Antilles.

Experience the sensation of acceleration as you speed across the forest of Endor on your speeder bike, and feel the power of an incoming AT-AT in the battle of Hoth as you hold off the invading army alongside Rogue Squadron.

While the arcade machine was launched earlier this year, the Star Wars: Battle Pod is not available in local arcades but not many know that there is actually one fully operational unit in Singapore, located at Bandai Namco Studio Singapore’s office. And the reason is simple – while the hardware is made in Japan, the full game was designed and created in Singapore by a team of talented software engineers, some of whom are Singaporeans.

The Star Wars: Battle Pod is making a pit stop at the second GameStart Asia 2015 video games convention on November 13 to 15, 2015 and attendees will get a chance (likely to be the only chance) to move into hyperspace on the Battle Pod, as they try out a game level in this exclusive preview at the Geek Culture booth.

The Star Wars: Battle Pod will be available on a first-come-first-serve basis at GameStart 2015.

Visit the Geek Culture booth at the show for more details on the Star Wars: Battle Pod contest, where top scorers for the day will walk away with Star Wars goodies and swag. We’ve also lined up prizes for the top scorers of each level at the show. Find out more here.

Which of the 5 stages will you play first?