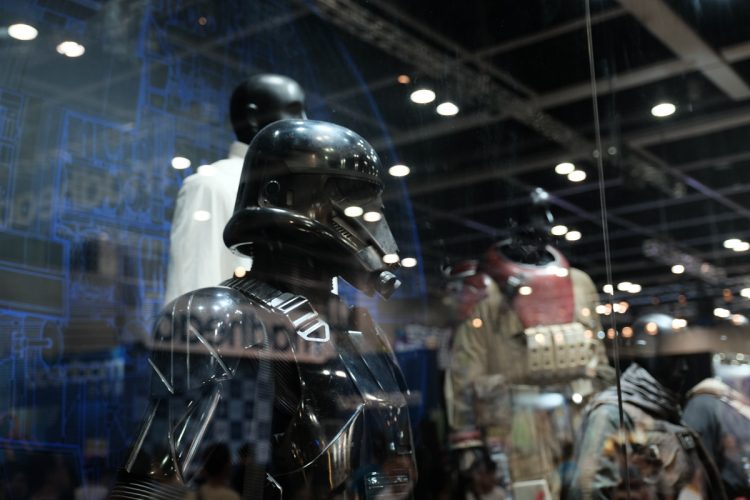 When you’re involved in as many geek related shows as Hot Toys is in a year, it makes sense to keep some elements hidden from the earlier ones, and bring them on a world tour. This is so that every display looks fresh, and having been to San Diego Comic Con 2016 and to the Hong Kong Ani Com 2016, the natural stop might be STGCC 2016 in Singapore come September,

After all, and as far as I remember, STGCC 2015 had a more majestic and better Hot Toys booth display and layout, as compared to the one I saw at Ani Com recently.

And judging by Hong Kong’s efforts, it seems that this year’s theme for Hot Toys seems to be SCALE!

If you’re wondering how big this actual statue is, the following shot would shed some light.

Time to put all your MCU Hot Toys figures to good use! If you’ve the entire Hot Toys Avengers team, all that’s missing is a Ant Man to round up the airport fight scene. One glaring omission would be the new Tom Holland Spider-Man sadly. He might have been released into the cinematic universe but he’s (currently) missing from the Hot Toy line-up.

Cumberbitches, it’s time to bring home your very own Benedict Cumberbatch. Hot Toys’ upcoming Dr Stephen Strange here is still a working prototype, but I’m guessing he’s not going to deviate far from the final model. Khan you dig it?

Apart from Dr Strange to round up the 2016 movie calendar year, there’s little for Hot Toys to add on for their exterior display. This display was barricaded and you actually had to queue to get closer into the display area. Think about high end retail shopping, but made for just for geeks.

The real show stealer is the other half of the Hot Toys booth, which had plenty of Star Wars figures on display.

Big seems to be the theme here, with this 1/6 Endor diorama that’s of equal measure to the Civil War airport scene.

This Stormtrooper here almost looks as if he is posing for the camera before he starts to boogie. The real winner here is the AT-ST, and we hope that he makes his rounds down to Singapore.

A gold chrome Stormtrooper? It’s likely made for the Chinese market since we know how much they love their bling. And we’re sure if you’d like to wear him, a chain accessory can be arranged as well.

We also got a peek at a few upcoming Star Wars Episode VII figures, but unlike the prototype display of Dr Strange, there was no sight of any Rogue One toys.

We know this R2-D2 will be a hot favourite with many a fans. With its diecast dome, LED lights and sound, it’ll be an easy sell to any collector.

The real appeal to fans though, would be Hot Toys’ answer to the insanely popular Funko Pop range of low priced figures. Priced slightly lower than their rivals (in Hong Kong at least), and certainly more likely to be placed on the open desk, the new Star Wars Cosbaby series would be a definite hit. And they are all bobble heads to boot!

Sadly not all will be available at launch.

For the old school OT fans, rusty versions of C-3PO and R2-D2, together with Darth Vader and ROTJ Luke were available for sale. The larger sized Vader and classic Stormtrooper were available as well. Availability seems to differ from show to show it seems so we’re not sure what will go on sale here. With a relatively low price tag, the urge to sweep all of them off the shelf is incredible hard to resist!

Like the Marvel side of things, Rogue One take prominence outside the booth, with the costumes on display. We’d say Disney scored a good push here to market their yearly Star Wars offering.

Featuring costumes of Director Krennic, an Imperial Death Trooper, Jyn Erso, Chirrut Imwe, and Baze Malbus, we hope these guys (the costumes, not the stars, not that we would mind having them) will also make an appearance at STGCC 2016. The glass does make is a bummer for photography.

Will we be able to check out the entirety of this booth at STGCC and more? Fingers are crossed!

*We are not stating that this list is definitive.