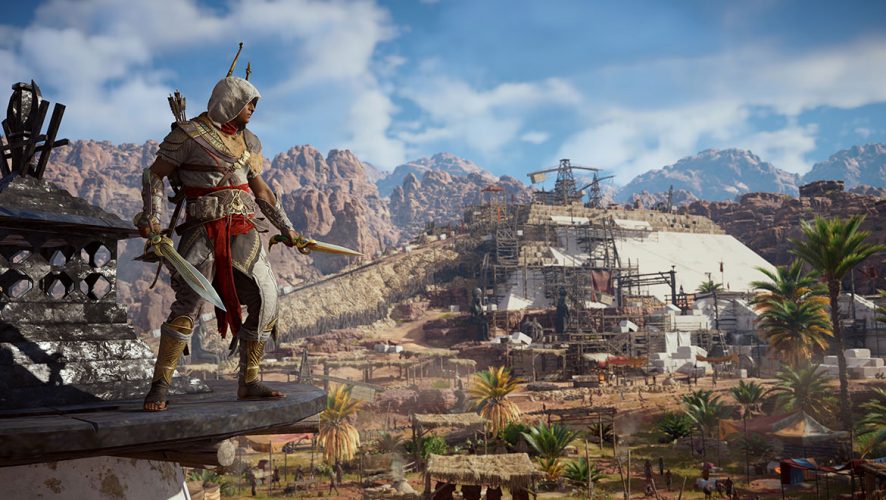 Another year. Another Assassin’s Creed. What? No you say? They took a year off? So what can we expect from the new Assassin’s Creed that’s had an extra year of polish? A stunning return to form or is it still a case of Assassin’s Fatigue..

Assassin’s Creed Origins drops the player into the beautiful and dynamic open world of ancient Egypt and from the get go it’s a fantastic looking place and an amazing location to use in an Assassin’s Creed game. Set during the time of the Ptolemaic King, Origins tells the story of the origins (of course it does!) of the Assassin Brotherhood. You take on the role of Bayek, a ranger who is out for revenge after seeing his son murdered by a mysterious new order that is not the Templars. After this tragic loss, Bayek sets out on a spree of looting, sneaking and lot’s of stabbing. 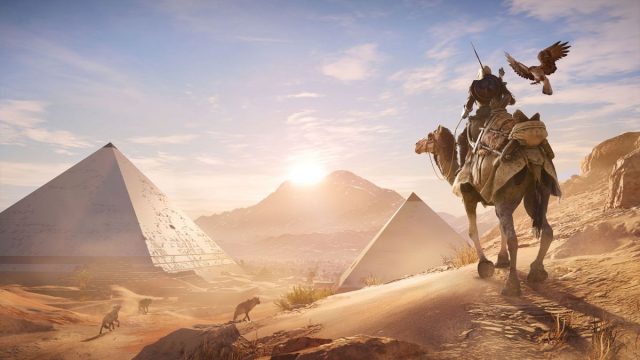 Over the course of the 30-hour main story you will travel through the many regions of North Africa and encounter various historical figures such as Cleopatra, Ptolemy XIII and Julius Caesar. While these are significant characters they never overstay their welcome and never overburden the story with their appearances which were an issue with previous Assassin’s Creed games. Location-wise, it’s a mixed bag. Some areas are wonderfully realised and brimming with content while others are not. These ’empty’ regions seem to have been put in solely to make the map ‘the biggest yet’ – a Ubisoft trend. Big map. But nothing to do. Areas that have content will have missions, side quests and even chariot racing. You can also test your combat skills in certain areas too.

There is a lot going on in Origins. Climb up to a vantage point and just stop and watch. Traders go about their business. Hunters hunt.  A man walks onto the road and is nearly hit by a group of soldiers on horses. An argument ensues. There is a threat of combat. The man flees. A woman screams. A flock of birds rise suddenly from the river bank. From my vantage point I can’t see what is really happening. Suddenly the whole town is up in arms and scrambling about. A hippo has wandered up from the river bank and is now not very happy and is charging through the once peaceful settlement. This is just one of many things you could miss if you don’t stop once in a while and take it all in. 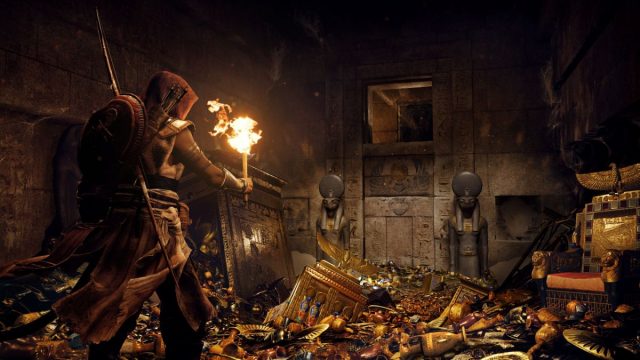 Assassin’s Creed Origins also does a fantastic job of showing the different cultures and the various issues they have with each other. You can actually learn a lot by reading the documents that you find littered throughout the game and even by just listening to the idle chatter from the NPC’s. So take the time to read those collectable documents. You might just learn something. So the world of Origins is wonderful and alive. So what about the gameplay? This is where Origins begins to stumble.

The biggest change to Origins is the combat. Gone is the button mashing of old and in comes a system more akin to a Dark Souls game. Enemies have levels. So now you need to pick your fights rather than wading in as before. You can block and parry in real-time now which is great as in previous games it was only about the parry. The new system opens up combat in ways previous Assassin’s Creed games couldn’t. Couple this with a better ranged combat system which sees a slow-mo mechanic introduced when you are jumping, the combat just feels so good. Until you take on a group of enemies and it falls apart.

Going up against one or two enemies is fine. You can lock on to the enemy you are going after and when the other gets too close you can change the lock. When there a group of enemies, locking on is useless as it hinders you so much there is no point doing it. Battles then become a clumsy mess as without locking on to a specific target you are just striking in the general direction of the group without any say on who you are going to hit. Maybe this reinforces the idea of you really should pick your battles. 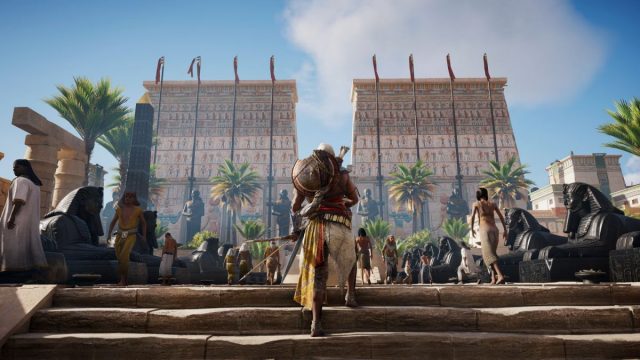 Another core aspect of the Assassin’s Creed games is stealth. You would be a pretty bad Assassin if you couldn’t stealth right? And here we have another issue. For some reason stealth in this game is terrible. Worse than previous games. It feels…broken. When you are sneaking, the controls can be very unwielding. The auto hitch to a climbable object can kill you. You could be sneaking past a wall and then suddenly you are climbing up it and get exposed. Or you could be climbing up a building and Bayek won’t jump or move to where you want to go and you are left hanging. Sometime just jumping down the other side of a wall can be an immense undertaking. Add in guards that can see through objects (x-ray was a thing back then it seems) and hear you when you are nowhere near all adds to the frustration.

In the Assassin’s Creed series, all the previous protagonists have had the Eagle Vision ability. Well it returns here also. And it really is Eagle Vision. Meet Senu. Your pet…eagle. At any point in the game you can call Senu and the view will change to his. This allows you to scout the area. You can tag enemies, reveal locations and Senu even shows you where various resources are located to be used in crafting. It’s a fun addition to the game and now we know why it’s called Eagle Vision.

The final new addition to Origins is the RPG aspect of the game. On paper this is good idea. In execution, not so much. Adding a levelling and loot system breaks the game for me. First up it adds a grind system that Assassin’s Creed doesn’t need. You can’t visit all the locations on the map as many are level-gated until you hit the required level which diminishes the open world aspect of the game. The game promises  that you can do anything at anytime but in reality you can’t. You need to grind your skills and resources too in order to be able to use the better equipment you that you can buy / make/ find in the world. Again this doesn’t make sense. You are an Assassin. Skilled. When your equipment and weapons don’t work on higher levelled enemies just because they are underpowered feels cheap and jarring to the world Ubisoft has created. 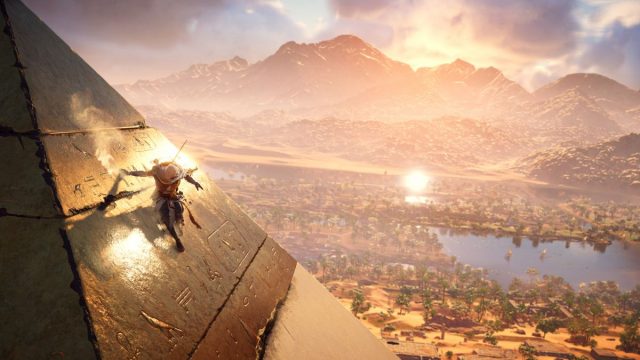 The rest of Assassin’s Creed Origins plays out just like any other (inside joke alert) Assassin’s Creed game. You climb tall buildings to reveal the map. You need to assassinate various people. You do a few missions in the modern world. You do many missions in the Animus world. Rinse and repeat. In fact, the new modern era story line seems to ignore everything from previous games and is the beginning of a new story. So will we ever get any resolution from story threads started way back in the first game? Probably not now.

Assassin’s Creed Origins is a beautiful game. You can see an extra one year polish on it. It has a wonderful location to explore. On the gameplay front. Not so much. The combat is a step in the right direction but the RPG grind element is not. If combat can be improved and the RPG element refined into something that fits Assassin’s Creed, wherever the next game will be, Ubisoft are on the right track.

Assassin’s Creed Origins is out now for PlayStation 4, Xbox One and PC.

An excellent and beautiful world awaits players of Assassin’s Creed Origins. It’s just a shame that new combat system is clumsy and the addition of an RPG-type grinding lowers the overall experience. If fixed, it’s a step in the right direction for the series.