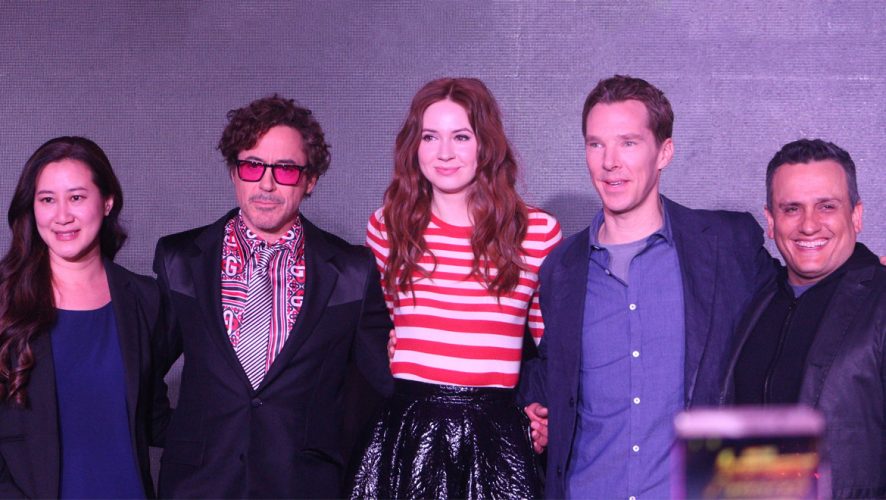 10 years, 18 movies, 22 character poster and less than 10 days before it opens. While the highly anticipated Avengers: Infinity War will be the epic culmination of 10 years of Marvel, set to feature more Marvel characters than ever before, there has been one burning question on the minds of fans.

Out of all the trailers and teasers released so far, Clint Barton isn’t just a hero that has been missing from all the publicity – he’s also a founding member of the Avengers that is nowhere to be found.

But don’t worry True Believers, as director Joe Russo has a plan for the skilled marksman, played by Jeremy Renner, even though he seems to be MIA. 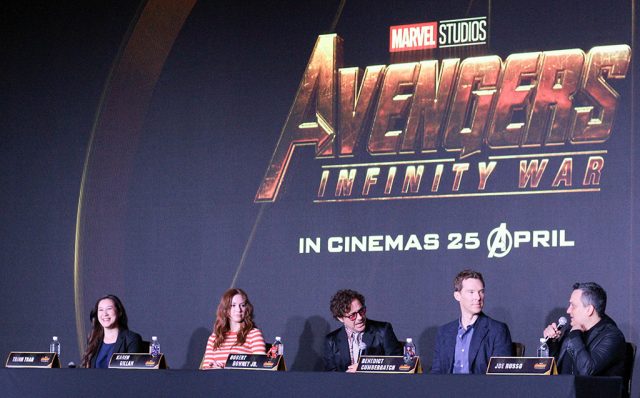 In a press conference with Russo, along with stars Robert Downey Jr, Benedict Cumberbatch and Karen Gillan, a day before the red carpet premiere in Singapore at Marina Bay Sands, Russo joked when asked about the absence of Agent Barton, “We must be crazy. There’s so many characters we’re dealing with that we were halfway through shooting and I think he (pointing at Downey Jr.) said, “Where’s Renner?”

But fret not, as Hawkeye seems to be in safe hands.

“Listen, we did not forget the twice-nominated Jeremy Renner from Infinity War. We have two movies we’re working with – Avengers 3 and Avengers 4,” explained Russo to a crowd of regional media at the press conference.

“I think last week, we released 22 character posters. There’s only so many people you can put in one film and we have a really interesting story cooked up for Hawkeye. I would say that patience is a virtue, and it’s a long play, not a short play, so we did not forget Hawkeye.” 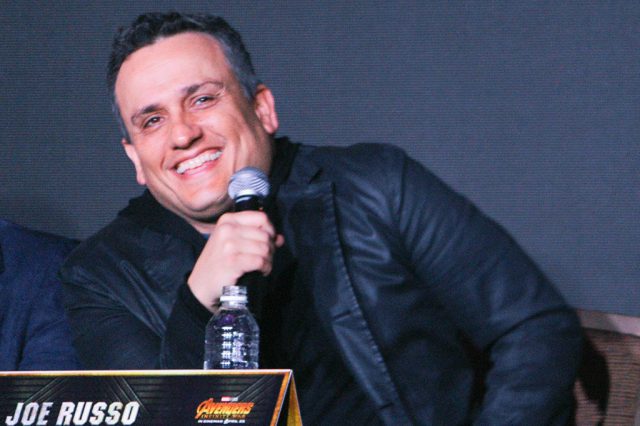 And there is a reason for the crowd to believe Russo. The last time Russo was in town as part of Team Cap for Captain America: Civil War promotions, he promised to return to the Little Red Dot one day, and this time, he brought the party to us, with Team Iron Man himself, Robert Downey Jr. Rounding up the attendees for the press con is also the movie’s executive producer, Trinh Tran.

Along with praising fans in Singapore as being “the best in the world”, Joe Russo also finally clarified took his stand in the Team Iron Man vs Team Captain America debate, and it’s a doozy.

“All along I supported Team Iron Man. I was here with Team Cap as favour of Chris, but it’s great to be back, absolutely love Singapore.”

While he might be a star in his own right, Benedict Cumberbatch is actually one of the newer kids in the MCU, with one movie to his name, and one other cameo in Thor: Ragnarok. Infinity War will also mark the first Avengers film for Cumberbatch, who reflects on the experience, “It feels a little intimidating to be frank, when you first step onto a set filled with a roster of iconic characters as well as iconic actors. And then you go about doing a day’s work, and forget about the numbers of 18 plus films and 14 plus billion dollars, and all this machinery, all this success leads to a point where you’re on set with two of the most talented directors and extraordinary cast and crew.” 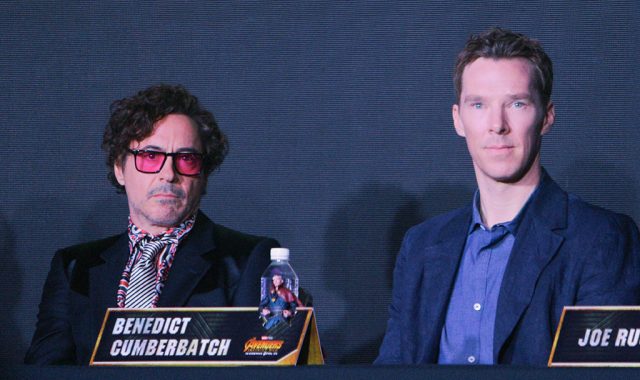 But by placing Doctor Strange and Iron Man, two of MCU’s biggest alpha males, together, wouldn’t there be a high chance that it would lead to a clash of strong personalities, both seeking to take charge?

“No!” Cumberbatch jovially quips, resting his hand on Downey Jr.’s shoulder in a friendly manner, while Downey Jr. responds straight-faced with “Get your hand off me!”

“Duelling goatees!” goes Downey Jr. before saying, “Being a big fan of the Doctor Strange standalone too, if you think about it logically, Strange is the guy who actually can, if he has the wherewithal to do it, run through all the outcomes and figure out what the most likely scenario is going to be.”

“Once Tony recognizes that that’s something that, even though he thinks it might be within his control, ultimately there’s a spiritual solution and if someone has the ability to have that kind of intuition you can only stay at odds with him for so long.”

“Yeah, we have a bit of a clash and that’s no bad thing, and something to enjoy in the film, without spoiling anything, is to see how that relationship unfolds,” agreed Cumberbatch.

The largest gathering of Marvel characters has naturally included the cast of Guardians of the Galaxy, and the ever-so-pleasant Karen Gillan lit up the room with her lilting Scottish accent. Her character, Nebula, is actually one of the rare Marvel villains that have survived across multiple movies, and Gillan expresses her excitement as she says, “I’m honoured, it’s very exciting to get to be in more than one Marvel movie! I love this character because initially, she was a villain, and then we learn more about her backstory and then we start to question whether she was a villain or not.” 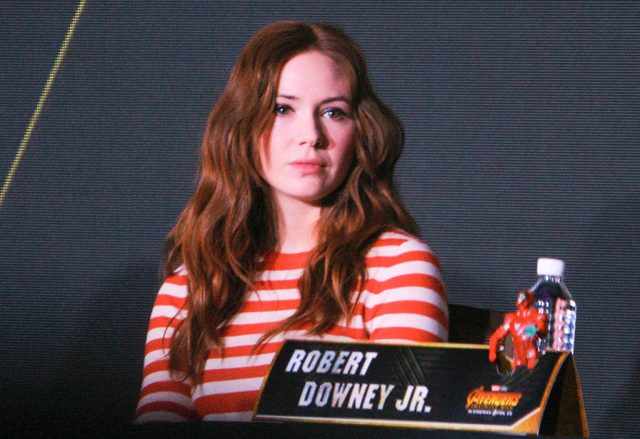 And taking on the role as a villain, after a highly successful turn as a companion on cult series Doctor Who, was a no-brainer for her.

“I just got a phone call from my agent asking me if I’m willing to shave my head, and I said what for, and they said Marvel and I’m like yeah! I mean that was a pretty easy one. When I got the role I was just completely over the moon. Marvel was already such a huge thing by that point and I was just so excited to play this villainous fun creepy weird character,” shares Gillan.

In contrast, Downey Jr. joined as Iron Man at the dawn of Marvel superhero films, where its eventual success was pretty much unassured. So why did he do it?

Explains Downey Jr, “I needed a job. Bad. And I really believed in Favreau and Feige, and I believed in Marvel Comics. I was like well, we’ll do ours and we’ll give them some counter-programming for the DC movies, which were supposedly the cool ones, so you’ll never know. It’s always weird when you’re part of anything even mildly historical because you lose perspective on it, but it has been amazing to just get caught up in it,” he says.

As for executive producer Trinh Tran, she expertly fielded a question about how she rose up the ranks as a female in a male-dominated industry, and told journalists: “I’ve actually been at Marvel for a long time and I started as an assistant there 10 years ago. Marvel has been a family to me and they were very supportive in bringing me up and allowing me to grow in the position that I am in now, and I think it’s very important to have female voices in the film industry, especially nowadays.” 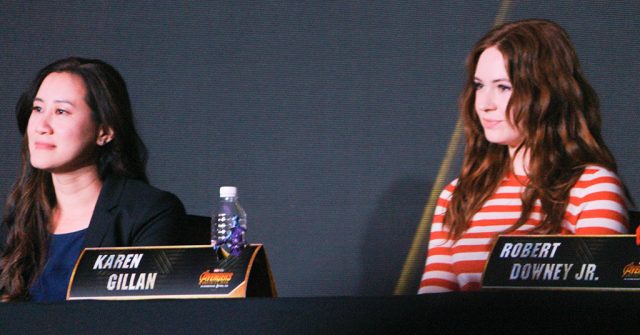 In the midst of all the serious questions, there was time for a lighthearted one too. The ending of Spider-Man: Homecoming saw the engagement of Tony Stark and Pepper Potts (Gweneth Paltrow). So will there be a white wedding? Don’t bet on it says Downey Jr. jokingly, “I don’t have any spoilers, but what happens is Nebula comes between us, and so it becomes a sort of a European thing?”

The audience roars with laughter as Downey Jr. chuckles abashedly and says, “I think I need more sleep.”

And while Infinity War brings together the largest cast of Western superheroes in a single film, don’t expect Team Marvel or the Russos to repeat themselves. If there is one thing any franchise needs, it is to constantly keep things fresh.

“I read in some magazine that the number one voted moment was the airport fight in Civil War because there were so many superheroes,” shares Downey Jr.
“Now the universe has expanded even more, but I think one thing that the creatives always don’t want to do is do a bigger repeat of something that’s already worked well.”

“Without giving anything away, I think that the challenge this time was how do you top or expand something without repeating something that’s already been executed well before. I call it the anti-process, because usually if something works, then you’re just gonna keep doing that.” One thing they have going for them is that the passionate cast and crew of Avengers: Infinity War are dedicated to ensuring the movie is the best that it can be, because this isn’t just a paycheck. As Downey Jr. says, “We might be making the movies, but we’re also fans and critics of our own work and always want to try and make it better, and I think this time we might’ve nailed it.”

Recalls Russo, “Logistically, without question, the most complicated movie in history to put together. I think we shut down Hollywood for a year because we had every actor working in the business scheduled somewhere in the movie.”

So how passionate is Joe Russo with the cinematic universe he has inherited? Well, let’s just say that he’s not afraid to call people out for it when necessary.

Members of the press were treated to an advanced screening of about 25 minutes of footage from Infinity War the day before the press conference, and a member of the press, Kiss 92FM DJ Jill Lim, decided to risk spoilers and ask them why Tony Stark, arguably one of the best known futurist in comic books, was seen using a flip phone in the advanced screening.

Let’s just say she came to regret this decision, as Russo gave a most savage response.

“That is the burner phone that Captain America gave Tony Stark at the end of Civil War. So if you’re a Marvel fan, you may remember this.”