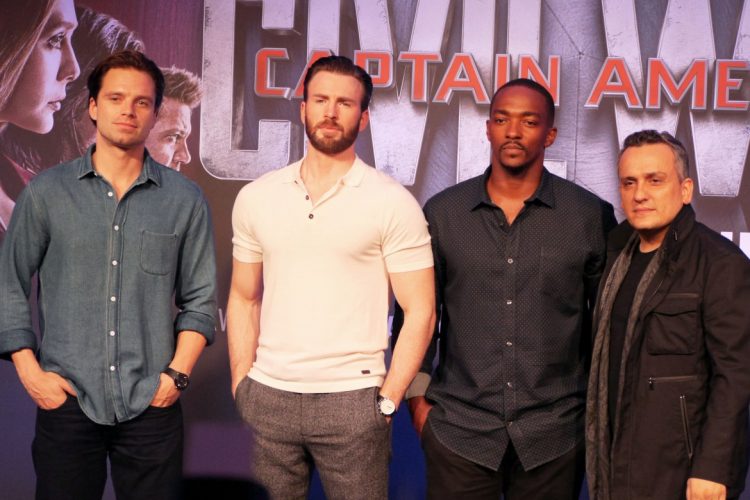 Led by co-diector Joe Russo, #TeamCap was in Singapore for the exclusive Blue Carpet event in Singapore and we managed to catch up with them at the press con.

Chris Evans (Captain America) was all smiles and oozed friendliness as he took the stage while Sebastian Stan (Winter Soldier) looked like he was freshly defrosted just for the press conference. Anthony Mackie (Falcon) was ever jovial and eager to banter with the crowd while Joe Russo was largely more thoughtful and engaging with the assembled press.

The actor trio showed an interesting chemistry, with Stan being a little closed and on the quieter side while Evans and Mackie were more playful and open, reflective of their characters’ personalities in the
movies. It seemed very much like life imitating art for the most part.

Explaining why audiences should catch the movie, Russo said, “It’s a complex story that you could a call it a combination film of every Marvel story that has preceded it because it brings all the characters together in a big family fight. The performances are exceptional, we have a great cast. It’s heartbreaking but also a great deal of fun. I think you are going to have a really well rounded experience at the movie.”

With regards to having all the Avengers back in the movie Russo explained that it was simply amazing. “I think the thing that makes the Marvel universe special is the character interaction. I think this film has more character interaction than any film that preceded it in the Marvel cinematic universe. And you’ve got Captain America versus Iron Man, what more could you want?”

And what was it like to direct such amazing stars and make the movie?

“It was pretty incredible directing this cast. I say it’s like a Steven Soderbergh-level of cast. I think Marvel has done an amazing job off filling out the Marvel cinematic universe with some of the best actors in the world. It makes my job very easy.”

Russo humorously explained the team picking method by saying, “We flipped a coin” before turning serious, “We sat in the room for months with the writers and went through the cast that was and wasn’t available to us and we thought very hard about who would line up against who, based on their motivations. And of course we looked for some surprising choices so that it wouldn’t be entirely predictable. And that’s how we drew up the teams.”

“The other unprecedented thing that Marvel is doing is this long-form storytelling on a scale that we’ve never seen before. Sure we’ve seen sequelisation, but this is taking different characters from different franchises and weaving them into one big story.”

Russo paid tribute to his cast saying “These actors, because they’ve played the parts so much, they know the characters better than my brother or I ever will so they are the true caretakers of the characters.”

On the production side he highlighted, “Shooting the airport scene was amazing, it was a dream you have as kid who collects comics, it’s a dream come true, to see who would win against who.”

When asked about the off-screen battle between Team Cap and Team Iron Man, Evans was confident that fans in Singapore would be able to meet and beat the standards that Team Iron Man in France. Evans said, “I think the entire battle itself will help the movie. The more buzz, the more energy we can create is only going to help the films.”

Asked to describe the movie in one word, the actors thoughtfully replied “heartbreaking” (Stan), “record-setting” (Evans) and “ass-kicking” (Mackie). Feigning disbelief, when the crowd reacted to Stan’s response, Evans jokingly asked the crowd “did you not relate to record-breaking?” Causing a ripple of laughter to go through the crowd. It’s clear that their different stance on the movie is telling of their characters’ roles.

Evans also shared that the most challenging scenes to shoot in the movie weren’t the action scenes but the emotional ones instead.

“The action is exhausting and physically demanding but I think what is harder is in terms of approach as an actor are the emotional scenes. There is a much greater personal responsibility in those scenes. The emotional moments are up to you and the directors, which is why Joe and Anthony are so fantastic. They have a great understanding of cinema and they know how to give simple directions so you know what the scene needs.”

Evans and Mackie were clearly very comfortable with the press con atmosphere, often sharing knowing looks and laughing at private jokes. Stan on the other hand was more sombre, though a rare smile peeked through now and then.

Was there any special preparation for the Blue Carpet? “Yes, la! No la!” says Mackie emphatically, “We don’t prepare anything special, but we do make an effort to get to know the culture and eat the foods like Chilli Crab and stingray. We really enjoy stuff like that,” which he jokes is different from Team Iron Man who “just go from the press conference to the spa, from the spa to the jet, you know stuff like that.”

Do they have a favourite onscreen hero or villain? You bet. While Evans tried to buy time by padding the question, “that is tough,” he said, “a good, good, good question”, Mackie unhesitatingly jumped to the mic and replied “Micheal Keaton as Batman!” Evans shot back that he was about to say Keaton as Beetlejuice. Stan breaks his silence by offering, “Danny DeVito as Penguin” and Russo adds Gary Old from The Professional to the mix. Evans mentioned Michael Bean in “anything” and Mackie threw in Kathy Bates from Misery. They also make quick a note of Macaulay Culkin as a hero in Home Alone and Eddie Murphy from the Nutty Professor.

When asked about his bird suit, Mackie makes mock threats, “upset” at the name calling. He channels his inner Samuel L. Jackson with an unspoken, say that again I dare you, I double dare you Motherf*****.

But he was quick to humour the crowd with by giving goofy names to the members of Team Iron Man: Coke Can, Perfect, Trash Can, Magic Marker and Michelin Car Tire (can you guess who’s who?). The crowd responded with peals of laughter as Evans added, “Vision looks like he got drunk and everyone started drawing on him” and Stan chirped in with, “Don Cheadle looks blind in this poster.”

When given his choice of super-heroines to choose from as a paramour, Evans asks if Halle Berry counted and said, “Let’s not forget Catwoman.” Unfortunately Cap, we’re going to have to disagree, we really would rather just forget that that movie ever existed.

Evans delved deeper into his character and shared that Captain America’s romantic choices are greatly dependent on where he lives, Peggy Carter and Sharon Carter (who he sees as a reincarnation of Peggy) as well as the story’s plot. He mentions the Black Widow, saying that there is a nice platonic relationship and it would be an interesting dynamic to pursue but it was sweet that the relationship didn’t go further.

And just how important is Captain America: Civil War to the Marvel cinematic universe? “Incredibly,” said Russo, “I think this movie changes the psychology of the Marvel universe in a very significant and important way and the ramifications of Civil War are not yet over. They’re going to carry over significantly in Infinity War…they put the characters in a complicated place. Possibly the most significant Marvel Movie to date.”

#Team Cap will be in Singapore for the weekend, with a special event happening on Friday night at the Helix so be sure to drop by and remember to hashtag your images uses #TeamCap #ChooseWisely.