Based loosely on the eponymous massive cross-title Marvel comic event, the third installment of the Captain America series is quite possibly the best Marvel movie to date. It’s a prime example of what Marvel movies do best: juggling multiple characters while telling a well-thought out story that is a stepping stone to the bigger picture.

The movie essentially revolves around the argument of “Who Watches the Watchmen?”

After the disastrous results of their latest heroic caper, the United Nations, and the world, has decided that the Avengers need to be corralled. Citing the catastrophic aftermath of the first two Avengers movies as reasons why the team needs to be held accountable for their actions, the United States Secretary of State, General Ross (William Hurt) gives them two options; register and be a part of a UN managed team or resign and give up the super-heroics.

While the team is squabbling over who’s right, a bomb blast at the UN shoves the previously missing Bucky Barnes (Sebastian Stan) back into the spotlight as a murderer yet again. This sets off the physical fight between #TeamCap and #TeamIronman before throwing everyone towards a mind blowing finish that you’ll be feeling for long time after the movie.

There are many references in the movie to what happened in Age of Ultron which will lull you into mistakenly forgetting that this is a Captain America movie and not an Avengers movie. Additionally, the appearance of the entire team, plus the introduction of new characters, does add to the rowdy rumble effect that we’re used to seeing in the team movies.

Fortunately the Steve/Bucky bromance digs its claws deeply into this movie and is what prevents the movie from becoming Avengers 2.5 instead of Captain America 3.

The traumatised Bucky Barnes is played by Sebastian Stan. Stan shows Bucky’s fear, tension and confusion clearly only through the powerful use of facial cues. Stan occasionally slips in moments of the roguishly charming pre-Hydra Bucky which adds more dimension to the character.

It’s amusing to see Captain America’s spoiled side in the film which comes across whenever he tries to insist he’s right. Chris Evans continues to maintain Captain America’s air of casual authority and purposeful naivety. You know he’s the boss, but he’s your friend-boss. It’s interesting to see Steve break his own rule-following archetype, especially when it pits him against a friend for a friend and nice to see him grow throughout the movie.

Robert Downey, Jr.’s Tony Stark is a painfully conflicted man. It shows through his small actions like his tightly griped fists and barely controlled voice, that he is aware of the repercussions of his choices as he makes them. He is desperate to save the Avengers. Downey, Jr. portrays Tony’s angst well, going beyond the bodily expression. He is able make you feel the hurt in Tony’s eyes as Steve rejects him and for a moment, you forget that the movie is actually about Captain America and not Iron Man.

The bromance is very, very strong in this film, with Tony often coming off as jealous of Steve’s not-quite-ex-friend.

Oddly enough, it’s the supporting characters that often steal the scenes with their reflective and emotional tone.

Watching the Vision (Paul Bettany) develop human-like idiosyncrasies is strangely touching and despite his limited understand of emotions, he clearly has something for Wanda. Elizabeth Olsen plays a decent Scarlet Witch who is slowly growing out of her shell as she explores her abilities. Olsen occasionally drops her Russian accent, but it’s barely noticeable. The playful banter between the two is sweet and endearing.

Ever the double-agent, the Black Widow (Scarlett Johansson) is torn between her two friends. She can clearly both perspectives and despite choosing a side, well, she IS a double-agent, so there.  Johansson’s most impressive scenes come from her fight sequences that serve as a clear reminder that she is as deadly (if not more so) than her male counterparts. It’s nice to see a female character consistently standing her ground and taking down physically bigger, more skilled and (sometimes) super-powered males. Also, the Widow Bite? Much squee!

The previously-retired for 30-seconds Hawkeye (Jeremy Renner), who is missing for most of the movie, shares casual crosstalk with the Black Widow during their fight that  shows how deep their friendship goes – they are clearly able to accept their differences and yet remain friends (a feat that Captain America and Iron Man clearly cannot pull off). 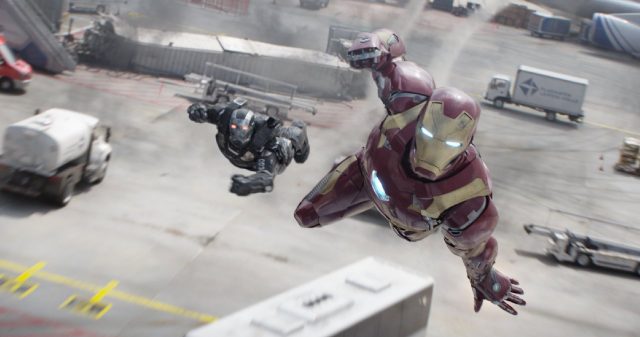 Falcon (Anthony Mackie) and War Machine (Don Cheadle) are basically the “bros”. They’re a mirror of each other. Mackie plays up the Falcon’s smart-ass, slightly immature and jock-like character while Cheadle is the older, more mature and weary war vet.

Scott Lang (Paul Rudd) represents every geek in the cinema. He is able to make his fanboy moment extremely relatable with his wide-eyed awe. His contribution to the fight scenes were unexpected and his chichat almost on par with Spider-Man.

New to Marvel cinematic universe is T’Challa/Black Panther (Chadwick Boseman). His character is driven by very different motivations, compared to Steve and Tony, which adds extra depth to the fight. Boseman’s T’Challa is suitably rash at the start and makes exceptional character growth by the end of the movie. He’s not as haughty as the prince of Wakanda should be but he can be quite charismatic.

Another “new” character is Spider-Man. Tom Holland plays an extremely lovable, youthful Peter Parker who clearly doesn’t know what he’s gotten into. He’s been sweet-talked by Tony into joining his side of the fight without fulling understanding the situation. Holland’s Spider-Man comes with full chatter and wise-crack remarks which makes lightens the atmosphere just a little. His Spider-Man is just growing into his character and it will be interesting to see where it goes in his own movie. And although amusing, unfortunately, Spider-Man really wasn’t an essential character to the movie (unlike the comics). The introduction of the character was smoother than his exit.

The script deals with off-screen characters well by casually tossing them into conversations instead of making blatant mentions. It also manages to make mentions of characters that belong to the spin-off series and tie them back to the current situation without muddying the waters. The characters are given lines that are extremely believable; they sound as natural as they feel and there is a lot less over-acting in this film, which just shows how much the actors have grown into their roles. The script manages to squeeze in little character nuances that speak volumes without saying much. The pacing is decent, if a little ponderous at the start. The usually funny banter comes quite late into the movie probably so that it doesn’t distract from the serious tone that is set at the start.

Visually, the movie was stunning, especially since there was more use of practical effects over CGI. Plus, the versus fight is everything you could hope for and more. It’s a well-choreographed mess. There are characters darting all over the place, there’s a dogfight between Falcon and War Machine (of sorts), arrows are uselessly being shot, Captain America’s shield is tossed all over and Wanda somehow manages to always save her teammates in a timely manner.  The fight sequences were creative and the match ups aren’t always what you expect them to be. The fights showcase the characters at their best – Spider-Man’s agility, Ant-Man’s shrinking and growing ability, Black Panther’s cat-like ferociousness and Wanda’s developing strength at telekinesis.  There was a lot of thought that went into how to best use the characters and their skills and it shows. 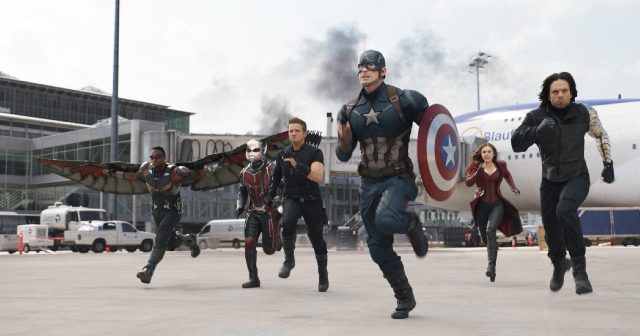 Captain America: Civil War smoothly continues the story from Age of Ultron while merging it with the contents from Winter Soldier. It tries its best to fix the holes in Age of Ultron while telling it’s own story. Extremely emotional and action packed, the movie is filled with anticipation that both fans and non-fans will enjoy.

We’re all winners in this war.