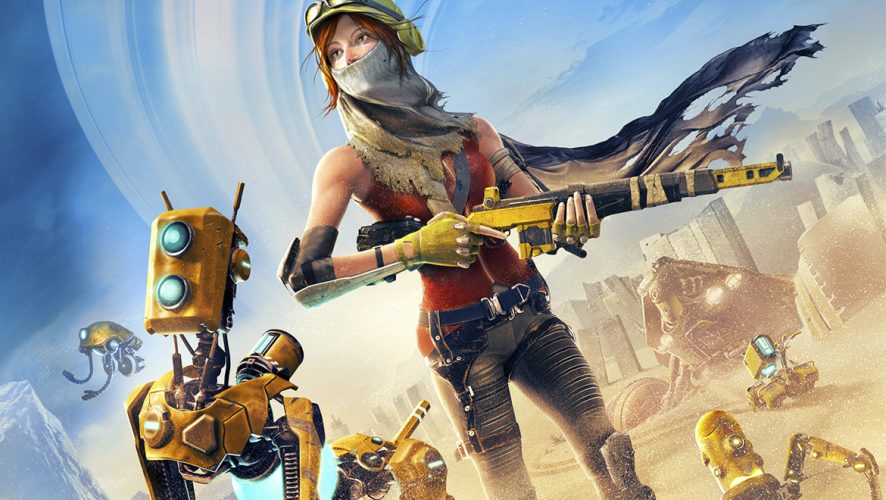 I have to admit, I knew very little about ReCore prior to starting up my review copy. With regards to Xbox One exclusives this year, other titles such as Quantum Break and the upcoming Gears of War 4 held most of my attention, and ReCore pretty much slipped under my personal radar. I essentially went into this review completely blind, and it’s been a while since I’ve done that. It did, however, give me a great opportunity to look at ReCore with a fresh eye.

ReCore starts the player off with little to no explanation as to what is going on. The protagonist, Joule, is roused from her slumber on Far Eden, a planet potentially ripe for human colonization – at least, that was the plan. It’s established relatively early on in the narrative that something has gone seriously wrong with the terraforming effort, and Joule has actually awoken centuries later to a desolate planet populated by killer machines.

While the setup isn’t particularly original or refreshing, I found it compelling enough to pique my curiosity. It’s clear that there is more to the story than initially meets the eye, and it’s up to the player to guide Joule and her mechanical CoreBot companions around Far Eden to find out just what happened.

To that end, the player will be navigating the treacherous surface of Far Eden, trekking across barren deserts and delving into ruins. Fortunately, ReCore grants players with a good amount of mobility right from the get-go. Joule has access to a ground dash, a double jump, and an air dash upon starting the game, which confers a strong sense of unrestricted movement upon the player.

There is plenty of verticality to be found in ReCore, with lots of sheer cliffs to scale and underground constructs to explore. The platforming is relatively forgiving, and Joule can fall from great heights without injury, which does make the prospect of missing a jump a much less stressful experience.

The game is structured in non-linear fashion, and there is a central “hub” in the form of Joule’s Crawler – a large vehicle that serves as her makeshift home and base of operations. Players are encouraged to explore the desert landscape to find a variety of collectible items, such as audio logs that flesh out the story, as well as various mechanical components that can be used for crafting and upgrades. Common enemies respawn in the open-world areas, giving the player plenty of opportunities to earn XP and pick up loot.

A workbench from which said crafting and upgrades can be performed can be found within The Crawler, which also grants the player access to a central stash for all the loot Joule will come across on her journey. Joule can fabricate and install new components for her CoreBots at the workbench, which can improve their offensive, defensive and utility attributes. This in turn enhances the effectiveness of the CoreBots in combat.

Combat, however, is not ReCore‘s strong suit. The game adopts an auto lock-on mechanic ala Metroid Prime, and players don’t actually have to take aim at enemies, which simplifies combat a little too much for my taste. I suppose it was necessary, given the fact that players would be making full use of Joule’s extreme agility during combat, and having to manually aim shots while zipping through the air would have been too difficult for the average gamer.

Holding down the trigger fires Joule’s rifle in fully automatic mode with low damage output, while charging a shot with the bumper unleashes a large bolt that inflicts much more damage, and can inflict a variety of status effects on enemies, such as setting them on fire or stunning them. These status effects are dependent on the type of ammo Joule is currently using, which are helpfully color-coded and logically deal more damage against enemies of the corresponding color.

While this sounds like an interesting mechanic in theory, the concept doesn’t hold up as well when the game decides to throw a room full of multi-colored adversaries at you. Having to switch to the right color in the heat of combat can be quite an exercise in frustration, especially when coupled with the finicky targeting and limited field of vision when locked on.

After having taken sufficient damage, enemies become vulnerable to Joule’s Extractor, which is essentially a harpoon that allows her to yank out an enemy’s power core. A tug-of-war style mini-game initiates when the harpoon is triggered, and visual cues tell the player when to pull hard or ease up.

However, much like the colored ammunition, this is an interesting concept that simply does not work well in practice. Joule is rooted to the spot and completely vulnerable to enemy attacks during the mini-game animation, and thus opportunities to extract an enemy’s core don’t come very often. For a game that emphasizes mobility, this is completely antithetical to ReCore‘s central design.

The CoreBot companions do add some nice variety to combat and exploration. Each CoreBot fulfills a different archetype and comes with a set of unique abilities. For example, Mack the dog can sniff out hidden goodies much like a real canine, and Seth the “Escape Artist” can help Joule reach hard-to-reach places by letting her hitch a ride while he crawls up and along vertical surfaces.

Each CoreBot also has it’s own color attribute, which works in the same way as you would expect, allowing them to excel against specific enemies. Given that the CoreBots have pretty competent AI and can mostly be left to their own devices in battle, I got the impression that the color mechanic works much better for the CoreBots than they do for Joule.

ReCore is a generally entertaining romp in it’s own right. I found the CoreBots rather charming in spite of their stereotypical design, and I felt they had more personality than the protagonist. Combat, however, feels somewhat half-baked, with a number of conflicting mechanics that don’t hold up under the game’s lightning-quick pacing. The developers clearly had some big ideas for this game, and it’s unfortunate that the final product fell short of those lofty goals.

ReCore is a mishmash of several ideas that look good on paper, but don’t actually complement each other well in practice. The game is still pretty fun and retains a good amount of entertainment value, though it doesn’t quite live up to the pedigree of some of it’s creators. Metroid Prime this ain’t.