Based on The Asterisk War novel/manga/anime series, which is popular in Japan and the US, A.W Phoenix Festa features both romance and action combat genres in one package. This sets the stage for a mixed action game, with a side dish of dating simulation for the fans.

Players start off as a new student entering a semester, with the goal to win the Phoenix Festa fighting tournament. Players have the option to play as the main character, Ayato Amagiri, or a custom-created character. If you’re new to the series/franchise, I would recommend playing as Ayato Amagiri, as this makes the game easier to learn. Ayato starts off with more balanced stats, and gets a popularity boost with the female characters you meet during the game.

On the other hand, playing as a custom character is similar to playing in the “hard mode”, to obtain a more challenging experience. Here, players start off with lower stats, and will need to put in the extra effort to be stronger in combat, and to improve relationships with the girls in your campus. (Gee, sort of like in real life.) 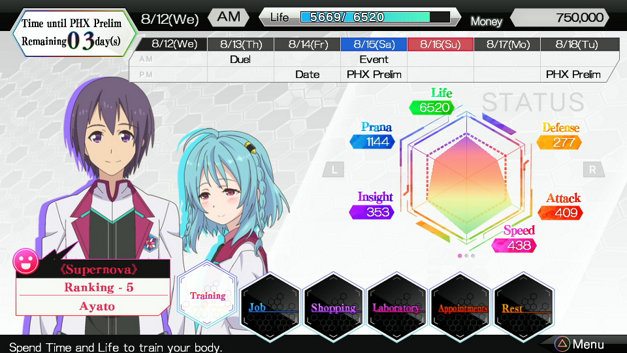 The game plays very much like an interactive novel, where the story is progressed through dialogue between characters. This allows the character to be placed in rather interesting romance related situations such as girls dropping hints about their feelings towards you. Players can choose how to spend their day doing various activities such as training, shopping for weapons or gifts, researching and resting. Each activity takes time and will progress the day, requiring players to manage their time to do various other activities, such as training to increase stats and dating to improve the romantic side of things. Only jobs and dueling takes place in a 3D combat arena, and all other activities happens in the form of character dialogues or pop-up menus. 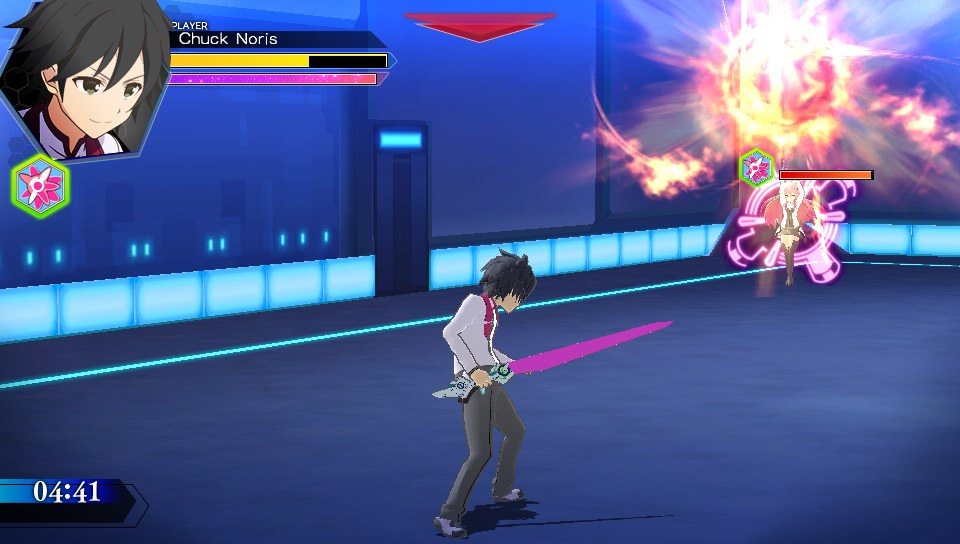 The combat in the game uses cel-shaded art style, and takes place in third-person mode, and plays similarly like other third person brawler games, such as Gundam Breaker 3. Players who have played such games will have no difficulty picking this up, though initial combat will be sluggish and slow, since the character’s speed attribute will be slow. One thing I like about the game is that apart from battling fellow students, some of the battles require the players to battle impressively designed mecha-based enemy, adding more variety and excitement to the battles.

As the character progresses and increases his stats, the character will become more responsive as the speed attribute increases. Also, as the player earns more money by performing jobs, he is able to upgrade and purchase and use different weapon types in combat. 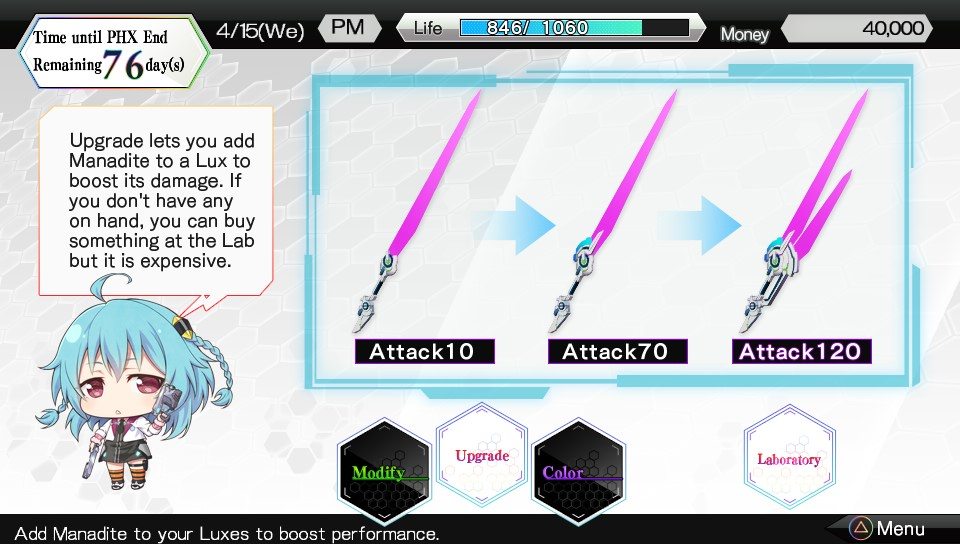 A.W Phoenix Festa has 2 parts in the game. The first part of the game requires the player to find a tournament partner before 30 days are up. In order to get a partner to agree to team up with you, players would need to spend time to purchase gifts to build a strong relationship with a potential tournament partner.  The second part of the game starts after the 30 day mark, where the player would need to train with his partner, to try to win the Phoenix Festa fighting tournament. From here onwards, players will get to fight 2 v 2 battles, whereby you can chose to control either yourself or your partner.

The game requires players to play through an entire day, and it can be quite repetitive as you have to go through many days of game loops, to progress the story-line. I found a large portion of my time spent performing activities and reading text through the menus. Thankfully, the game presents very nice illustrations to accompany with the text. As the game progresses, it gets exciting when your character gets more powerful in combat, and starts getting popular with his female school mates. Occasionally, the player will get random visits from school mates asking to duel or date. This allows the game to present the character with a different story arc. 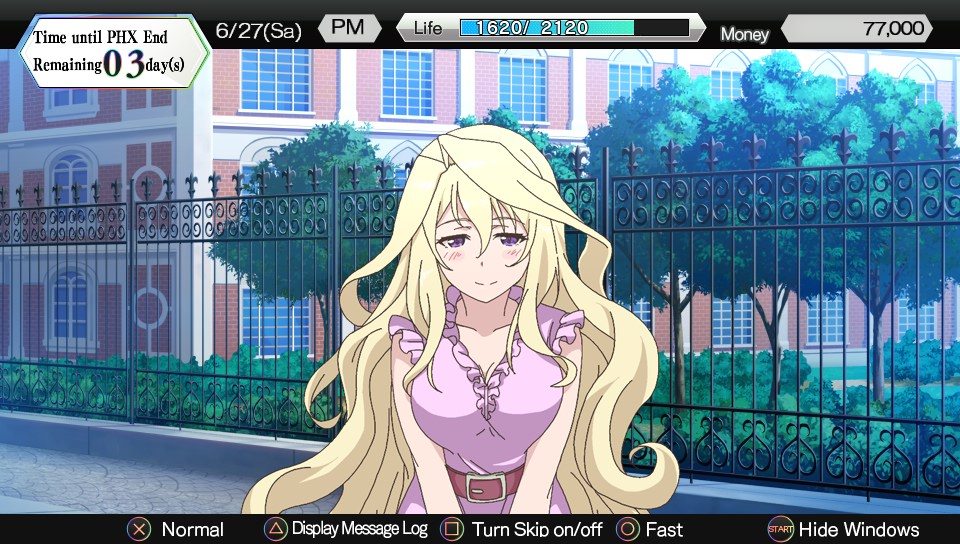 The highlight the game would be also to go on dates with girls from your school. A.W Phoenix Festa features four girls for your character to date – Julis, Claudia, Saya and Kirin. Each girl has a different personality, and preference for gifts, so gifting the girl the right item will make her to like you even more. Players can ask a girl to meet for a date, but she will accept the date only if she likes you (DUH!).  The real goal is to partner one of these girls for the A.W. Festa tournament, as each lass has a different fighting style and skill to contribute. Players can replay the game a few times, to experience what it is like fighting alongside each girl.

Besides having different partners, the game has an achievement system and a gallery to unlock images, to add replay value. The game also allow players to carry their stats into a new game, so there is no need to re-level your character. So it’s kind of like dating a girl, breaking up with her and moving on to another girl.

A.W Phoenix Festa is a game that will appeal to fans of the Asterisk Wars series, as they are probably the ones who can truly appreciate immersing themselves in the series universe. As a standalone dating simulation game (even with great art) though, the game can get rather repetitive, as players are stuck with doing the same jobs, and spending time navigating the game’s menus.

As the player gets more popular as the game progresses, the game gives the player the experience of a character in a “harem” anime. A.W Phoenix Fiesta offers four girls for you to court and date. Also, winning the A.W Phoenix Fiesta Tournament with each different girl as a duel partner will trigger different endings. A minor gripe is that the game only teases the main story arc from the A.W Phoenix novel and anime series, and doesn’t go deep into the A.W. Phoenix story-line .

The game’s art-style and cut scenes, and the combat sequences are visually impressive and they are the main factors why one would enjoy playing the game. The game is designed to be short so that the player can replay the game multiple times, but get extremely repetitive fast.