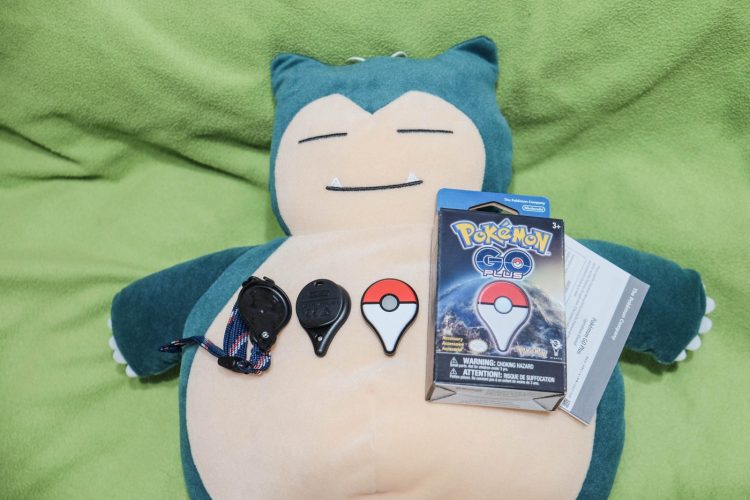 Dear Pogo fans and players, this is the mother lode. It’s what you’ve been waiting for since Pokémon Go came out. It’s the key tool to any player; the lightsaber to Luke Skywalker, the shield to Captain America, the Clark Kent persona to Superman, the Yin to the Yang, the Pokémon Go Plus to any Pokémon Go player.

Although it retails for USD$35, it is currently sold out world wide, and 3rd party sellers on Amazon are selling it for about USD$100. I was lucky enough to grab a set of the much coveted Pokémon Go Plus Bluetooth dongle (from a secret source), and took it for a spin. And guys. You want this. No scratch that. You need this.

The packaging is pretty small, but it managed to fit the Pokémon Go Plus device, the wrist strap and the instruction sheet. The Pokémon Go Plus device comes attached to the clip attachment, and it uses a button type R2032 battery and is not rechargeable. I opted to change out to the strap instead, but to do this, a screw driver is needed to change the clip attachment to the wrist strap attachment. You even need it to change the battery when it runs out.

The wrist strap covers the screw, and I had to loosen the strap before tightening the screw. The wrist strap is fully adjustable and can easily fit my Snorlax-sized wrist comfortably. While purchasing this Pokémon Go Plus, I noticed that there were already 3rd party accessories to customize the front of the Pokemon device, and was tempted to also purchase a accessory to represent my Team Instinct.

Before pairing the Pokémon Go Plus, you will need to ensure that your Pokémon Go app is updated to the latest version, and your Bluetooth is switched on. After that, simply go to the settings menu and pair the device as you would any Bluetooth accessory. After you start the pairing process on the app, click the Pokémon Go Plus button and you will feel it vibrate, confirming that the device is paired.

As for using the device, simply read the self explanatory quick start guide within the app itself:

Running it in the background

I could attempt  to catch any Pokémon creatures I came across, and even spin for items at Pokestops too. This proves that the device does runs in the background, regardless if the phone’s screen is on or off. This was pretty useful as I could do other things with my phone, like using it to surf the web, chat with friends and send emails. As the game runs in the background with the screen off, the Pokemon Go Plus can be used to save your phone battery. Or when you’re cycling, scooting or jogging. You name it and the device covers it.

Gotta Catch (some of) them all

Here’s the catch. With the Pokémon Go Plus, you can only attempt to catch any creature you’ve encountered, once, and with a normal Pokéball. Pressing the button is a guaranteed hit on the Pokemon however, but you cannot perform fancy curve balls, so there is no way to get extra points for “nice”, “great” or “excellent” throws, or to even use your berries. Based on this single normal throw, the game will decide if you catch the Pokemon, or if it runs away and the process of capturing is as random as if you were swiping on the screen.

You can check out my rather abysmal catch rates using the device below:

Another feature of the Pokémon Go Plus is that you can spin for items at Poke-Stops, without actually spinning them on your phone. Just like the game, I need not be directly under the spot to spin the Pokéstop. Also, the Pokémon Go Plus will auto detect spun PokeStops which have just refreshed and will notify you that you can spin it. This is great for camping and spinning Pokéstops while you are stationary in one location doing other things.

Although it is definitely more efficient to play Pokémon Go on the mobile app itself, especially when hunting for rare Pokémons, owning a Pokémon Go Plus is still useful for me. Rather then totally missing out on catching Pokémons when I am out with friends or family, I can see simply tab the device to catch anything, to level my XP and to collect more stardust (it’s a looong way to level 40 after all. T_T). This also allows me to devote my attention to any social activity.

The one ball throw feature is also actually useful to conserve Pokéballs, as it forces Pokeball discipline, and prevents me from spamming all my Pokéballs at a single Pidgey. Another very useful feature is the distance tracking, so I can easily cycle slowly to hatch eggs, without risking damage to my phone.

And there you have it. If you do come across this device on sale, treat it like a rare Pokémon. You have to do whatever it takes to get your hands on it.