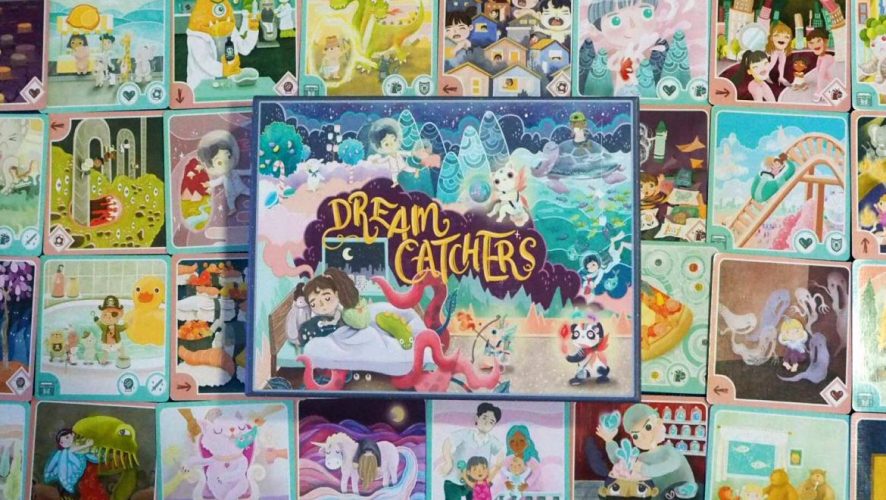 We’re no stranger to nightmares. Even if you have, by some lucky chance, managed to avoid having some of the more bizarre, terrifying things pop up in your subconscious, modern horror movies are all about that. Think of Pennywise from IT, for instance, picking out a child’s worst fears, and turning them into reality. Did anyone say Freddy?

Here comes Dream Catchers, by Play Nation Studios, a cooperative board game for 2-4 players that requires players to work together to collect sweet dreams and defend a sleeping child’s night from being taken over by nightmares. 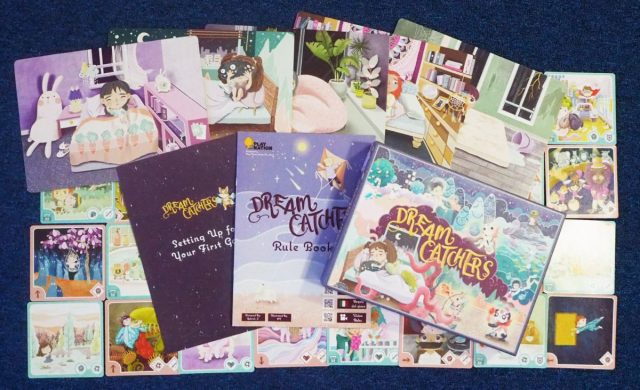 Play Nation Studios is the game publishing arm under Play Nation Pte Ltd, the gaming cafe chain from Singapore with a focus on family-friendly gaming. They were awarded the Spirit of Enterprise in 2013. Play Nation is the company responsible for Limpeh Says, the Singaporean version of Cards Against Humanity which raised $121,000 for its Kickstarter Campaign.

The game is meant to last 25-30 minutes each board, and was no doubt dreamt up by those who want all dreams to be safeguarded at night, so that the only things we see in our sleep are happy memories. Now players get to live out that fantasy as they take on the role of the protector.

The objective is for the players to work together, to catch as many sweet dreams as possible, while working against time, nightmares and monsters to put the child to blissful sleep before the end of the night.

The game setup consists of a Dream Scape – 9 dream tiles, the game board, a treasure chest and power cards. Each player draws a character card, which denotes one unique move they’re able to make – such as an extra turn, the ability to stop time, or to view the next card in the deck – and 4 power cards.

The dream tiles (which consist of Nightmare tiles and Sweet Dream tiles) are marked with symbols at its bottom corners, which need to match the symbols at the top corners of the power cards, in order to be removed from the Dream Scape. Catch a nightmare to remove it, decreasing your chances of it being used against you; catch a dream to advance one space towards winning the game. 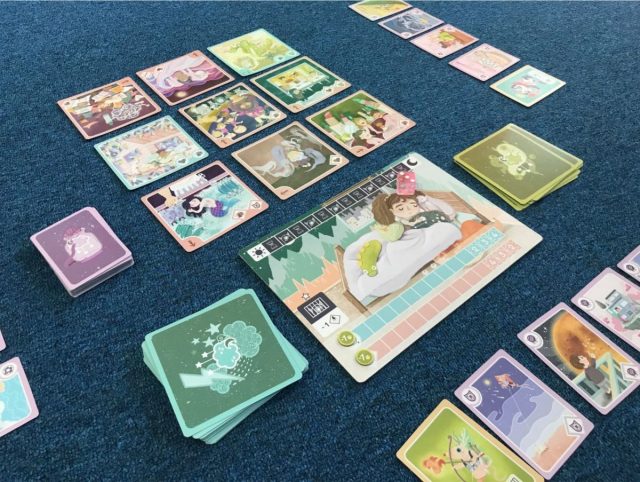 In the Dream Catcher phase, each player is given the chance to perform 2 actions out of a possible 5. In this phase, the players have the chance to trade power cards with other players, collect sweet dreams and eliminate nightmares from the Dream Scape, or defeat monsters.

Trading cards is one of the ways that characters can pool resources; if a player needs one particular card to perform an action, he or she can trade for that card with another player. Or players may set up future turns by trading certain cards to a certain player so that he may ultimately perform an action. For example, if a player needs 2 heart cards in order to stop time, other players may trade the card during their turn, so that the player need not spend an extra turn trading the card later on.

Once the Dream Catcher phase is done, the player’s turn moves to the Night phase. If the tile counter lands on a monster, it means that a new monster is added. The monsters remove Sweet Dream tiles, and the empty slots in the Dream Scape are replenished. If a monster has not been defeated, it attacks the Sweet Dreams in subsequent Night phases. 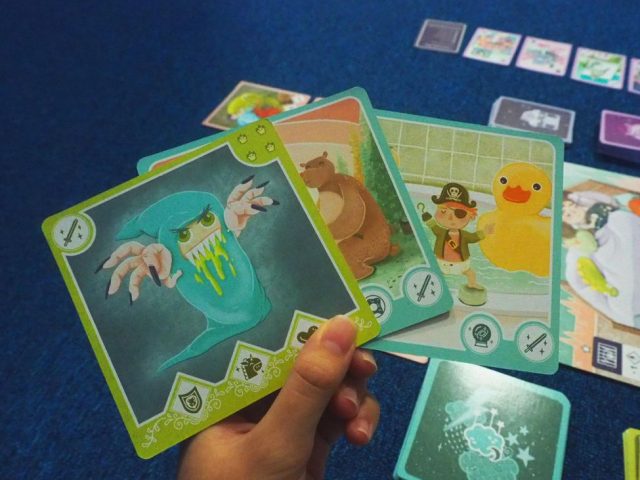 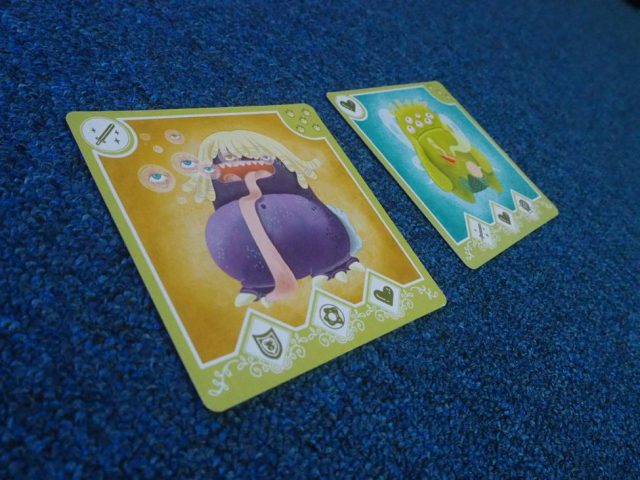 If the new additions to the Dream Scape are Nightmare tiles, those tiles are considered “active”, and that tile seeks out other Nightmare tiles with matching symbols. If two adjacent Nightmare tiles share a symbol, they are both removed from the board, which advances the Nightmare track. During this time, monsters attack sweet dreams, the Nightmare cards become active, and each Nightmare card which is eliminated during the night brings you one step closer to losing. After the Night phase, the player’s turn ends.

As a cooperative game, every player has to weigh the possible outcomes in each player’s turn, and collectively decide on the best strategy forward. The game’s strategy is honestly not apparent at the outset, only by playing the game a few times can players understand how the game works, and anticipate the possible risks that they face with each turn. It’s through figuring it out together that the team learns to cooperate.

This game took some getting used to, and it took several games for Geek Culture to really understand how to play it. If you start without any strategy, like we did, the game mechanics works such that it’s easy to lose within the first few rounds. For new players, it is best to have at least one person familiar with the mechanics to guide the team along.

Given its childish premise, Dream Catchers might seem deceptively simple, but the options presented with each round present a massive challenge. As a team game, players not only to keep track of the board, the cards, the possible advantages but are also encouraged to discuss with one another and share their resources. where after just one or two rounds, you have to fight tooth and nail just to stay in the game.

The premise is a huge part of this game’s charm because the art is absolutely fantastic. Each card is lovingly designed in the same innocent, whimsical style. The dream and nightmare tiles convey the perfect balance of sweet innocence that can easily cross the line into unnerving, and evoke timeless nostalgia that players of all ages will be able to relate to. The game was illustrated by local artist, Sam Ping Ting.

However, the detail put into the artwork is a little lost, since the game itself doesn’t take advantage of the potential for creativity that the carefully designed dream tiles present. Since the game is played entirely using the symbols on the cards, the thought that was obviously put into the design is largely wasted.

There are cards depicting scenes ranging from a child faced by faceless monsters, or being surrounded by giant sushis, to sunbathing on a giant slice of pizza. With each card presenting such wildly different, original and imaginative artworks, it’s a shame that these aren’t brought into use within the game. 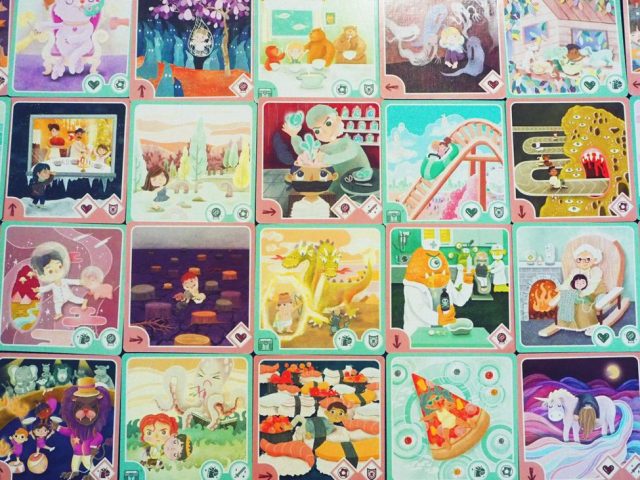 The game felt somewhat tedious at first, because of the length of each round, and the number of things that had to happen in the Night phase. The number of ways that one can lose makes the game end really quickly if no one is paying attention. The first few times, the game ended far quicker than 25-30 minutes, though with practice, each game got longer as we took more time to strategise, and were able to keep ourselves from losing too quickly.

And that’s just with one board that we played on. With 5 other boards to conquer, I’d say that this game has ample replay value.

All in all, this is a pretty solid game. But since there’s no indication of how to strategise in the instruction manual, it’s something you have to figure out on your own, so you should definitely be ready to get creative with your approach to the game.

Play Nation Studios just launched their Kickstarter campaign for international sales. Hit up their official Kickstarter page to support the release of this game.

Dream Catchers is a surprisingly challenging cooperation game with a fun and childlike theme. It’s easy on the eyes, perfect for those who enjoy a sense of nostalgia.

Family fun guaranteed for the holidays. 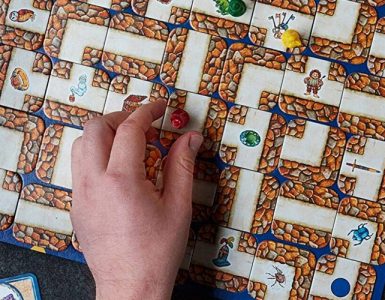