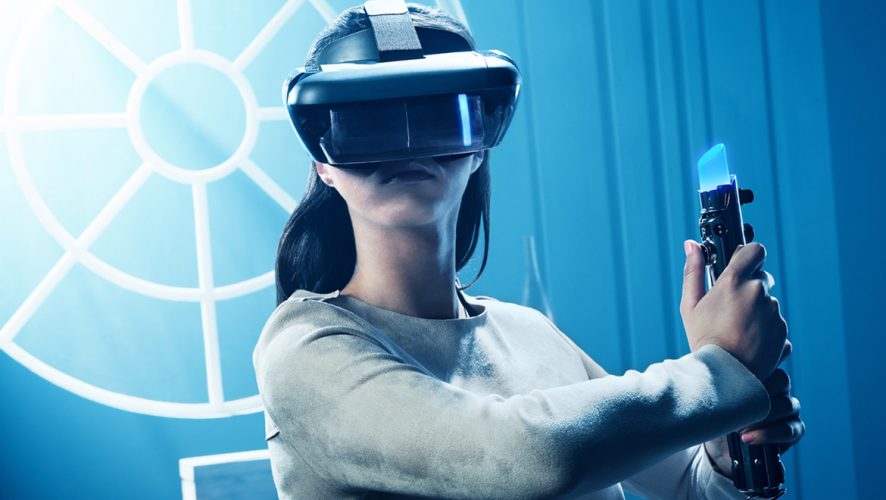 The Force is indeed strong with Lenovo. Those who attended Force Friday over the weekend in Singapore saw the Lenovo Mirage, the augmented reality (AR) headset that pits players against Sith Lords in lightsaber duels, engage in strategic combat or play a round of holochess.

However, it was merely on display and out of reach, locked up for folks to see but not touch.

But over in Berlin, Germany, Lenovo had actual demos at the annual consumer electronics event, IFA. The queue was long, but Geek Culture was invited to drop by Lenovo’s booth for an exclusive hands-on session, where we not only wore the headset, but also got to wield the lightsaber.

The demo was limited to the lightsaber duel, but that is already a dream come true for any Star Wars fan. After all, it’s not every day that you get to cross energy blades with a Sith Lord.

Except that my opponent was locked in with Kylo Ren. While I wished that it was against Darth Vader or even Darth Maul, that’s not the point.

For starters, the Lenovo headset is surprisingly comfortable to wear. It is also fast to strap on too, and I’m surprised that my glasses did not obstruct the headset nor feel uncomfortably squashed to my face. This is very much unlike virtual reality headsets, including the HTC Vive or Oculus, which has caused me so much discomfort, and at times even given me a raging headache. 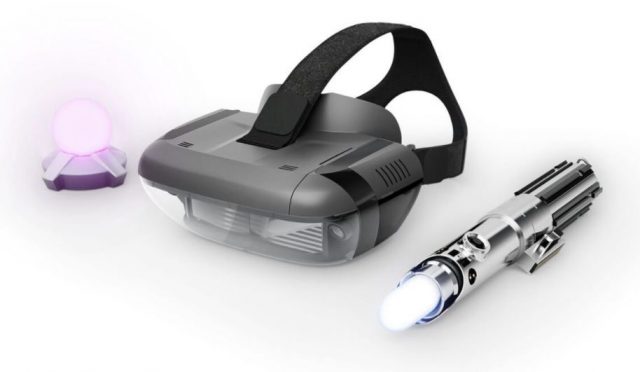 The headset is part of the experience, working in tandem with the lightsaber controller. The excitement at holding the hilt of a lightsaber in an actual Star Wars virtual reality simulation is just the beginning. The design of this lightsaber is very much like the Force FX replica, minus the “saber” part. Think of it as the PlayStation Move controller, complete with the blue glow at the tip, but with much MUCH better aesthetics. 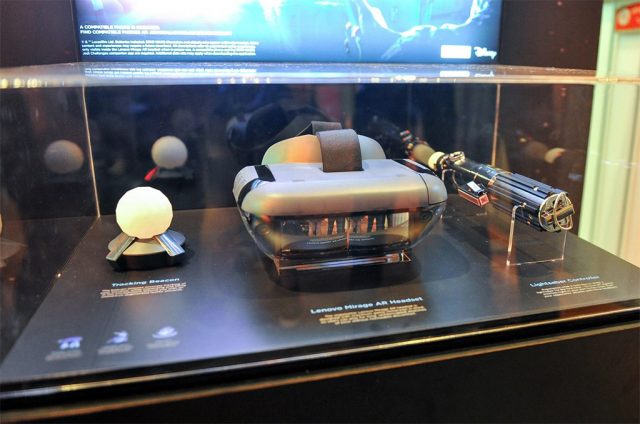 It’s light enough to handle with ease, but not too light such that you can’t feel the solid action of each swing. As I held it upright to calibrate the lightsaber, the MR experience kicked in, and I saw the lightsaber extended on the headset display, complete with the familiar sound effect that set my geek heart on fire.

Notice how I wasn’t wearing any headphones during the whole experience. The sound of clashing lightsabers came straight from the headset, sufficient to let you know blocks or attacks are connected. The difference between VR (virtual reality) and AR (augmented reality) is clear – without a pair of cumbersome headphones, the experience felt more natural and unrestricted. 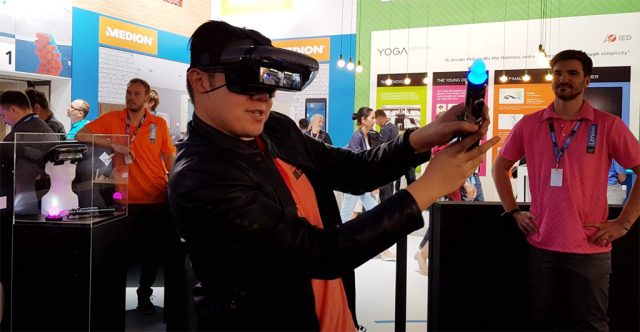 With the calibration complete, Kylo Ren appeared, ready to duel. He’s more of a hologram and that sort of adds to the feel of the augmented realism, akin to the Dejarik hologram chess game played on the Millennium Falcon.

The fight is quite straightforward – raise the lightsaber to the indicated positions marked by an orange lightsaber to deflect, and slash when a circle appears. Straightforward, however, doesn’t mean it’s easy. I had to either parry vertically, horizontally or diagonally. Swinging the lightsaber to slash Kylo while the circle indicator is up is satisfying, but again, that feeling would have been amplified if my opponent was his grandfather, Darth Vader.

While the duel’s premise is simple, the act of engaging a Sith Lord in a lightsaber duel is exhilarating. Kylo’s attacks start off slow but as the duel progresses, he comes in fast and furious. While I saw the rage mode coming once a red aura surrounded Kylo, it was still a challenge to block his attacks in succession. But once I got the hang of it and reacted quickly, it was a matter of time before Kylo was cut down.

Augmented reality is more realistic than virtual reality, in the sense that you can still see the real world. That means I didn’t have to worry about swinging and hitting someone by accident as the hologram was overlaid with reality. This, in part, helps to alleviate the giddiness commonly associated with virtual reality as you don’t feel disconnected with the real world.

The actual space required to play Jedi Challenges is also smaller than expected. Throughout the experience, I didn’t take more than three steps away from my original spot. The tracking beacon, placed on the floor, got a good fix on my lightsaber swings, so my blocks and attacks connected accurately.

The duel was short but in those few minutes, I felt slightly breathless. It could have been the excitement or a sign that I need to work out. But that also means the experience gives you a slight cardio workout, mostly from the swinging action. This is similar to how some gyms utilise lightsaber dueling to get the heart pumping.

Overall, the lightsaber duel in Jedi Challenges is definitely worth the investment in the Lenovo Mirage. While Lenovo had no confirmation on whether this will extend into a multiplayer scenario, the possibility is there. And since the experience is driven by a smartphone inserted into the headset, and an app that could potentially be updated with more challenges, it’s highly likely that more opponents and battle scenarios will be added to Jedi Challenges.

So if you’re up for it, you have two months to save up before the Lenovo Mirage arrives in November for US$199 (S$379).

For a taste of what each of the various modes are like, have a look at the following videos:

What do you think the Ray-Ban Stories will be able to do?