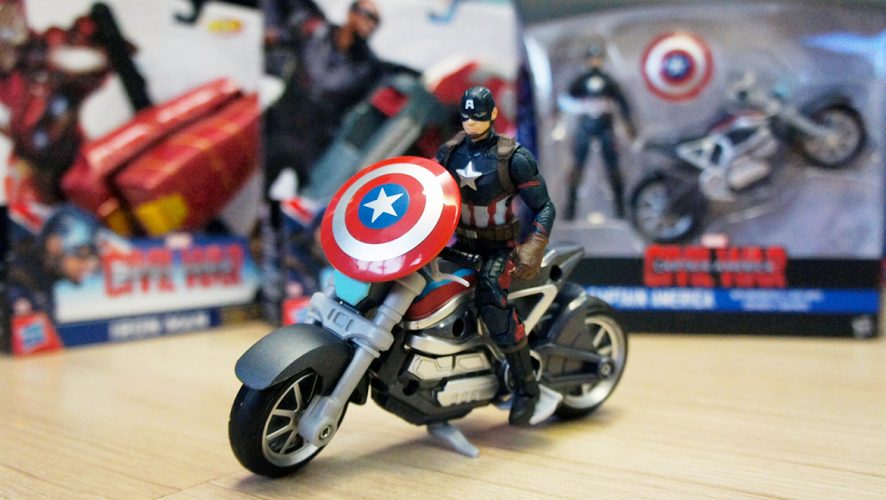 *Iron Man Stark Strike or Falcon Redwing Flyer will be at random, on a first-come-first-served basis during prize collection.]

Captain America: Civil War (read our review here) will hit cinemas on April 28th, and to celebrate the impending clash of heroic titans, where #TeamCap faces #TeamIronMan, here are a list of geek treasures you might want to get your hands on, before and after catching the film!

While you’re at it, don’t forget to scroll all the way to the bottom if you want to stand a chance to win some Captain America: Civil War toys courtesy of Hasbro Singapore! 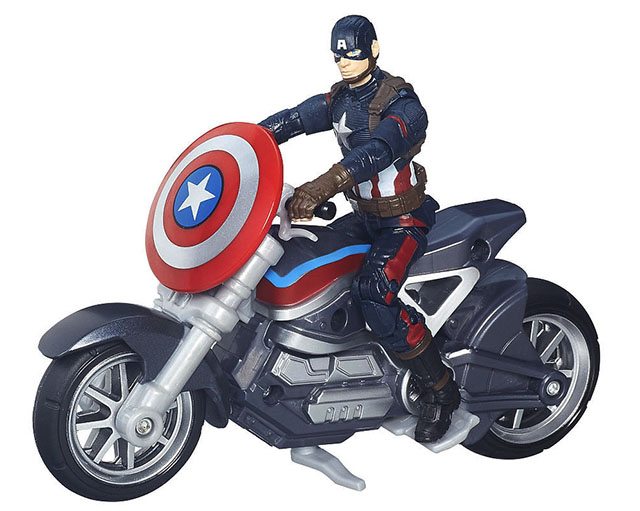 Featuring a movie-inspired design, and standing at 3.75 inches tall, Captain Steve Rogers is highly articulated and a detailed action figure. Armed with his mighty shield and trusty motorcycle, it’s all ready for revved up fun out of the pack. Collect the rest of the Marvel Legends series figures, and re-enact your favourite scenes straight from the movies! 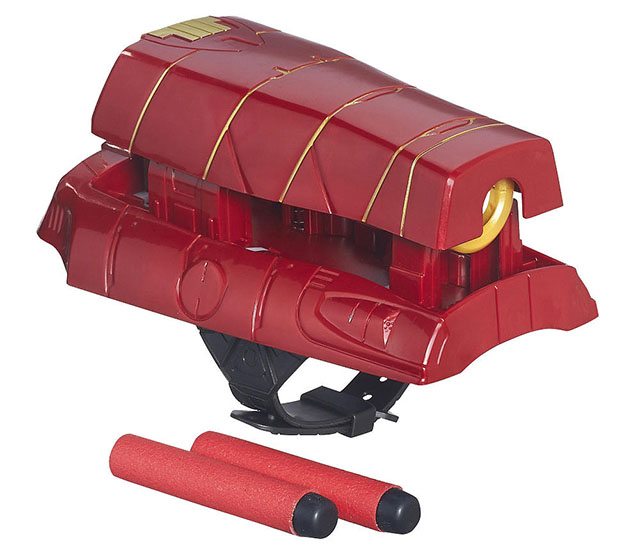 Fans of Iron Man would definitely not want to miss this Stark Strike gauntlet from Hasbro and Nerf. Featuring a hidden pop-up launcher to take your enemies by surprise, the design is movie-inspired, and allows both kids and adults alike to partake in the action. One button reveals your launcher, while a second one fires away. Take your place on Team Iron Man today, with the Stark Strike gauntlet!

An exclusive offering from local retailer Action City in conjunction with Marvel’s upcoming Captain America: Civil War Festival Special, the set gets you the super adorable Cosbaby bobble-head of Captain America, as well as a Civil War T-shirt, and one STGCC (Singapore Toy, Game & Comic Convention) 1-day Admission Ticket happening from 10-11 September. Hot Toys are known for their immaculate attention to detail, and this Cosbaby is no exception, make this a centerpiece of your collection today!

Available now at S$68.00/set (Only on Action City Mobile App)

Hot Toys action figures are the pinnacle of toy figurines, and their often hefty price tags are justified by the quality of their pieces. First on our list is Prince T’Challa himself, Black Panther! Standing 31cm tall, the Wakandan Prince comes alive with over 30 points of articulation, a newly developed helmeted head with detailed textures and silver trims, along with six pieces of interchangeable gloved hands for your customizing pleasure. The Black Panther suit is the highlight though, with extremely fine details and trimming, bundled with a figure stand with a nameplate that bears the movie’s logo. 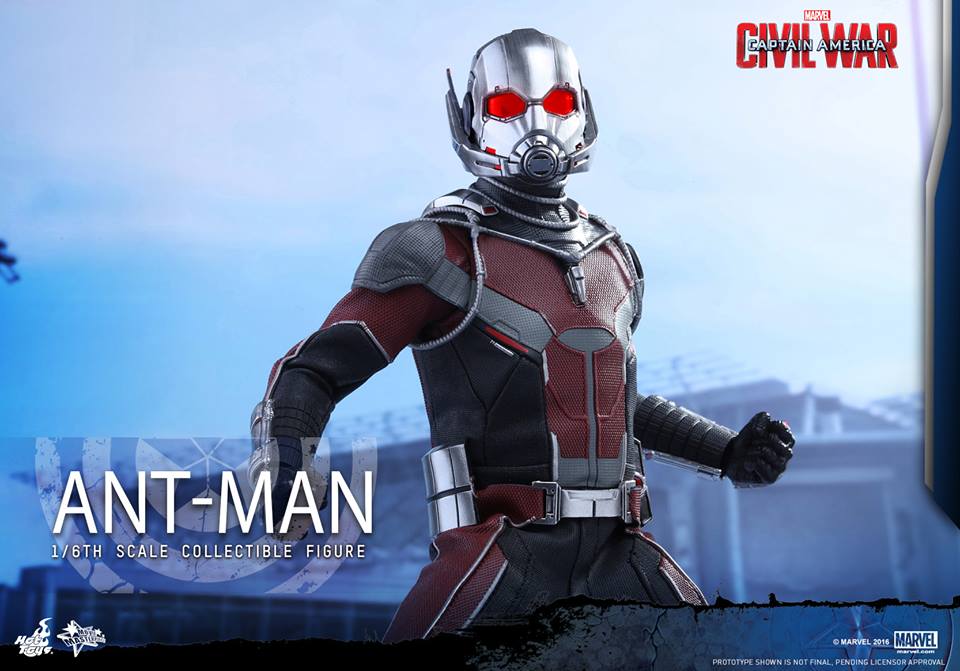 Paul Rudd was a riot in the Ant-Man movie, and his Hot Toys counterpart is no less amazing. An authentic head-sculpt with Rudd’s likeness is present, along with an Ant-Man helmet with LED lights. Once again, Hot Toys is providing six interchangeable gloved hands along with their beautifully realised Ant-Man suit, gauntlets and boots. The best part is the miniature Ant-Man, a tiny 2.8cm tall figure to go alongside the 30cm figure, for fans to live out their Ant-Man fantasies. The figure also comes with the Civil War stand and movie nameplate.

The Falcon comes swooping in for the next entry in our list, featuring Anthony Mackie in his updated Falcon suit with detachable wings. This Hot Toys figure comes with all the standard bells and whistles, but Sam Wilson also packs submachine guns, his Redwing drone on his flight backpack, removable goggles and a dynamic figure stand ideal for flight poses. Flying has never been more fun than with The Falcon and Team Captain America!

Hawkeye is next, and I appreciate all the attention paid not only to Clint Barton’s look and costume, but his bow as well. With a quiver of 16 individual arrows, including one with an interchangeable arrowhead that features a miniature Ant-Man sitting on top, comic geeks will definitely relish reliving this moment from the upcoming movie. Hawkeye also comes with a his pistol, a dagger with a special dagger sheath in his boot, and his cool googles. Hot Toys definitely hit the target with this one!

Captain America’s best buddy and reformed Hydra agent, Winter Soldier, is the eighth entry on our list. With his chrome coloured left arm with a red star emblem, to his sculpted hair and movie-accurate facial likeness, complete with wrinkles, skin and stubble texture, this particular figure is my personal favourite. Bucky Barnes also has what looks to be the machine gun that shoots down War Machine in the trailer. The Winter Soldier is just so badass, no matter how you look at him and it’s about time Bucky and Steve Rogers are back together.

Speaking of Captain America, Steve Rogers now has a new developed body, including both helmeted (with two interchangeable lower faces) and unhelmeted head sculpts. Along with a completely new suit, Hot Toys has included his trusty shield, and a broken Crossbones helmet. Not only is the likeness immaculate, I loved Captain America’s new suit, with the star emblem bearing red and white patterns. The broken Crossbones helmet just gets me excited about when they face off in the movie. An angry Captain America never looked this good!

Captain America and Bucky aren’t the only awesome twosome, War Machine and Iron Man are not to be messed with either. The War Machine Mark III is as high tech as you would expect it to be, with the helmet, chest piece and repulsors bearing LED light-up functions. The armour, in metallic black and silver, also has great decals and weathering effects. War Machine’s back mounted machine gun can be easily primed for action, and his new baton can be lighted up as well. Take out the competition the War Machine way, in the near future! 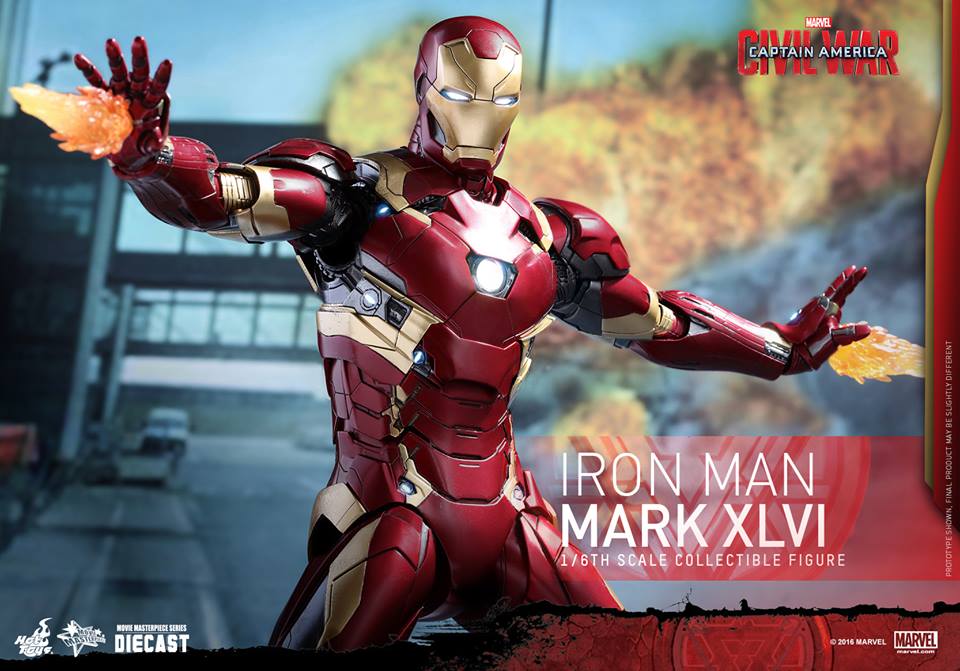 Tony Stark, oh Tony Stark, what would the Marvel Cinematic Universe be without you? The Iron Man Mark XLVI figure debuts as part of the Power Pose Series, and features 28 LED light-up points throughout the armour, in addition to the repulsors. The added transparent pole on the figure stand allows for great poses of this remarkable Iron Man suit. The detailed and smooth colour work is awesome on this piece, and complements the sleek and streamlined Mark XLVI armour design. Join Team Iron Man and live on the cutting edge of technology!

Funko Pops are all the rage nowadays, and the Civil War lineup certainly features some of the nicest exclusives ever. While the usual suspects like Iron Man and Captain America are taking center stage, the exclusive and certainly rare Battle Damage Crossbones, Unmasked Black Panther and the flying Falcon Pops are definite highlights for me. Action pose Captain America and Unmasked Iron Man are also must-grabs. Try to amass the whole collection if you can! 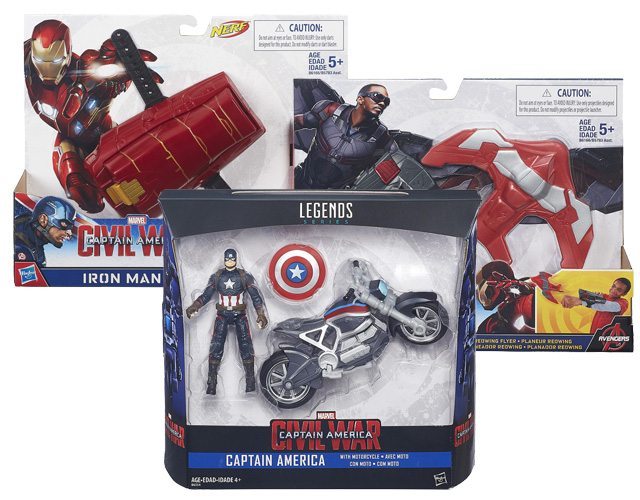 Here are the details of the prizes up for grabs, courtesy of Hasbro Singapore:

*Iron Man Stark Strike or Falcon Redwing Flyer will be at random, on a first-come-first-served basis during prize collection.

Here’s How to WIN

All you have to do is to follow these simple steps:

The contest is open to all who are currently residing in Singapore and closes on 1 May 2016 @ 23:59hrs. Winners will be announced right here by  3 May 2016 and contacted via email.