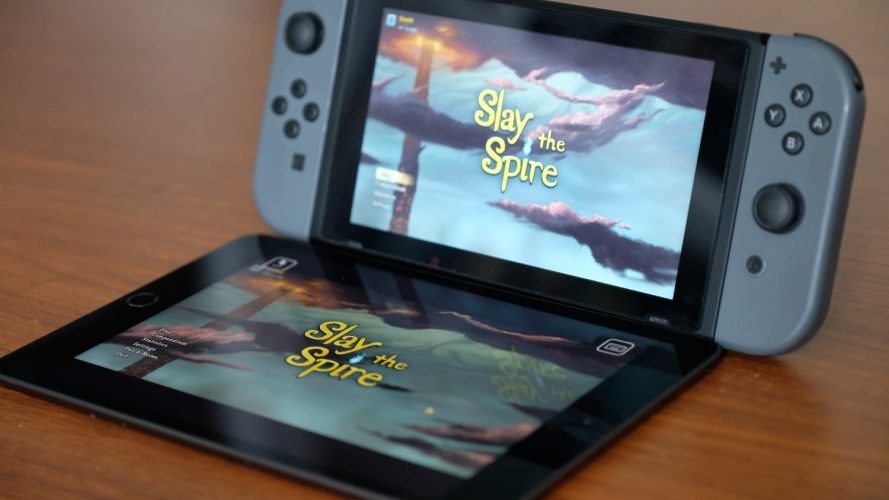 Confession time: Having clocked close to 300 hours in Slay The Spire on the PC, it would be utter madness to play it all over again on the Switch.

But here I am, doing it all over again.

Before one passes judgment, if you’ve not heard of Slay the Spire, it’s by far one of the best roguelike deck builders right now. The basic premise is to climb a tower, encounter enemies, gain new powers, and slay bosses. A run would typically take between an hour for one that is successful to 30 minutes for failure. Regardless, you’d often go for multiple rounds in a session.

For the most part, the general experience from the PC version of Slay the Spire has been translated to the Switch. The game still remains as one of the most entertaining and challenging indie game experiences in recent times. I’d recommend it to anyone who loves messing around with probability with a good touch of randomness.

Slay the Spire works amazingly well on an iPad mini via Steam Connect. It works great on Android phones as well. However, in doing so, would require me to have my desktop turned on and a solid internet connection as the game streams over the Internet to my device. Control wise, it could be better especially for touch controls but otherwise, it’s largely functional.

Considering the game can be played without an internet connection, the Switch version will naturally be a boon when commuting or whilst on a plane compared to Steam Connect.

If you haven’t gotten it on PC yet, you might be a little torn considering the price hike due to the so-called “Switch Tax”. However, one should not be too hasty to dismiss it purely on price alone. Slay the Spire is still a great game and port, regardless of platform. Opting for it on the Switch might just be the right choice if you’re on the move often.

The Switch could easily chug out 5 hours of continuous gameplay. This could be attributed to the Low requirements by the game and after a few sessions, the controls will feel like second nature.

Translating Slay the Spire from PC to Switch seems to have been rather effortless for the developers, Mega Crit. Depending on how you wish to play, touch controls work exactly like the PC version and the button controls work flawlessly as well in terms of layout. Eventually, I’d imagine that most players would gravitate towards button controls as it feels more natural in hand as opposed to touch controls. However, at times, one might find themselves juggling between the two.

Optimization wise is where Slay the Spire suffers a small bit when compared to PC. Despite turning on fast mode, there are points in the game where the slowdown is apparent and motion does not seem as fluid. Being impatient, there are moments where you might deploy cards too soon or activate them on the wrong monsters. Such unforced errors can be common and taking a more cautious approach can slow down gameplay a fair bit. This is actually where the more precise touch controls come into play. While most won’t use it for the entirety of the game, it comes in handy during critical junctures.

The small screen of the Switch is both boon and bane for Slay the Spire. On one hand, it makes the game portable and on the other, it makes tooltips hard to read at times. There can be quite a bit of information highlighted by the game and thus presentation is important for clarity. For veteran players, the card upgrade tooltip is not apparent from the start and one might end up picking the wrong card by mistake if you’re not careful.

Being able to run without an Internet connection and its portability are the biggest pluses when it comes to Slay the Spire on the Switch. However, the lack of mod support on the Switch can cause the game to lose a bit of shine when it comes to quality of life issues. The core game in itself is already solid and if you’re getting the game for the first time, you won’t miss much.

Overall, Slay the Spire remains a quality recommendation despite the small technical issues. Now that it’s available on the Switch, I’m hoping the game will further develop the cult following it enjoys on the PC.