How The PS5 Is Striving For Gaming Excellence With New, Enhanced Technology

The family line of Sony’s PlayStation consoles has always been tied to numbers. Since the early days of the PlayStation 1, subsequent iterations have seen consistent naming, going by the sheer count of 2, 3, and 4, so it’s only expected that the newest member would be officially unveiled as the PlayStation 5 (PS5).

Scheduled for launch by the end of 2020, the console will come equipped with a host of new and improved technology, including ray-tracing support and backward compatibility. It’s beyond a software-level fix, too – Mark Cerny, the brains behind much of PS4’s build design, allayed fears with a confirmation that the PS5 would indeed have “ray-tracing acceleration in the GPU hardware”.

What this essentially translates to is that owners can look forward to complex, realistic lighting and sound effects in the 3D environment of game titles. That’s the least of the console’s capabilities, however. In addition to the graphical and performance boost, its solid-state drive (SSD) will also sport astonishing load speeds and increased efficiency. This is how the technology works: By having the SSD do away with the need for data duplication, its raw read speed ends up being dramatically faster than the traditional hardware, and helps to save crucial space as well.

And where physical games will use 100GB optical disks that can be inserted into an optical-drive-slash-4K-Bluray-player, game installation on the PS5 is set to be different from its predecessor. Cerny explained to Wired how the team has shifted its storage methods to make it a more configurable installation, stating, “Rather than treating games like a big block of data, we’re allowing finer-grained access to the data.”

READ ALSO:  Overcooked: All You Can Eat To Launch On More Platforms, With Extended Crossplay

Strip away the jargon, and it’s easy to see where the appeal lies. Unlike the mandatory process to download all content on the current PS4, the PS5 gives players the option to install part of a game – say, for instance, only the multiplayer campaign – while leaving rest (i.e. single-player campaign) for another day. Alternatively, it’s also possible to install the whole thing, then delete the respective game mode upon completion. Voila.

The multiplayer experience is set to usher in some welcoming changes, too. Building upon the PS4’s user interface, the upcoming console will show users more useful, detailed in-game specifics on the home screen, such as the multiplayer matches that are available, or the type of rewards.

“Even though it will be fairly fast to boot games, we don’t want the player to have to boot the game, see what’s up, boot the game, see what’s up,” Cerny explains. “Multiplayer game servers will provide information like what missions you could do and what rewards you might receive for completing them – and all of those choices will be visible in the UI. As a player, you just jump right into whatever you like.”

But perhaps the most impressive show of technology is in the PS5’s “adaptive triggers” and haptic feedback features that play on the tactile experience. The former is capable of switching between varying resistance and tension levels to make archery or shooting with different firearms a more authentic affair. Meanwhile, the latter comes attached with highly-programmable voice-coil actuators in the left and right controller grips that offer enhanced audio as well.

The haptics, it seems, are capable of evoking some exceptional effects. In Wired’s exclusive hands-on session with the PS5, the experience proved to be distinct and immersive, offering sensations tailored to the actions and environments of the game world. According to the article, sand felt “slow and sloggy”, while mud felt “slow and soggy“. Water came with a sense of resistance, and ice surfaces were slick. Layered, dimensional gameplay is the name of the game here.

Other improvements for the new console include a USB Type-C port and a larger-capacity battery. The controller will also be heavier than its DualShock 4 counterpart, but product manager Toshi Aoki confirms that it will still be lighter than the current Xbox controller.

With all these new features to its kit, the PS5 is certainly shaping up to be an extremely attractive picture. It’d certainly be interesting to see how game studios are planning to use them to their advantage, especially since some have already rolled out their devkits. Still, word of upcoming projects for the new console remains on the hush-hush, although Bluepoint Games – the team behind the PS4 remake of Shadow of Colossus – appears to have something big in store.

“We’re working on a big one right now,” president Marco Thrush shares, “I’ll let you figure out the rest.” 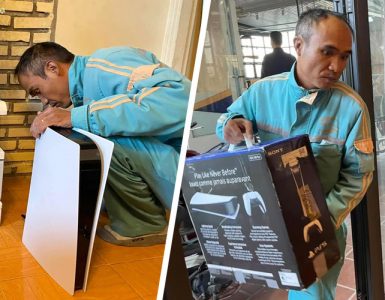 Our favourite ninja is here!