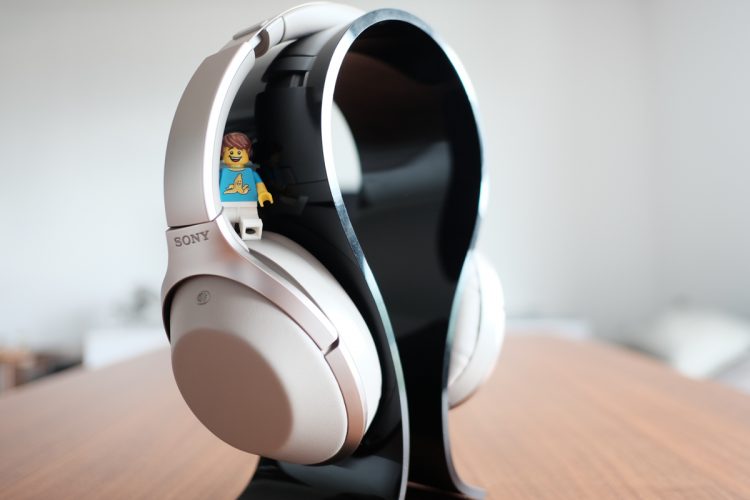 If Sony’s MDR-1000X Noise-Cancelling Bluetooth Headphones didn’t come with such an awkward sounding naming convention, I’d love to christen this pair of headphones with the label “Whoa”.

I’ve reviewed plenty of products on Geek Culture, and rarely has a new toy invoked such a consistent positive reaction amongst the people who have tried out the headphones. Sony has certainly made an impressive pair of noise cancelling headphones that is worth a spot on your shopping list this holiday season. It covers all the criteria one would expect in a pair of high-end noise cancelling headphones – comfort, solid audio, peerless sound cancellation, and a solid battery life that keeps on ticking. Having recently reviewed the Sony MDR-100ABN h.ear on Wireless NC headphones, I expected similar performance and features, as how different can a pair of headphones by the same company really be? Boy, was I wrong.

At first glance, the Sony MDR-1000X Noise-Cancelling Bluetooth Headphones resembles the MDR-100ABN but for the different colors used. To be fair, all the features that I loved in the MDR-100ABN are here. That said, the MDR-1000X has super comfortable ear pads that provides the first level of defence against all exterior sound. Even with my glasses on, the pads wrapped nicely around the frames of my specs, and still managed to create a comfortable seal for the noise cancelling magic to work. 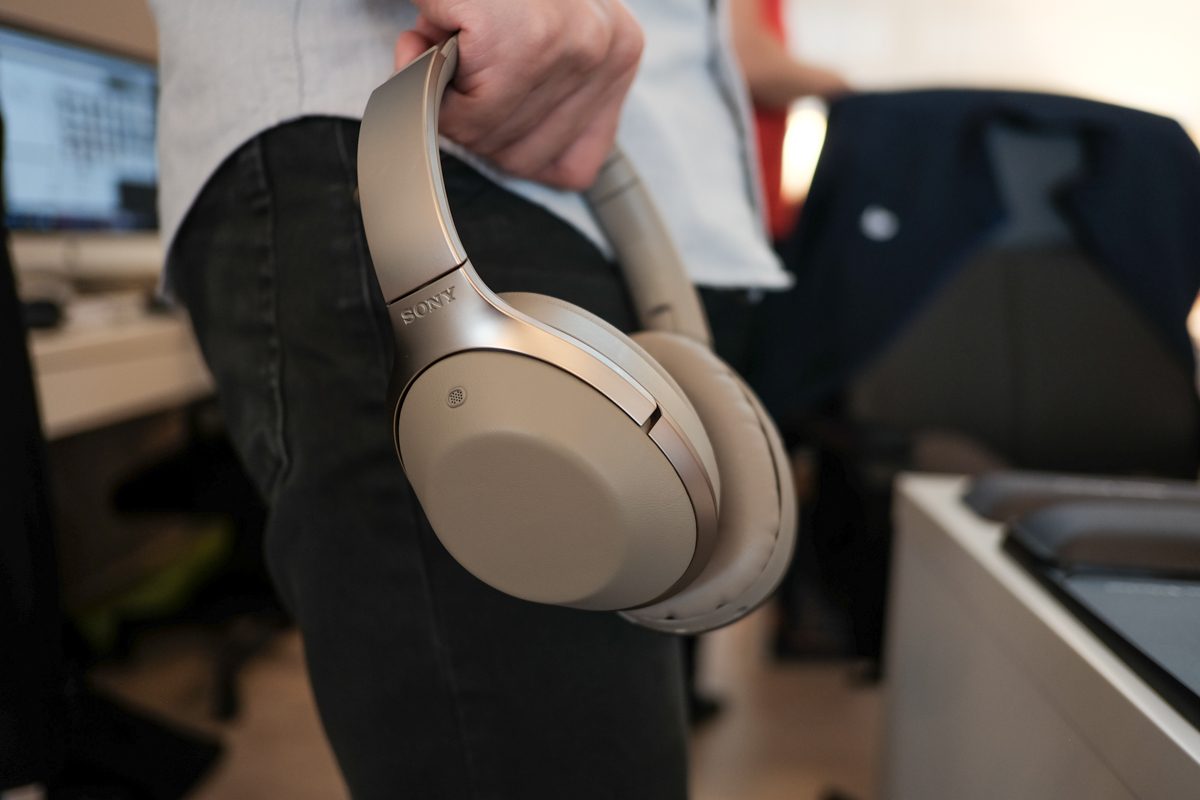 The materials used for the MDR-1000X feels classy and projects a far more professional look. The only buttons on the headphones are the power button, along with two other noise cancelling toggles. You might expect to find physical controls for your music, but they aren’t here. Instead, Sony is using touch sensors located on the right side of the headphones, much like those on the Sennheiser PXC 550 Wireless.

Touch controls are sound great in theory, but they can be tricky to operate in real world scenarios. For the most part, I’ve found that the controls on the MDR-1000X are responsive, but require rather precise inputs to get them working consistently.

A quick double tap on the sensor will get your music to start or pause and even answer incoming calls. The tricky part of the touch controls come into play when you’re controlling the audio toggles as seen above.

Scrolling up or down on headphones with your finger will increase and decrease the volume respectively. In this regard, the touch controls on the PXC 550 Wireless are more precise.

Going left to right or right to left will allow you to skip or return to tracks. It’s awesome when it works and mildly frustrating when it doesn’t. I found that it really helps to delay and hold your finger for a second or two, before actually moving your finger, to allow the sensor to really work well. 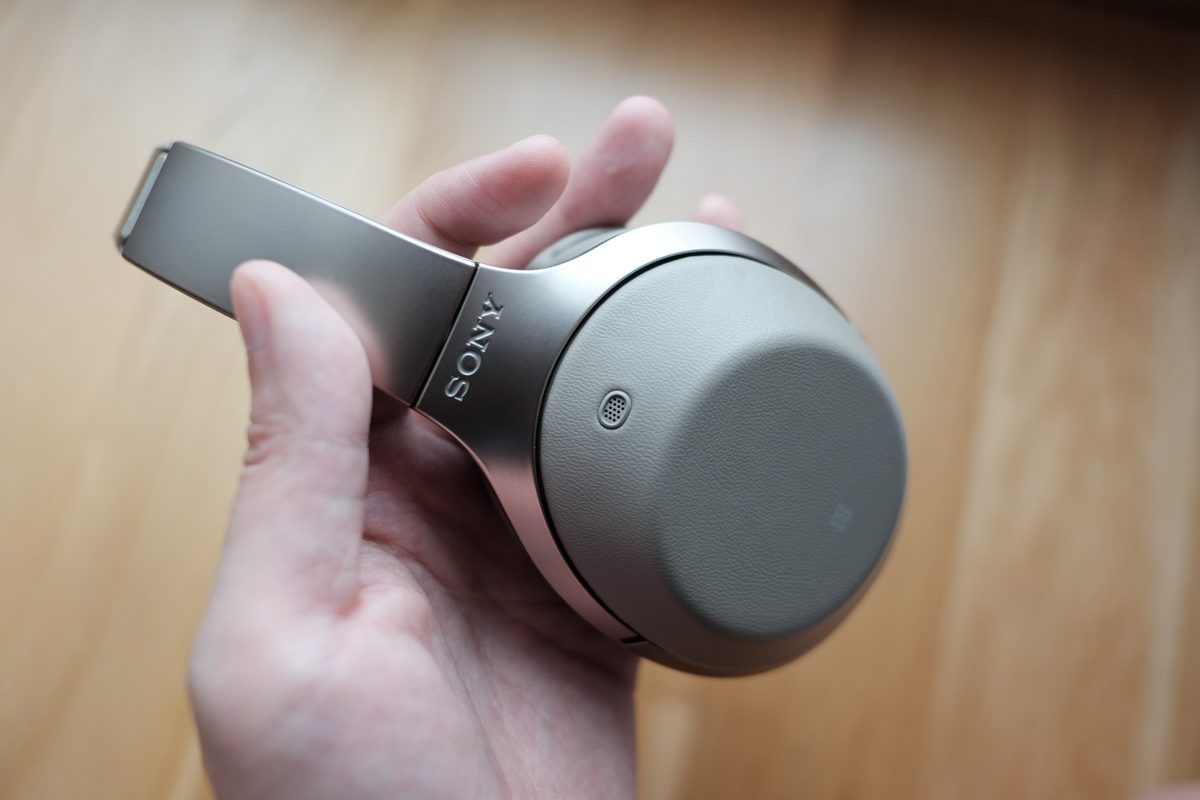 When you’re using noise cancelling headphones, hearing someone talking to you can be a bothersome affair. Usually, you will need to peel off your headphones to hold a conversation. However, that’s where the real magic of the touch controls come into play.

Simply place your entire palm over the right cup of the headphones, and you’ll instantly turn off the noise cancelling feature. Removing your hand turns it back on. The only drawback I found was that the audio that’s picked up while using this feature seems to be directed towards the back of your head. This makes it odd especially when most conversations take place with someone directly in front of you. 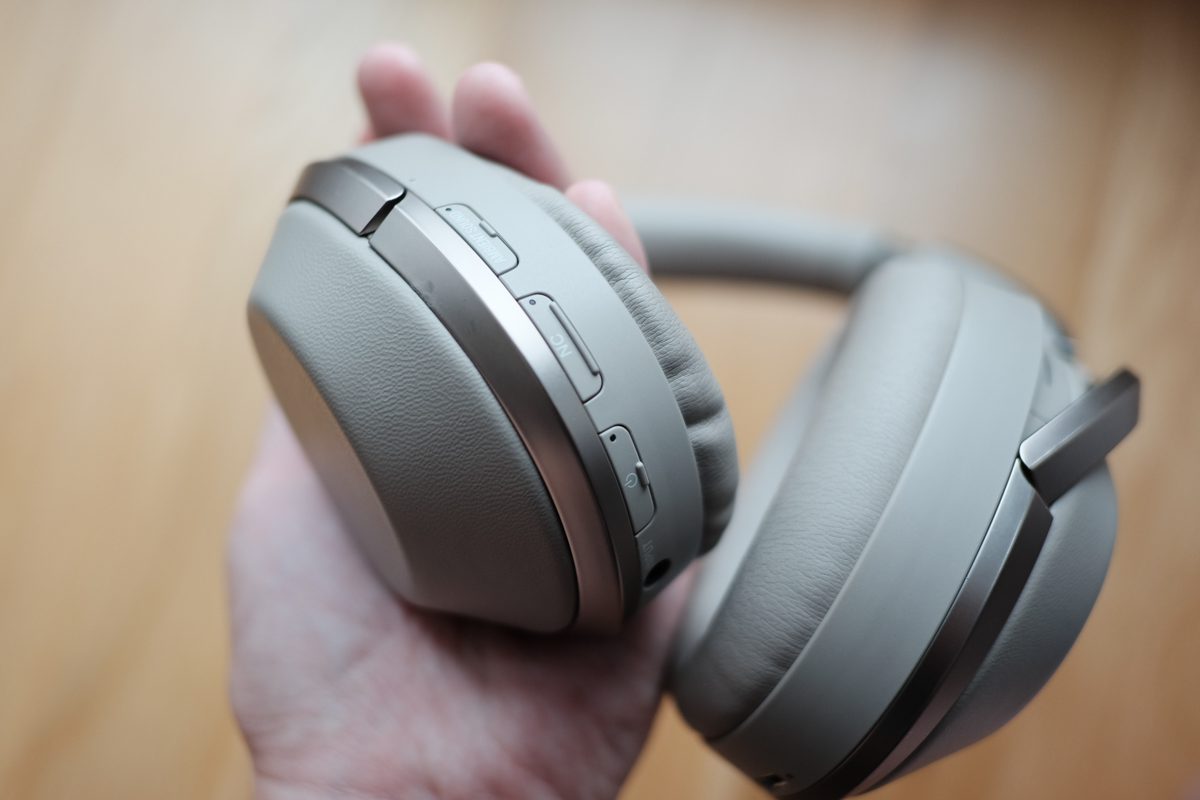 The magic of the noise cancelling originates from the microphones located on the top of the headphones itself, and they look to be doing a way better job compared to the MDR-100ABN. The world goes entirely silent once these headphones are placed on your head, leaving you to enjoy solitude with the piped music.

Save for the occasional ambient life-saving noise of traffic sounds, the MDR-1000X is certainly the top of its class when it comes to noise cancellation, and on par with the PXC 550. Additionally, there are other toggles for voice and ambient sound to allow other sound types through the headphones, but you’d find most of your time in full-on noise cancelling mode. 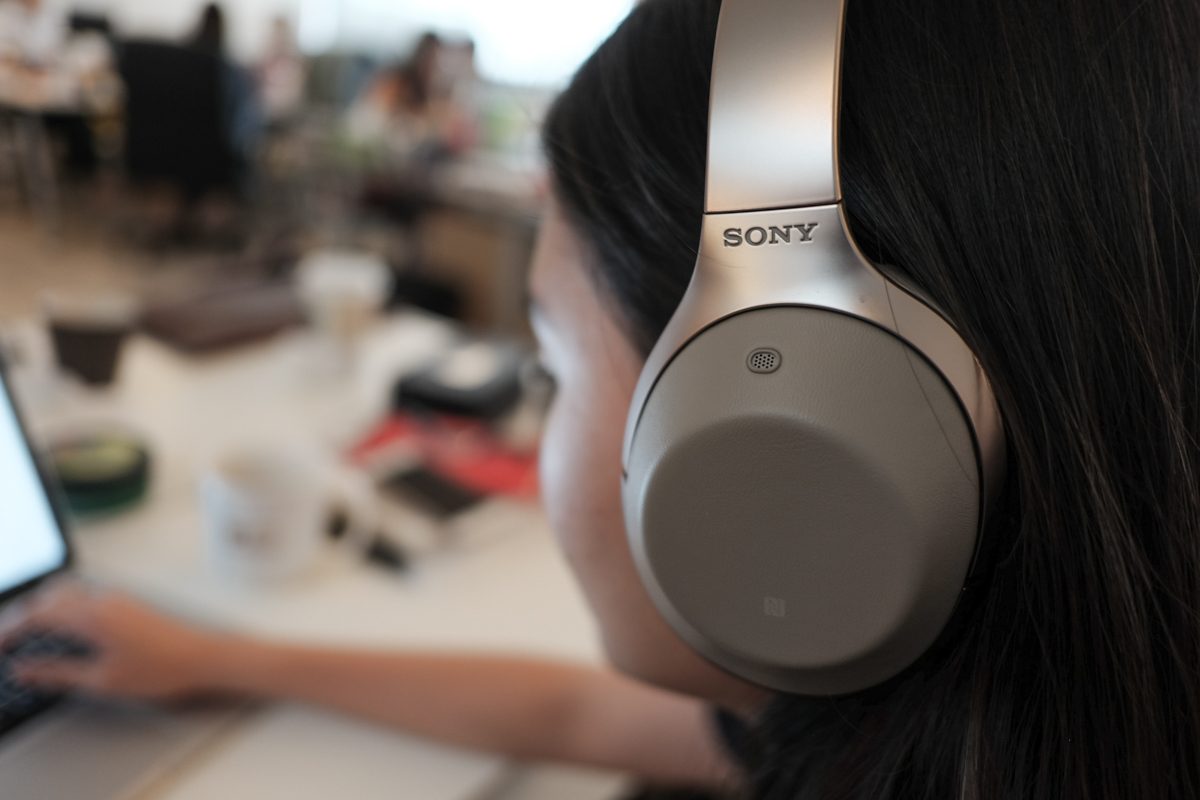 Even with all the frills that the MDR-1000X headphones comes with, the focus should be on the audio quality and for that, it as crisp as the MDR-100ABN. Armed with the same 40mm drivers, you will be getting the same consistent listening quality that one has come to expect with Sony audio products. I put the headphones through the same audio tracks as my last review, and got same excellent results. Once again, if you’re looking for quality audio on the go, you can’t go wrong with this pair of headphones. 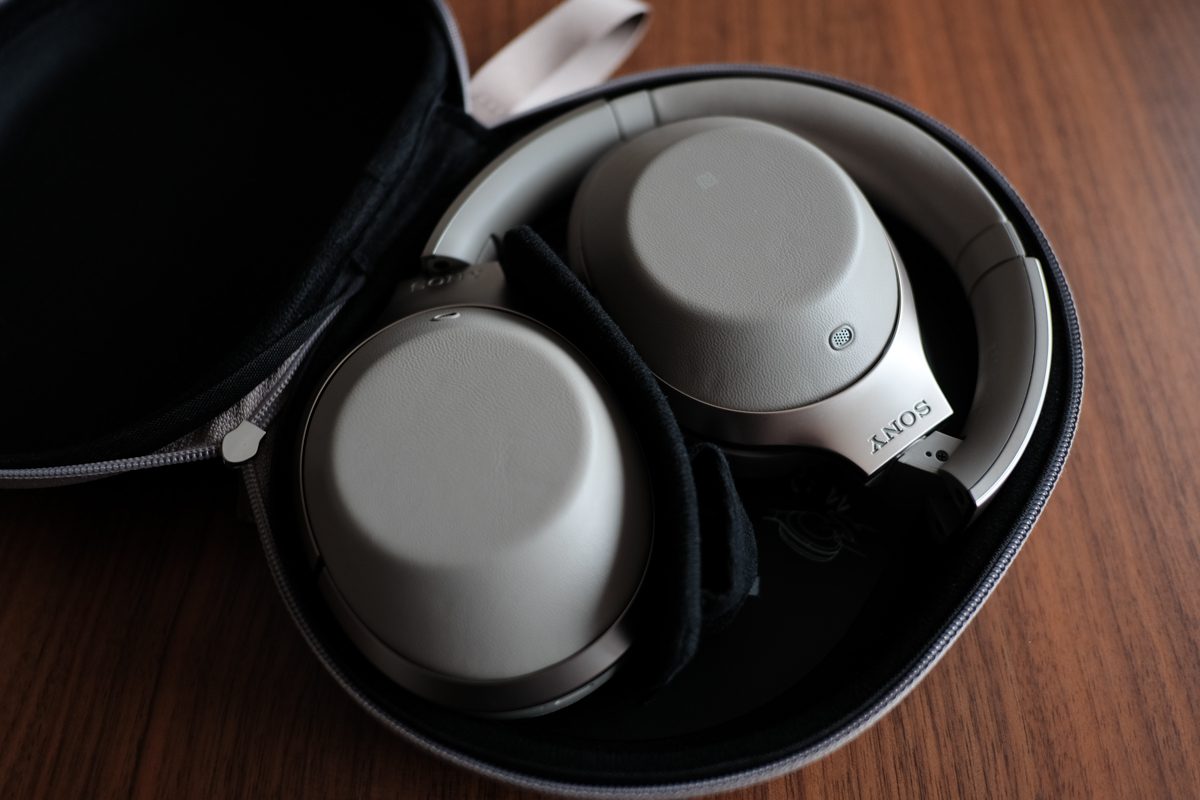 Built with portability in mind, the MDR-1000X is able to reduce its form to a relatively flat silhouette which is a big plus. If you’re worried about the headphones getting dinged, the supplied carrying case provide ample protection on the level of an overprotective mother, though it will take up quite a lot of space in your bag.

The Sony MDR-1000X Noise-Cancelling Bluetooth Headphones is one of the best pair of headphones that I’ve tried yet. If you’re the type that would make full use of its features, the investment of S$599 will possibly be the best money you’ve spent for both form and function. It’s also cheaper than the S$649 Sennheiser PXC 550.

Being cheap AF, rarely would I recommend a device that is priced more than a PlayStation 4 but the MDR-1000X is certainly worthy. If you’re in the market for a new set of headphones, you will want to give these guys a shot. Be warned – you’re probably gonna buy them after the first audition.