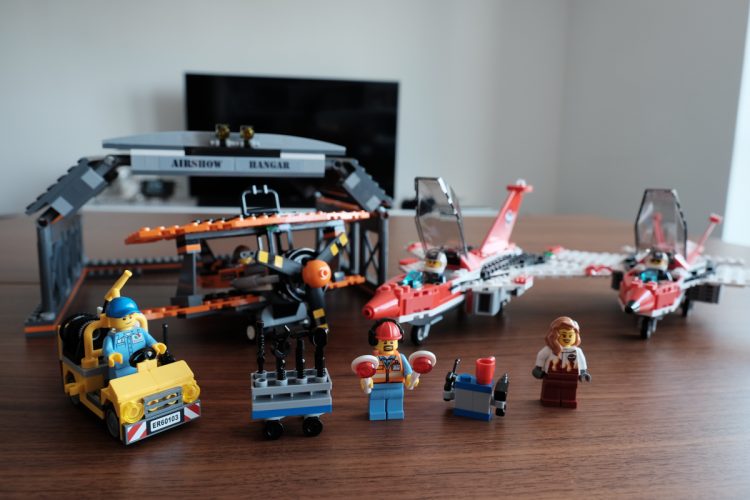 As I struggled on the bus to bring home LEGO’s Airport Air Show 60103, I knew it was going to be an awesome experience within. Considering the number of eyes staring at me as I grasped at the box awkwardly while trying my best to maintain balance on the bus they just might be jealous of my haul.

With a huge box comes plenty of bags contained within! There’s EIGHT numbered bags here with FIVE instruction booklets and an additional bag of parts that hold the larger plates.

Parents if you’re looking for good value when it comes to rewarding your kid, this set might be the best bet.

Think about it, with three planes to be built, a ground control car and a hangar to set the scene, you’d be looking at bite sized self entertaining sessions over multiple playtimes. Value? Hell yeah!

Like all the air shows that I’ve been as a kid, there’s nothing more thrilling at watching and hearing a fighter jet roar through the sky. Decked out in primarily red, the first fighter jet looks awesome. Based on the design, I’d say it is loosely inspired by the Saab Gripen. With the vents at the side, this plane looks like it would influence any kid who harbours aspirations to be a fighter pilot when he or she grows up.

Not to be left in the wake LEGO does not cop out here by cloning two planes of the same design in one box. This FA-18 inspired plane retains the same colours of the other jet while changing up the silhouette. It’s a twin engine fighter jet with different vents at the front that’s made for speed (in my mind).

These two planes look absolutely awesome with the use of colours with minimal sticker placements as well. I had a great time putting these two planes together and I’m certain any kid would as well.

The real hero of the set has to be awarded to the bi-plane. Coming in outstanding orange, this plane screams for attention from afar. It’s hard to not be attracted to this beauty.

As much as stickers are a bane to many a LEGO fan, the stickers on this propellor plane really makes it even more outstanding. We’ve got stickers on the propellor to give it additional accents/ Branding and vents are stickers as well and they give the plane so much more character that it doesn’t look too gaudy.

This is by far my favourite plane in the set as it gives plenty of playability and room for imagination. Why just fly a plane when you can do stunts in the air.

Rounding up the set in terms of vehicles would be the ground crew and their control car. Small and quaint, these guys serve as the appetizer to the set by being the first two bags that one would start with in numerical order. Gotta give props to the guys behind the scenes else no planes would be in the sky.

Lastly, the biggest pieces in terms of size for the set goes to the hangar. It’s a hangar and you can store planes in it. Sadly, there’s only room for one plane and I’d say it goes best with the bi-plane simply because of the colours.

The Airport Air Show 60103 is full of fun and its price of S$149.90 gives plenty of value! LEGO has been incredibly generous by packing in six minfigures along with the entire set to ensure that every vehicle is adequately staffed. Given the number of bags to work through, it would take a fair amount of time work complete the set in one sitting. While the planes in this set might be fast, building them is best taken at a leisurely pace.