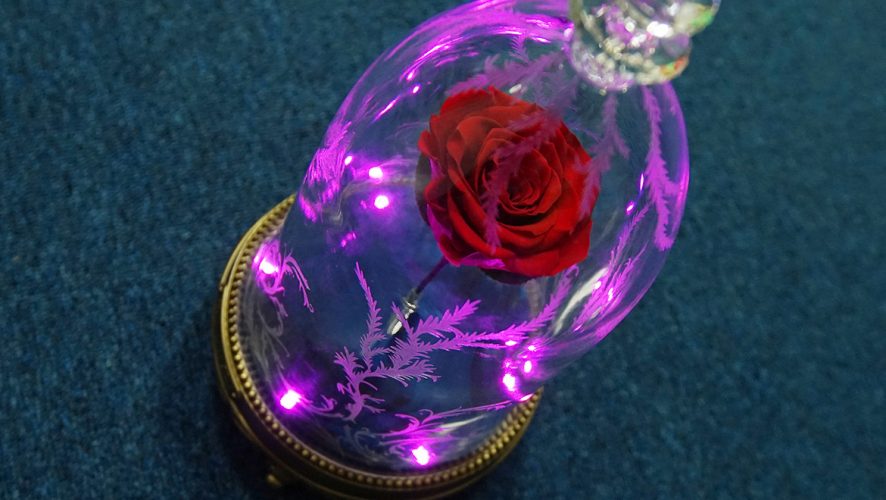 When it comes to movie merchandising, not all films make for good toys. Avatar was Hollywood’s biggest earner at the box office, but the toys from the movie weren’t too hot. Unless you happen to be like the Transformers franchise, which was birthed from a series of toys, toys from movies do not perform as well, unless it’s from the Star Wars franchise. Just look at toys for Star Trek, The Fast and Furious, or even James Bond.

One thing that has taken off though, are high-end replicas. I loathe to call them toys, though some of them are, but hardcore fans don’t mind picking up a replica DeLorean, K.I.T.T. or an Ecto-1, or replica 1:1 scale swords from Highlander, G.I. Joe and Lord of the Rings. Even Hasbro has gotten into the act, with 1:1 scale Captain America’s shield and Iron Man’s helmet, and soon, Mjolnir and StarLord’s mask. And who can forget this amazing levitating Death Star Bluetooth speaker from Star Wars? 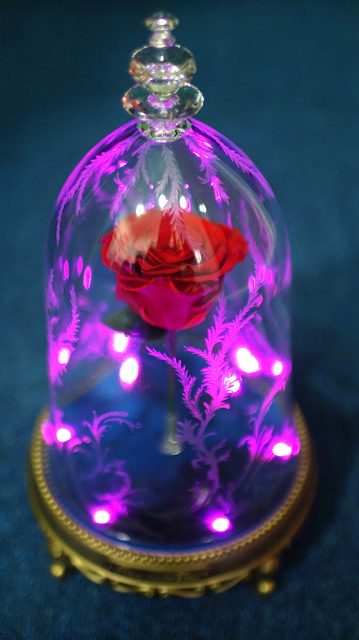 Then you have Disney, which recently launched this baby – a replica of the enchanted rose from Beauty and the Beast (read our movie review here). It doesn’t matter that the packaging says that this is for the 2017 live-action film, as the look and feel of this can easily apply to the 1991 Academy Award nominated film as well.

If you have seen the animated movie, you know that the dying rose signifies the love between Belle and the Beast. Covered by a transparent bell jar, the floating shimmering rose represented the limited time remaining until the reunion of the lovers. 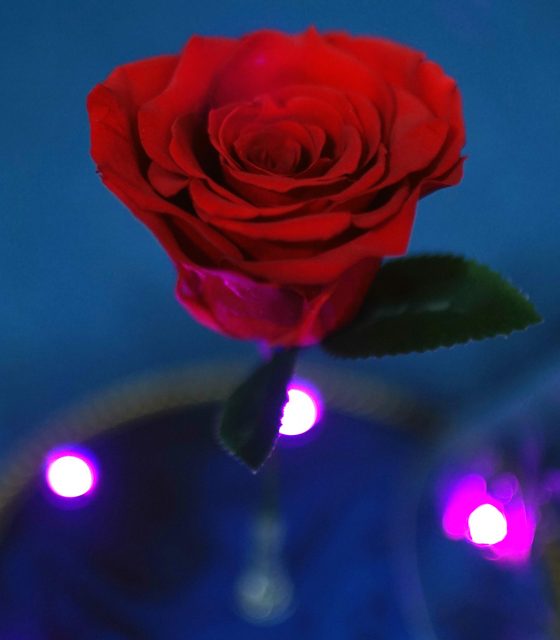 And Disney has done its very best to recreate everything significant about the enchanted flower from the new movie. The stem from the red rose within sits on a clear plastic holder, to make it seem that the rose if levitating within the bell jar. The rose itself is an actual specimen preserved just for this replica, which means that it is not plastic, and yes. Each set comes with its own unique rose, so no two sets are alike.

Small LED lights at the base of the unit, which transmit blue and red hues, bounce of the plastic bell jar, to give the impression that the unit is shimmering. The bell jar is removable, so you can admire the rose without a barrier present. 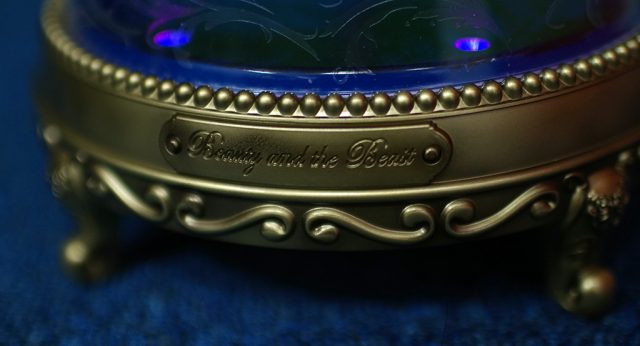 There are also etchings or the thorn filled branches on the bell jar, and the markings help the glass refract the lights from the base of the unit, to give the rose a changing shimmer each time you move the jar.

The base of the unit sits on four pegs, and there are designs on the exterior. The front button is the pairing button and pressing it also plays a short refrain from the movie’s theme song, Beauty and the Beast.  The bell jar also prevent dust from settling on the petals of the flower and Disney could have easily sealed the unit. I suspect that it is detachable because of the uneven weight of the unit.

The base of the encasement is actually a single downward firing speaker, and at the rear of the base is the micro-USB charging port, Power Switch, as well as a switch to control the intensity of the LED lights. And this is why the bell jar is removable. If the bell jar was attached to the base, most users might be inclined to lift the unit by grabbing the jar instead of the base,and the plastic might not hold. 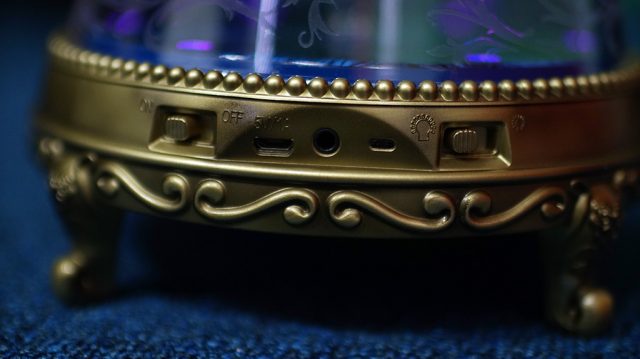 And if you knock the 33cm tall unit, only the bell jar, and not the whole unit, will be moved.

Pairing with the speaker is actually pretty simple – when you turn on the speaker, the lights start blinking and the familiar refrain from the movie’s self-titled song starts to play. The flickering lights are the indicator that the unit is ready for pairing. A search for available Bluetooth devices on your phone will bring up the speaker and once connected, a voice will notify you of the pairing. The speaker itself has no volume controls, so controls come from the connected master device.

If you look at some of the marketing materials, shots of withered petals fallen by the stem of the rose can be seen. These petals are not provided in the final unit, but if you want, you can easily tear off some petals from a cheap plastic rose from arts and craft shops, to complete the effect.

Audio wise, the Bluetooth speaker is adequate in playing music. Chances are that you will not be bringing this replica around with you outdoors or to parties. It will be nestled nicely in a display cabinet, bedside table or TV console and while the audio output is not necessarily powerful enough to fill a whole room from one corner, it is more than enough to power your tablet when you are snuggled in bed watching Netflix on your Samsung Tab or iPad. 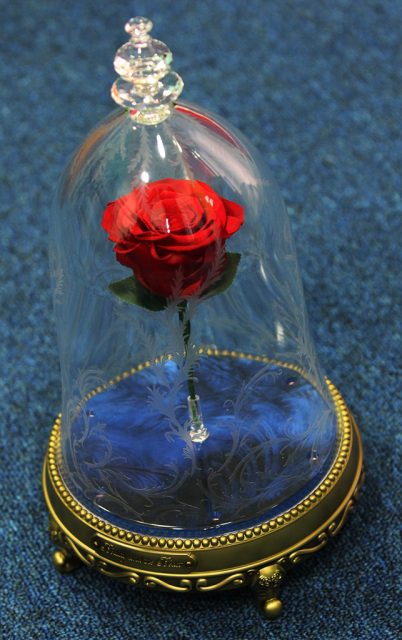 But chances are that this will not be your primary speaker. Like the love between Belle and Prince Adam, this replica was designed to last and to be used as a representation of love. Even if you are not a collector of movie props, there’s no denying the magical allure of a single rose that has captured our hearts and minds.

The Beauty and the Beast Enchanted Rose Bluetooth Speaker is available from select specialty stores, if you an still get your hands on it. Most are also priced from US$299, but if you’re a fan of the Disney movie, or a fan of replicas, the price is a small one to pay.

For our fellow geeks dying to get this, here’s a special offer. You can order the Beauty and the Beast Enchanted Rose Bluetooth Speaker at a special price of S$259.90. The order includes FREE local shipping within Singapore.