Born from today’s technological innovations and a geek’s desire, the dgpower Star Wars Death Star levitating speaker got us once it started playing John Williams’ Imperial March. That and the fact that it floats in mid-air. Sure, floating speakers are not new but this particular one suits a purpose. Instead of striking fear into the hearts of the Rebel Alliance, this fully operational battle station brings about a sense of awe in our geeky hearts. That’s about as much shut-up-and-take-our-money as it can get for any Star Wars fan.

Within the Death Star trench

For starters, even the box that holds the speaker is nothing short of majestic. Just staring at the Star Wars logo is enough to set our geek hearts aflutter. On top of that, the front image of the Death Star, illuminated and hovering in space, made it even more unbearable for us to hold off on the unboxing. 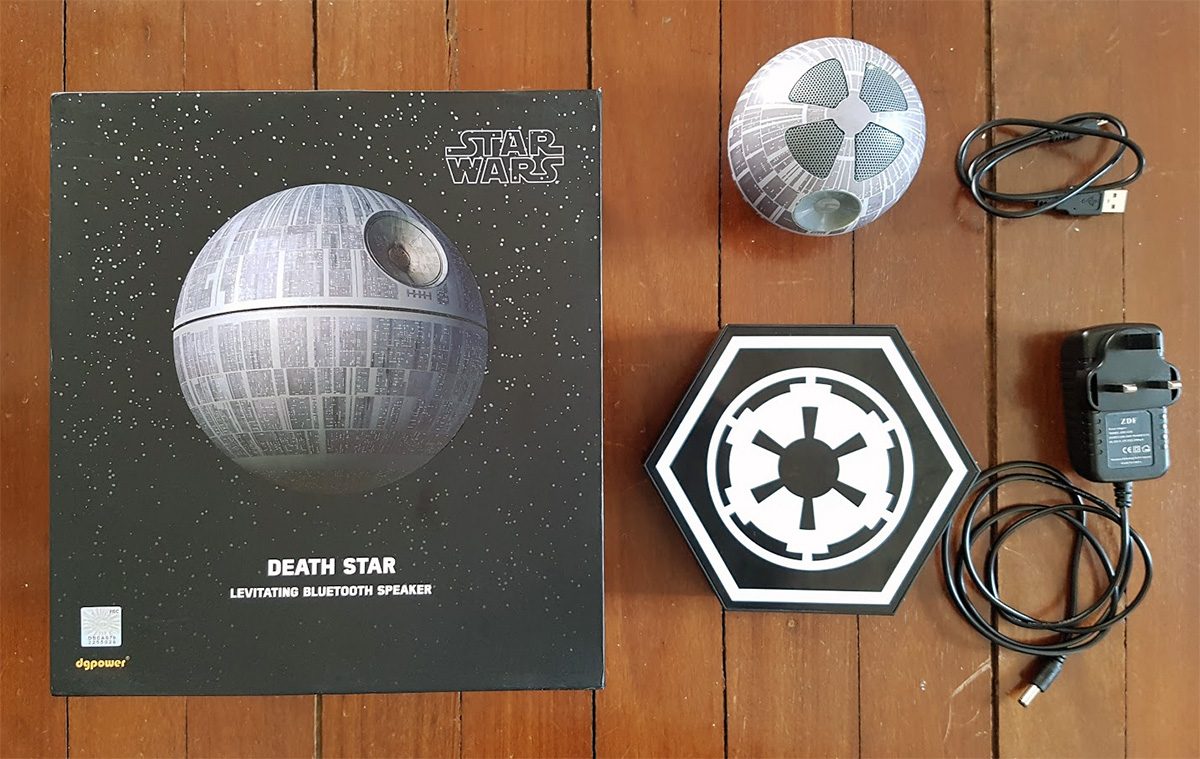 Having seen earlier hands-on photos of how the Death Star speaker fits snugly in one hand, we were quite surprised at how huge the box was. Digging in, we found the basic equipment to get us started with our very own levitating Death Star. The spherical speaker itself is a sight to behold and comes with a micro-USB cable, meant to plug the orb to a power source. Accompanying the speaker is the magnetic base emblazoned with the Galactic Empire insignia, and an adaptor to power the base. Two USB ports are also integrated with the base, so you get to charge both the speaker and your smartphone from a single power source.

Setting up is generally a fuss free and simple affair. Press the power button located at the rear to power up the speaker and promptly pair it to any Bluetooth-enabled devices. No passwords are required either, and all we did was tap on a Bluetooth device listed as DS-809 (presumably, DS stands for Death Star) and it’s done.

Right beside the power button is the light switch that lets you toggle between a quiet, stealthy Death Star or a glowing battle station. While the concave laser dish that obliterated Alderaan in a heartbeat does light up, we figure there could be a bit more thought to this, and top on that wish list would be detachable plastic pieces to emulate the laser, complete with green lights. 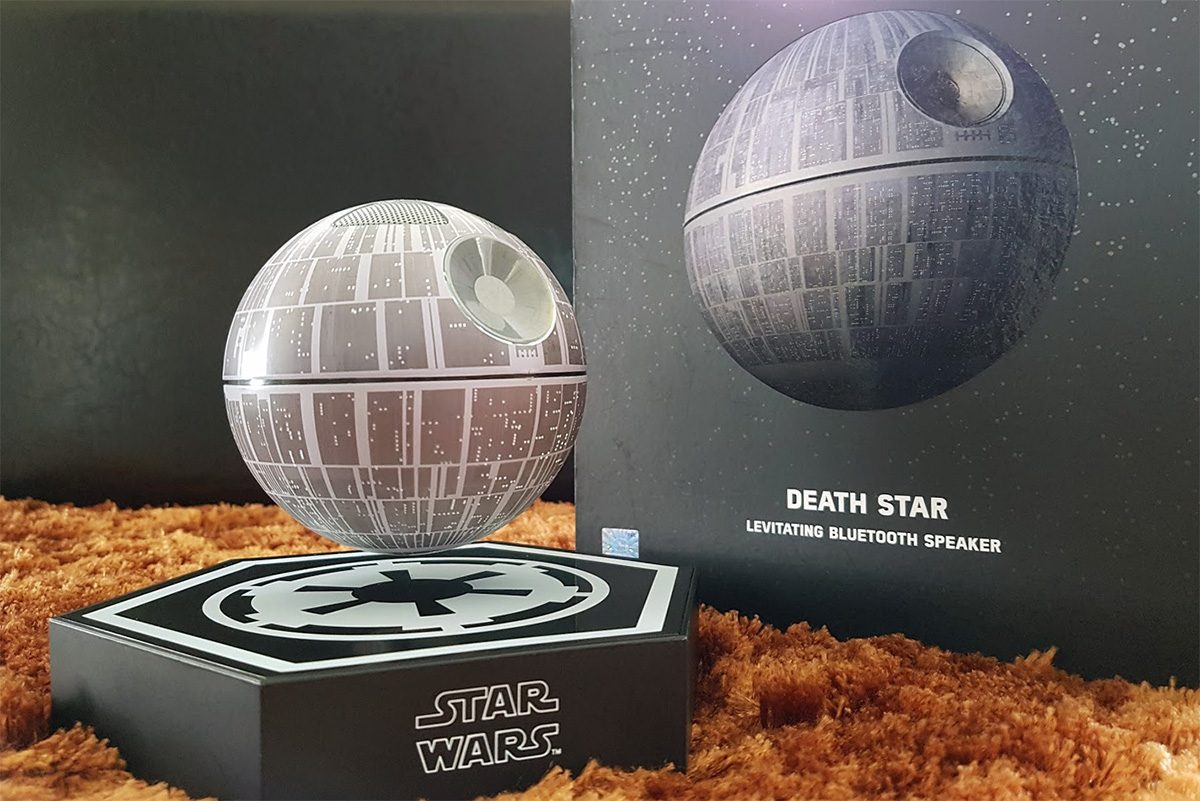 With the lights on and the speaker paired, it’s now simply a matter of placing the orb above the base and levitating it. This is actually pretty tricky and it’ll take all your Force abilities to get it right. We’ll be honest and admit, it took quite a few attempts to get this right. The trick is to set up the speaker, and light it up before you levitate it. Because once you get it floating, you don’t ever want to mess with the speaker, other than to nudge it slightly to rotate it.

That said, practice makes perfect since it’s about finding the right holding technique and sweet spot. With the former, cupping the speaker with both hands and slowly lowering it to the base worked for us. To locate the sweet spot, however, requires a bit of patience and steady hands. But once you do, you’ll feel a slight lock rather than notice the orb be repelled away or attracted towards the base. If all else fails, power down the base and repeat again after five minutes, to reset the magnetic field.

Once we got the trick down, we’ve got ourselves one levitating Death Star, ready to be the topic of envy during house parties. Watch the full video here.

Witness the power of this fully operational battle station

Lest you forget, this floating battle station is a Bluetooth speaker. That means you can stream any music from your smartphone or tablet to it. Star Wars fans would be experiencing goosebumps the moment they hear any Star Wars soundtrack being played from the Death Star speaker. Yes, us included. But on a more impartial note, the speaker does quite well in an enclosed space, able to fill a decently-sized HDB room with its audio. Bass and vocal clarity are considerably good, given the petite nature of the speaker. The latter is especially important since the speaker also acts as a handsfree device to take calls. It’s safe to say that your voice gets picked up quite clearly too since we didn’t have to repeat ourselves during calls.

Drag the image below from left to right to see the light-up effect! 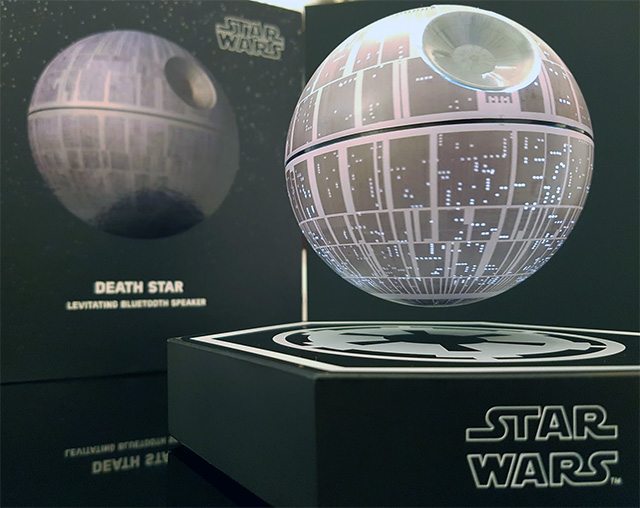 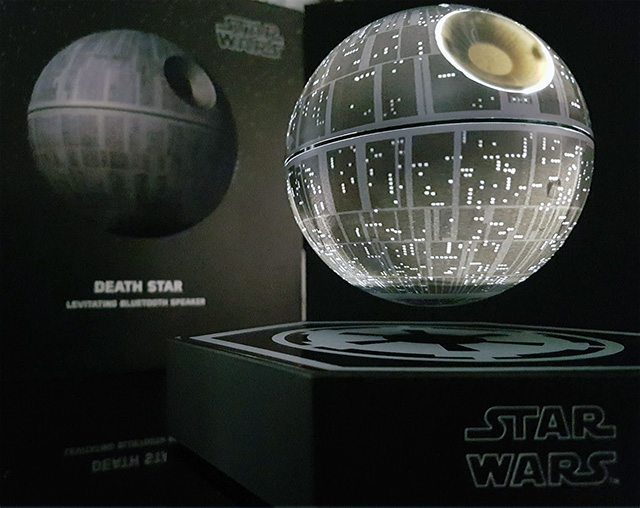 Now imagine the Death Star speaker, floating in mid-air on your bedside table. Its internal lights are on, giving you a functional night light in the form of a fearsome battle station. You wake up in the morning, greeted by the Star Wars opening theme and feel like a million bucks, ready to take on the world or even the Empire.

If you’re a Star Wars fan, or for that matter, an aficionado of cool gadgets, the dgpower Death Star levitating speaker needs to be part of your collection. Some might say its S$289.90 price is unusually steep but we figure that’s not a huge concern for self-respecting Star Wars fans out there.

For our fellow geeks dying to get this, here’s a special offer. You can order the dgpower Death Star levitating speaker at a special price of S$239.90. The order includes FREE local shipping within Singapore.

As far as geek toys go, the dgpower Death Star levitating speaker is as much a great geek centerpiece as it is functional as a wireless boom box.