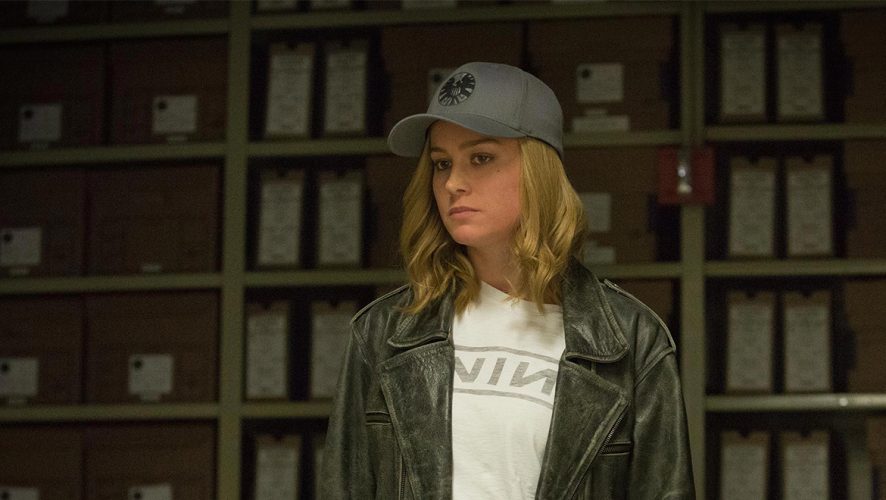 Carol Danvers has landed, with star Brie Larson giving fans of Disney’s incredible MArvel Cinematic Universe the first official look at Captain Marvel. Entertainment Weekly also dropped 10 new photos for the 2019 film, which gives excited fans even more information about the movie. We took a closer look at these photos, and cross-reference them with our comic knowledge of Carol Danvers and the MCU to see what we can learn about the upcoming blockbuster.

When we first saw leaks of Carol’s superhero outfit, a lot of people were confused. The costume had the design of Captain Marvel, but the colour was all wrong. Instead of the red, blue and gold, it was a blue-green combination. Some people were upset, and there was even some speculation that this was done for green screen purposes (what?). Some fans who know what they’re talking about guessed that it was probably a nod to the Kree army. In the comics, Carol gained her powers partially because of Mar-Vell, the original Captain Marvel. Mar-Vell was sent to Earth to spy on the Earth on behalf of the Kree Empire, and green was their primary colour. 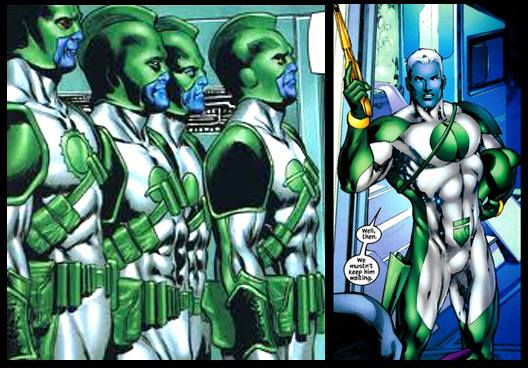 From the looks of these photos, it would seem that these fans are correct. We can see Carol walking with Korath, Minn-Erva, and a few other soldiers wearing similar uniforms. The movie will eschew the traditional origin story format, with Carol already with powers, flying amongst the stars with the Kree army as part of their elite team, the Starforce. On the right is also our first look at Minn-Erva (Gemma Chan), a Kree geneticist obsessed with creating the perfect specimen. 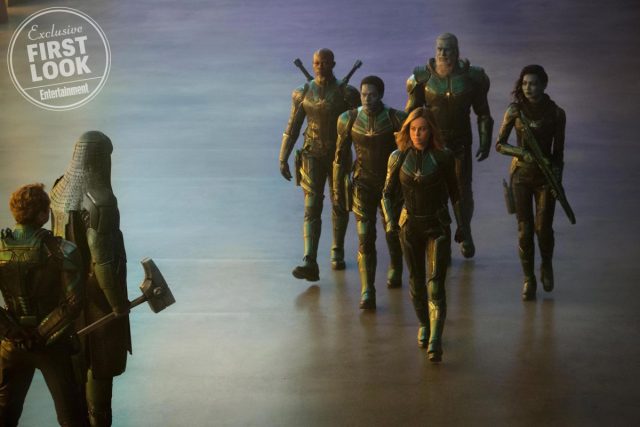 And on that note, we also learn that Korath was once part of Kree army’s elite team, Starforce, along with Carol. We first met Korath in Guardians of the Galaxy as Ronan’s subordinate and he was not a good boy. So what made him jump ship and work for Ronan?

Speaking of Ronan, we assumed that he wasn’t always that evil, and intent on destroying an entire race. He was once a high ranking Kree elite, and here we see him being friendly (kind of) with Mar-Vell and the Starforce. In Guardians of the Galaxy, he refused to acknowledge the treaty set between the Kree and the Xandarians, going so far as wanting to destroy the whole planet. Will this movie serve as a little prequel to Guardians of the Galaxy? How did Ronan, a Kree elite, and Korath, one of the elite soldiers of Kree became the destroyers that they are? 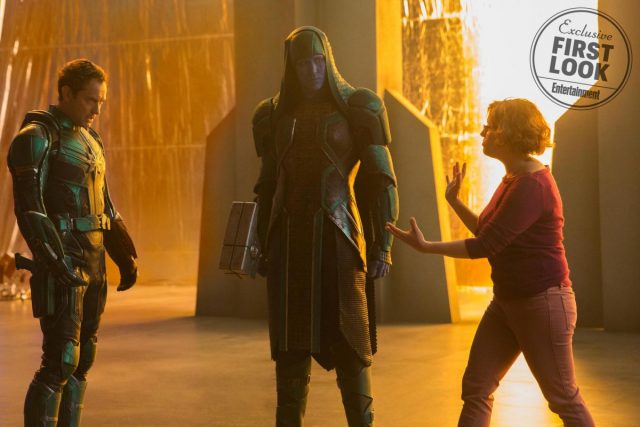 A little side observation here is that the Kree is a blue-skinned alien race. In the comics, Mar-Vell is a minority because of his white skin (not even going to get into how eye-roll-worthy that is). In the movie, both Korath and Mar-Vell is not blue-skinned, while every other Kree seems to be blue. Will there be an explanation for this? If there is, please don’t let it be “white skin is a minority”. Please.

#3. Have we been infiltrated by the Skrulls?

And the photos also gave us the first look at the Skrulls of the MCU. The Skrulls are an alien race with the ability to shapeshift into almost anyone in the universe, and were the instigators of one of the biggest storyline in Marvel Comics in recent years – Secret Invasion. That crossover event spanned multiple titles and shook the very core of the Marvel Universe. In the Secret Invasion storyline, it was finally revealed that the Skrulls have invaded every single aspect of Earth-616. Remember when it was revealed that Hydra has infiltrated almost every part of S.H.I.E.L.D. in Captain America: Winter Soldier? It’s like that, but with aliens and Avengers instead. 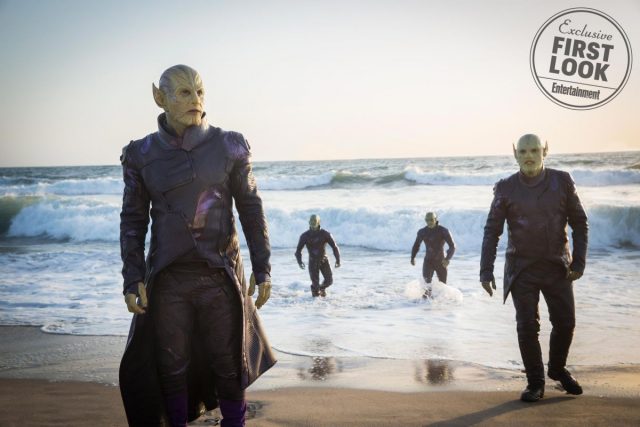 One benefit, if you want to call it that, of the Secret Invasion was that it was an easy way to retcon a lot of things. It wasn’t actually Elektra that became evil, but a Skrull! Marvel might also use this to retcon some things about the Marvel Cinematic Universe (MCU) as well. Was it really Natasha that helped Steve escape with Bucky? Can we trust Tony? Don’t trust anyone, they might be a Skrull!

When Lashana Lynch was cast in the movie, people began speculating that she will be playing Monica Rambeau, Carol’s good friend and a previous holder of the Captain Marvel moniker. Fans were partially correct, as it was revealed that Lynch will be playing Monica’s mother instead, Maria Rambeau. 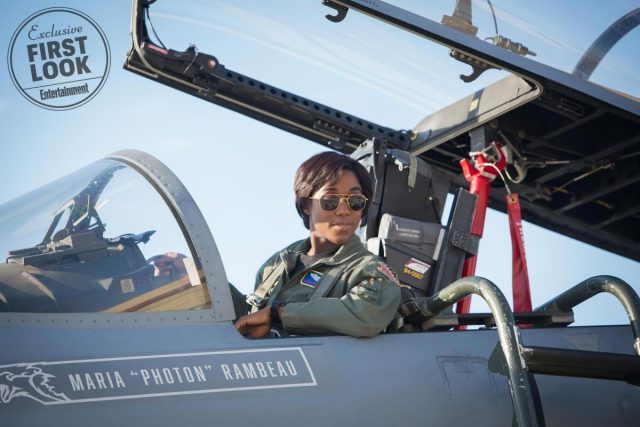 We’re already very excited about this development for a number of things. First, Maria is an Air Force pilot instead of a seamstress like in the comics. Second, as shown on her jet, her call sign is Photon, one of Monica’s superhero persona/codename. Third, as the movie is set in the 90s, there’s a big possibility that once the Captain Marvel storyline moves to the present time (sequel please), we will see Monica Rambeau.

Monica and Carol make one of the best team-ups in Marvel’s history. Not only are they super snarky with each other, their powers are also complimentary. Carol can absorb energy and focus it into a devastating, powerful energy blast, while Monica can turn into pure energy.

Yes, that means Monica has been inside of Carol. 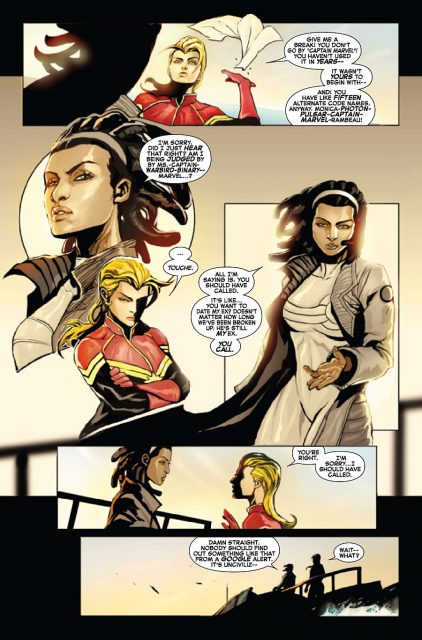 This can be a great way to introduce yet another female superhero into the testosterone-filled MCU. And a Black superhero, as well. (Where’s that all-female superhero movie, Kevin Feige?)

We knew that Samuel L. Jackson and Clark Gregg will make an appearance as Nick Fury and Phil Coulson respectively, so we know that S.H.I.E.L.D. will be part of the movie’s plotline, but its presence might be more pronounced than just a small mention. We see Carol here in a SHIELD cap as well as a Nine Inch Nails shirt. We assume it’s not easy to get a SHIELD cap because they’re supposed to be a secret organisation. What exactly is SHIELD’s role in the movie? 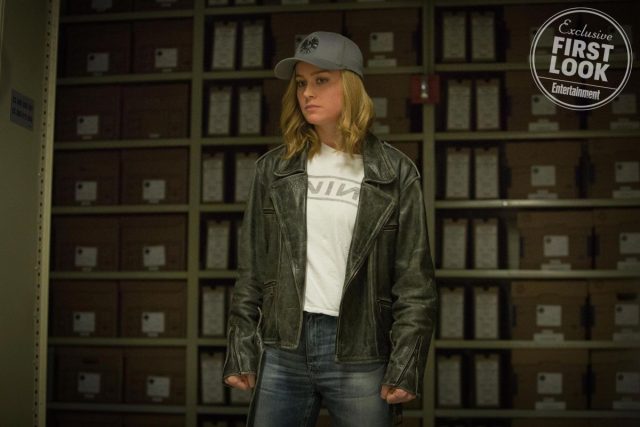 In the comics, Carol frequently comes in contact with SHIELD, but their presence was never really an integral part of her core storyline. Their relationship is more of a professional one. They both want to get rid of dangerous people from Earth, and so they often work together. From what we’ve seen, and what we know of SHIELD in the MCU, it looks like SHIELD will have a bigger presence in Carol’s life. It looks like Marvel’s Agents of SHIELD isn’t the first time SHIELD had a run in with the Krees.

Sidenote, all the band shirts Carol is wearing is especially delightful.

All this information and there is still no trailer! What else did you spot in the photos?