Long-time gamers will definitely be no stranger to the Blue Bomber otherwise more famously known as Mega Man, or Rockman as he is known in Japan. First released in 1987, the 8-bit video game has quickly grown into a franchise that has created a lasting impact among gamers from one console generation to the next, and more recently has even made its way to the mobile phone.

Unfortunately, the Blue Bomber never had the opportunity to feature in a clothing and footwear collaboration, until now.

Capcom has partnered up with Japanese brand ASICS to release special GEL-BND sneakers and apparel collections based on the mega buster-wielding hero. With a silhouette that almost mirrors Mega Man’s shoe of choice, the Rockman x ASICS GEL-BND sneakers come in a  two-tone blue patent leather design that draws inspiration from Mega Man’s signature look.

Along the medial sides of the sneakers are soft yellow pixelated stripes and the words ‘Gel’ are stamped on the back of each sneaker in a classic font typically seen in 8-bit video games. Below that, a thick blue midsole provides support and comfort for its user while also being a nod to Mega Man’s own bulky blue metal feet.

Accompanying these kicks is an apparel collection consisting of a french terry hoodie, three t-shirts, and a nylon gym sack all designed based on the Blue Bomber himself. The texts on the hoodie directly translate to “All Boss No Damage”, a message displayed in-game after a no-damage level clear. It also features a pixelated art of Mega Man sporting his new ASICS kicks. 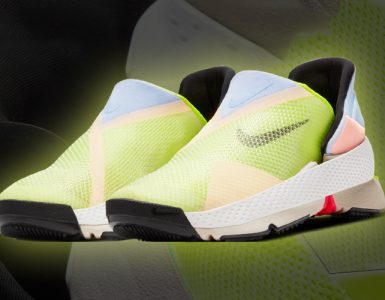 Nike Ditches Laces In Their First Ever Hands-Free Shoe, The Nike Go FlyEase

Not for the faint heart.