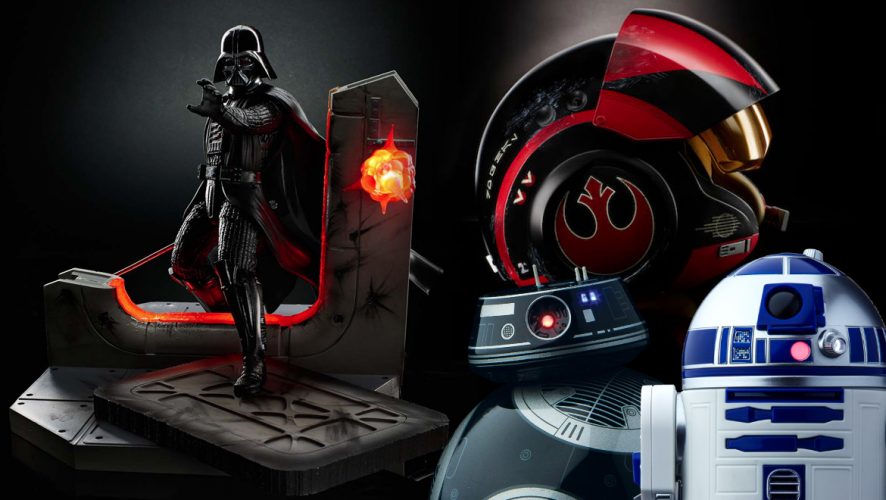 Once again, Star Wars fans worldwide went on a toy buying frenzy starting from midnight today, with the launch of Force Friday II. I decided to partake in the festivities and headed down to the midnight toy shopping spree. So here’s my personal list of TOP 5 MUST-GET Star Wars: The Last Jedi toys:

These caught my fancy back at Star Wars Celebration 2017 in Florida earlier this year. The first wave consists of Darth Vader and Luke Skywalker. Each figurine features a dynamic pose mounted on special bases, made to look like recreations of iconic moments in the Star Wars saga. Each display piece even features light up effects and can be complimented by up to two other Black Series Stormtroopers to complete the scene.

Each figurine is retailing for S$99.99. Grab it (Darth Vader | Luke Skywalker) on Amazon for US$49.99 (with FREE SHIPPING to Singapore!)

Now we can all be X-Wing pilots with Poe’s helmet. The helmet is equipped with surround sound speakers that play a variety of Star Wars sound effects, including sounds from X-Wings, TIE Fighters, and even Poe’s astromech companion, BB-8.

Turn one wheel at the side to rotate the detailed head, and another to open the access hatch and extend the ‘welding torch’. This faithfully reproduced model of BB-8 also comes with a display stand, decorative fact plaque and small BB-8 figure. What’s not to love? And it is even to scale with the LEGO UCS R2-D2.

Once again Sphero has outdone themselves. BB-8 was the hottest seller from the first Force Friday, back when Star Wars: The Force Awakens was released. This year, they’re adding not one, but two more Astromech Droids to their line-up. BB-9E has pretty much the same functionalities as BB-8, with the addition of LEDs on its head, powered by conduction from the orb. As for R2-D2, it has for the first-time-ever in any R2 toy, a fully functional retractable middle leg. Watch it in action via the video below!

This one needs no introduction. Clocking in at over 7,500 pieces, it is the biggest LEGO model ever sold! This hot favourite is no. 1 on the list. Despite is hefty price tag, I’m pretty sure all stocks will be snapped up the moment it’s released on 1 October 2017. For more details and pictures for this exquisite piece, head here.

Witching hour is upon us!