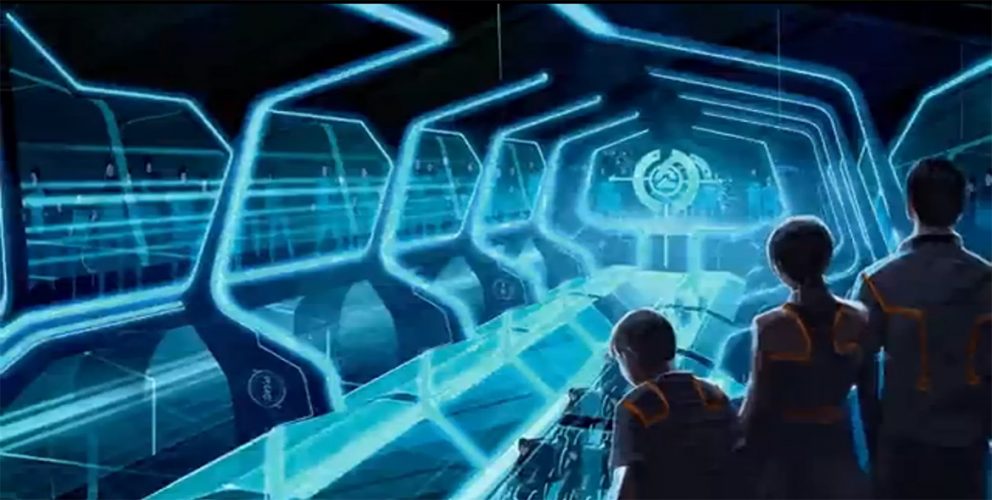 Sorry Main Street USA, but you’re making way for the Garden of the Twelve Friends.

Disney’s upcoming Shanghai Disneyland, slated to open in 2016, is ditching some of the iconic, but let’s face it, rather tired landmarks found in the various Disneyland resorts around the world (Anaheim, Tokyo, Hong Kong, Paris and Walt Disney World in Orlando). And injecting some new attractions targeted at the 1.3 billion people of China, and million more across Asia is a new way of luring the masses.

After all, according to a report last year by industry analyst Aecom, China is expected to add 59 theme parks by 2020. Universal Parks & Resorts announced that it would build a US$3.3-billion, 300-acre theme park in Beijing to open sometime in 2019..

Linking the six-themed lands of Mickey Avenue, Adventure Isle, Gardens of Imagination, Tomorrowland, Treasure Cove and Fantasyland will be the Garden of the Twelve Friends, which will see popular Disney characters taking on the roles of the 12 animal signs of the Chinese zodiac.

“We eliminated Main Street, which started at Disneyland and was designed after Walt Disney’s hometown of Marceline. We didn’t think would resonate here, even though we brought it to Paris and we brought it to Tokyo and we put it in Florida,” said Disney Chairman and CEO, Bob Iger.

But have no fear fellow geeks, as while the look if the new Disney resort will be different, the DNA of the theme park is unabashedly Disney. And yes, Marvel as well. Let’s take a look at some of the new rides that will open next year, in the order that the folks at Geek Culture want to see.

The futuristic arena of Disneyland (and not the failed movie) will be home to two new experiences and a new ride created especially for this theme park.

Star Wars Launch Bay will be home to set-pieces, props and memorabilia from this year’s Star Wars: The Force Awakens movie, and we expect, from the upcoming direct sequels and spin-off movies as well. While Disney and Lucasfilm have not confirmed the heavily rumoured addition of Hong Kong star Donnie Yen in the Star Wars universe, it’s not too much of a stretch to have him as the ambassador of the theme park even if he’s not part of that world. 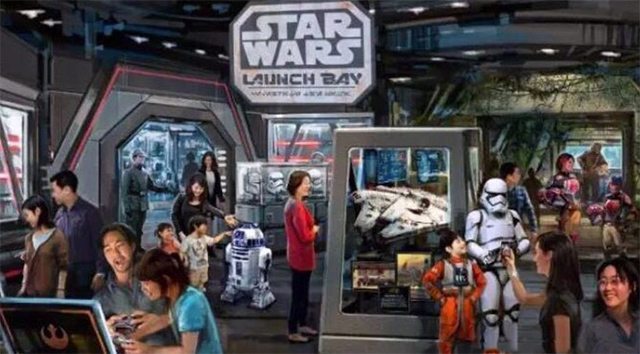 The Marvel Universe showcase will invite guests to attend multimedia mission briefings on many things Marvel and while little details have been provided, we hope that Disney won’t just focus on the Marvel Cinematic Universe, and also include avenues for the younger generation to also experience the actual Marvel comic books, cartoons and graphic novels. Make Mine Marvel!

There will also be a  TRON Lightcycle Power Run roller coaster, which has guests get on board a train of two-wheeled Lightcycles as it is being navigated across a grid..

Disney has also mentioned a Buzz Lightyear Planet Rescue ride, which is a naming departure from the existing Buzz Lightyear rides in Disneyland and Walt Disney World. Can we expect something wildly different that will take us to Infinity, and Beyond?

With Pirates of the Caribbean proving to be a billion dollar franchise for Disney, it is not surprising that Shanghai Disneyland will see the introduction of the its first pirate-themed land, populated by Captain Jack Sparrow and Davy Jones. The new ride, Pirates of the Caribbean – Battle for the Sunken Treasure, looks to be an update of the current Pirates ride, which has visitors take a boat ride and journey into a world filled with with animation, multi-media presentations, updated set-designs and cutting-edge robotics. There will also be the Explorer Canoes, plus dining at Barbossa’s Bounty. 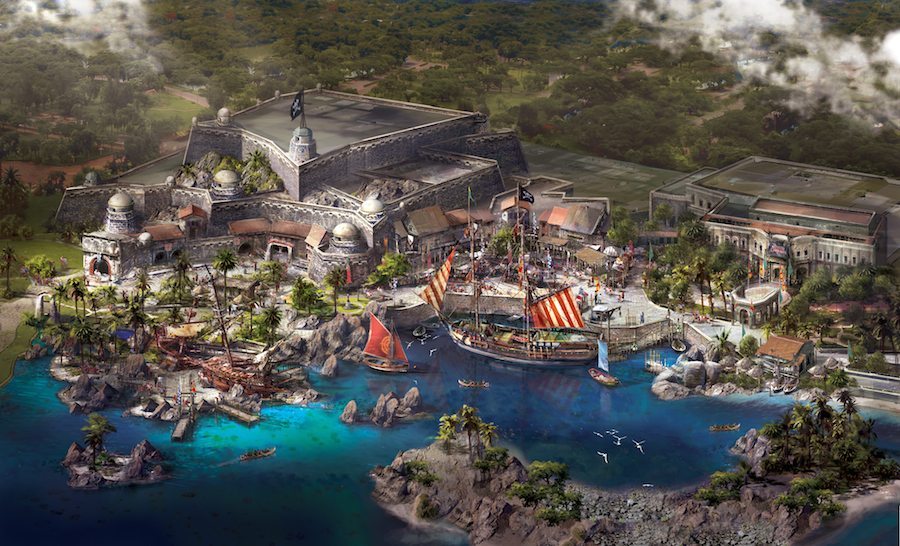 Instead of Adventureland, Shanghai Disneyland will bring visitors to Adventure Isle, which will see attractions such as the Roaring Mountain, Camp Discovery, Soaring Over The Horizon, and Roaring Rapids, which will feature a massive alligator-like creature.

We’re thinking that Soaring Over The Horizon will be a similar presentation of Soarin’ Over California, currently at Disney California Adventure and at Epcot in Walt Disney World. 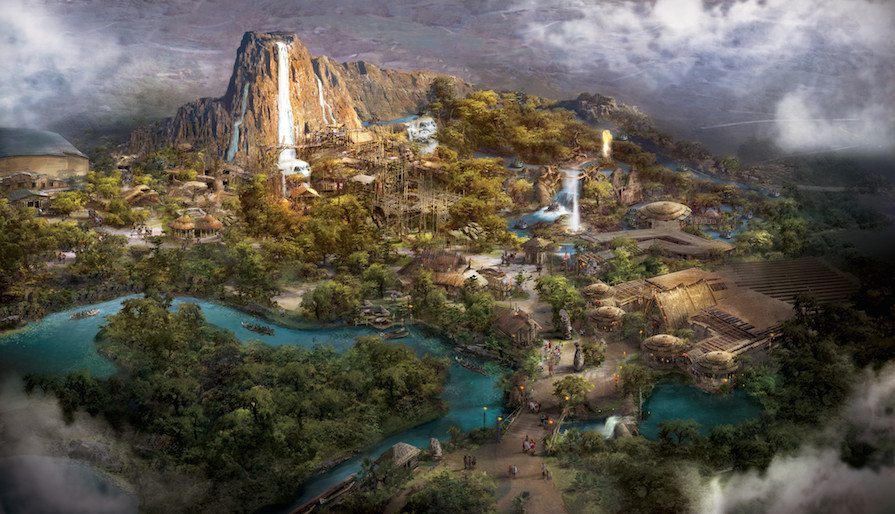 This is the largest land at the Shanghai attraction, and includes the Enchanted Storybook Castle (this looks to be the Cinderella castle, and not the Sleeping Beauty one), and rides include the Voyage to the Crystal Grotto, Seven Dwarfs Mine Train and Peter Pan’s Flight. This is also where the kids go for Winnie the Pooh’s Hundred Acre Wood and the Alice Wonderland maze. 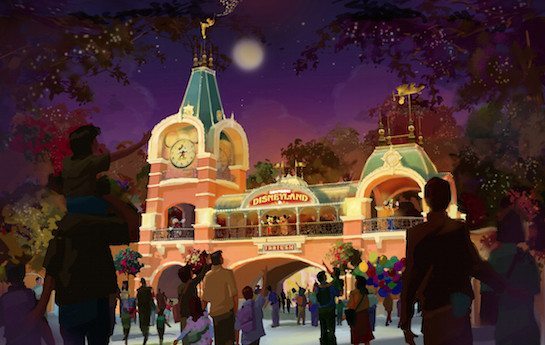 The castle has been branded as the biggest and most complex of all Disney park castles, and it will have a restaurant and an attraction within its walls. It is also designed to contain a boat ride beneath the castle, and will have a stage in front that will host daily shows. There were earlier plans to style the castle with a Chinese inspired roof, though that has apparently been nixed. However, be prepared to see some Chinese elements, such as a peonies, adorn the castle, and most likely, the park as well.

Rides here include Fantasia Carousel and Dumbo the Flying Elephant. There will also be stage shows such as Ignite the Dream, a Nighttime Spectacular of Magic and Light, and Mickey’s Storybook Express. 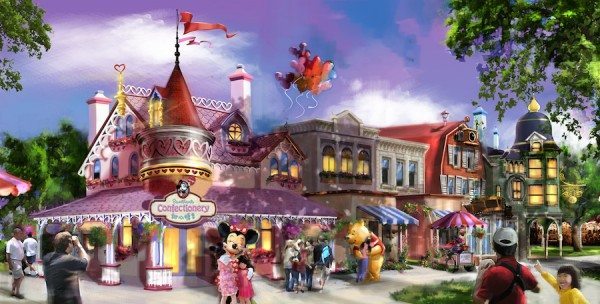 Of course, we would be remiss in our duty is we didn’t point out some of the attractions that are missing from Shanghai Disneyland. Of course, some of these might not have been revealed yet, but Disney, please bring back the railroad!

This is the backbone of the park, and visitors can move from land to land simply by hopping on board a train. Tired parents are known to hop on board to catch a breath, as their kids enjoy a slow moving ride around the park.

This might have to do with the Chinese beliefs when it comes to ghosts and spirits, but Disney’s Haunted Mansion is one of the most enjoyable rides ever crafted, and it’s unfortunate that it will be missing.

There has been no mention of Frontierland, which is really a western (cowboy, not cultural) concept. Then again, adopting the wild west frontier might not work in an Asian landscape. But the Big Thunder Mountain Railroad is one of the top rides at Disney, and we are sad that it won’t be around. Hopefully, the new rides at Adventure Isle can replace this icon.

The massive complex also includes Disneytown, a district filled with shopping, dining and entertainment options. It will also be home to the Walt Disney Grand Theatre, which will house the first Mandarin production of Disney’s The Lion King, and the Wishing Star Park, a central fixture of the resort with ornamental gardens, a 2.5km walking path and a mini lake.

Shanghai Disney is 57% owned by the China state-owned investment consortium Shanghai Shendi, and 43% by Disney. 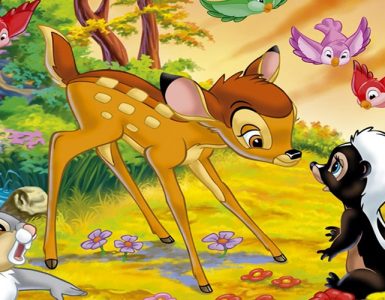