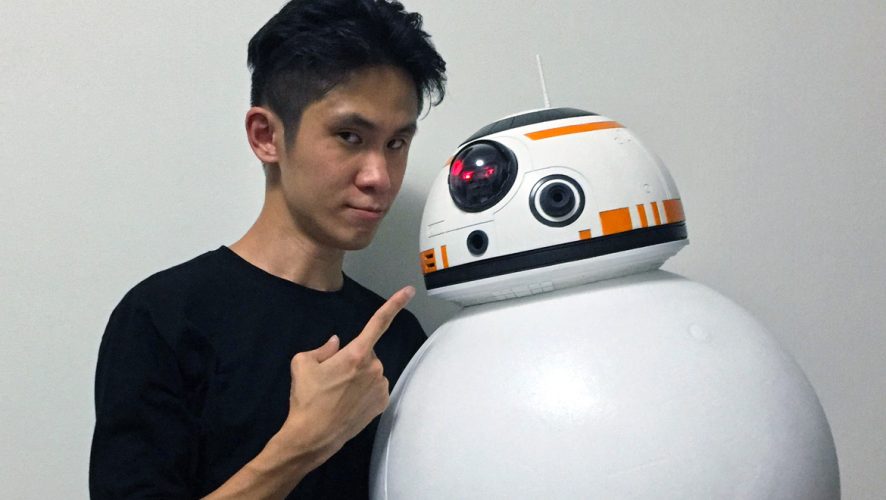 In the past month, Singaporean Star Wars fan Jason Loo has been having many sleepless nights, all for the one droid that he has been looking for.

Sorry R2-D2, but the 25-year-old has been hard at work, building a life-size replica of the BB-8, the new droid featured prominently in the first teaser trailer for Star Wars: The Force Awakens.

And it is not just excitement and adventure driving him on this quest, as the intern at local designer toy company, MightyJaxx, has a 3D printer, and some help from fellow BB-8 fans from the BB-8 Builders Club comminuty at www.BB8Builders.club.

The open source plans have been shared and he has been hard at work adapting them for his pet project.

Ironically, Jason Loo was not even born when the original Star Wars trilogy was completed. In fact, his first Star Wars experience was when he turned 9, and saw Star Wars Episode I: The Phantom Menace, on the big screen for the first time. That film was also his first peek, not only in the world of Star Wars magic, but in the realm of special effects.

“Episode One was the very first movie I’ve watched that immersed me into a whole new world of movie magic. The experience felt like a dream after the movie, and it really made me want to recreate that world I just came out of,” noted the Singaporean.

“I’ve always been fascinated by movie costumes and props since young, and will always try to make my own replica of them if possible.”

Originally, his BB-8 was merely a small project that started because of its unique looks and design.

“When I first saw the teaser trailer for Star Wars The Force Awakens, and then with BB-8 rolling out on stage at the Star Wars Celebration 2015 video, I fell in love with the droid instantly!”

His first attempt to build a BB-8 was a smaller scale endeavor, in the form of hacking a Sphero and trying to repurpose one as the rolling droid.

“I did some online research online and saw some people were recreating a mini version of BB-8 by hacking a Sphero and decided to make one too.”

After hours of dissecting it and modifying the mechanical parts within, he came face to face with some good and bad news. Sphero actually announced that it was launching a toy version of the BB-8, using the original Sphero itself.

“I was disappointed then, but soon I found a group of enthusiasts at BB8Builders.club who were 3D printing the full scale BB-8, and they are sharing the files with the world!”

As it turns out, Jason was a proud owner of the Zortrax M200, a consumer level 3D printer. He came across the medium while still in school and was enamoured by it. However, it was only recently that he managed to save up for a household machine. According to Jason, the Zortrax M200 is extremely user-friendly and produces reliable prints with high resolution details.

“Personally I love to make things, because the joy of creating something out of nothing gives me a very unique sense of achievement, I guess it is like giving birth to a baby? Armed with my 3D printer, I was confident that I would be able to do it myself.”

Rather than rely fully on the available open-source BB-8 schematics, Jason went and grabbed all the toys, images and related files that he could find.

“I tried to get as many references as I could, such as purchasing official toys and graphics, to get an as accurate as possible image for the build,” he explained.

“And also, by re-watching the Star Wars Celebration video many times.”

In the instances where he was unable to match the schematics, he modified them by adjusting some methods of construction, based on the materials he could obtain locally. The bulk of the replica is printed with acrylonitrile butadiene styrene (ABS) plastic, which is the same material used in Lego bricks. One thing he added were lights on the BB-8 and he started it before the wiring diagrams and code were made available on the BB-8 Builders Club group.

He has since started painting some of the pieces, using a variety of paints, from normal spray cans, to paints from model kits paints and even airbrush ones. The aim is to complete the project in time for the premiere of the movie on 17 December and so far, things have been moving forward, barring a few hiccups.

“Most of the difficulty is in the materials with the exact size required for the project. One example is the main camera lens that requires a plastic ball that is 70mm in diameters. I needed to ship it from overseas because I couldn’t find the right size locally.”

All in, he reckons that he could end up spending close to a low four-figure sum on his BB-8, and that is excluding the blood and sweat invested in the project, as well as on the utilities spent. If things work out, there are plans to show the project later this month at GameStart 2015.

He adds with a smile, “May the Force be with me!”