Are you telling me you are rebuilding a DeLorean, as an electric vehicle?

The way I see it, if you’re gonna rebuild an iconic car, why not do it with some style?

Doc. Emmet Brown clearly looked into the future when he announced that his DeLorean was electrical.

The DeLorean Motor Company, which was acquired by Steve Wynn in 1995, announced in a blog post on the company website that it is considering producing a revised DeLorean as an electric vehicle.

“That said, with EV’s becoming more mainstream, we’ve been considering switching to an all-electric as the future. It certainly makes for an easier path through emissions maze which still looms large over any internal combustion engine. While an electric Cobra or Morgan may be a little extreme for their potential market, we’ve already seen that an EV DeLorean – as we displayed at the 2012 New York International Auto Show – is not such an “out there” idea.”

Previously, the company indicated that it planned to go into production in 2017 for an updated version of the 1980s icon but it is now looking at an electric version, though it did not indicate when this new version would hit the market.

The car was famously used in the much-loved Back to the Future trilogy of movies, turning the car with gull wing doors into a time machine that was initially powered by plutonium, before it was transformed into fusion technology in the then futuristic 2015 technology.

The DMC DeLorean was the only vehicle produced by John DeLorean’s DeLorean Motor Company (DMC), before it went bankrupt, but not before selling several thousand models into the market. Movie and car enthusiasts have been known to collect the remaining models, in an attempt to cobble a working car together, or recreate the time machine vehicles (there are at least 3 different versions) from the movies.

If you can’t wait for the actual car, you can pick up the official timepiece, the DMC Watch, or look for back issues of the 1:8 scale model Back to the Future DeLorean replica. Better yet, there’s even a DeLorean Autobot and in Playmobil form.

Just so we’re clear though – don’t be the sucker going nuclear over this.

Back to the Future BTTF DeLorean

Great Scott! It's about time, before we're OUTATIME! 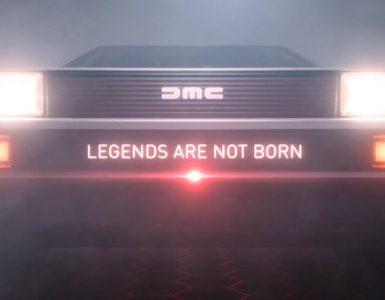 Great Scott! Are we going to see a DeLorean-themed mechanical keyboard soon?