This article contains some mild spoilers about Tomb Raider: Definitive Edition. You have been warned, geeks!

I will admit right off the bat: I wasn’t blown away by Square Enix’s announcement that they would be porting 2013’s excellent Tomb Raider to next-gen consoles. While I absolutely adored Lara’s most recent (or rather, earliest) outing on Xbox360/PS3, I couldn’t help but wonder if this was really necessary. Surely Crystal Dynamics has something better to do in the wake of their recent success?

Out of the Eidos/Square Enix stable, perhaps Deus Ex: Human Revolution Director’s Cut would have been a more logical choice for a next-gen port. We could always use more “I never asked for this”.

I’m sure Adam Jensen would agree. Or maybe not…

In any case, I put my reservations aside, and decided to give TR:DE a chance to impress me. Let’s see if it does.

A Fresh New Coat of Paint

Upon starting a new game, the visual improvements are apparent. Already heavily touted in previews, Lara has had quite a bit of work done on her; her facial model has been subtly tweaked, softening her features ever so slightly in an aesthetically pleasing fashion. 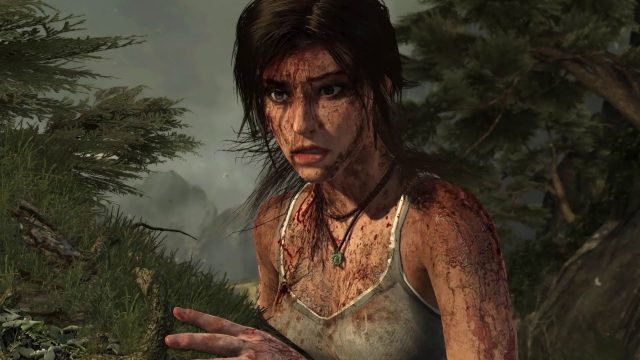 TressFX (AMD’s fancy hair physics engine), previously exclusive to the PC version of the game, has been applied to Lara’s trademark brown locks. Polygon counts on all character models have clearly been increased, and I never really noticed much in the way of jaggies during my playthrough of the game.

Most strikingly, Crystal Dynamics has performed some kind of occult techno-wizardry with regards to lighting and how it interacts with human skin. Character’s faces and other patches of exposed skin absorb and diffuse light realistically, avoiding that “wax figure” effect that we see all too often on video game characters.

Rolling in the Deep

It’s no secret that Lara gets pretty banged up during the course of the game. She tumbles about in dirt, gets tossed around in muck, and has most of her body streaked with copious amounts of blood from her numerous injuries, some of which can get pretty nasty.

Oh yes, Lara gets downright diiiiirrrrrrrrty in this game. This is actually a selling point. Context, people.

The improved particle effects are nothing short of amazing. Mud and dried blood now cling to Lara’s skin and clothing in a believable manner, whereas in the original version they just looked painted on. Which they essentially were, because textures!

But enough of that. The biggest surprise came from an unexpected avenue. While the upgraded character models and textures are a substantial step up from their last-gen counterparts, they pale in comparison to the real star of the show…

…the island of Yamatai.

Yes, really. A nubile British bombshell has been bested by a volcanic rock formation in the looks department. In a genre where the colour palette tends to be dominated by a handful of brown and grey variations, TR:DE is, quite literally, a lush island in a sea of flat, monochromatic tones.

Several times during my playthrough, I caught myself spending a good 2 to 3 minutes just standing still and taking in my surroundings. The island feels so much more vibrant in this version; branches and foliage gently rustle in the wind, water gushes and ripples beautifully, and the lighting shifts realistically during the game’s day/night cycle.

The weather effects are a joy to behold here, and the way that moonlight reflects off of rain-soaked boulders is mesmerizing enough that I wanted to reach out and touch them. Climate conditions can change at the drop of a hat on Yamatai, and I found myself wanting a thunderstorm or snowstorm to occur, just so I can watch it unfold before my eyes. 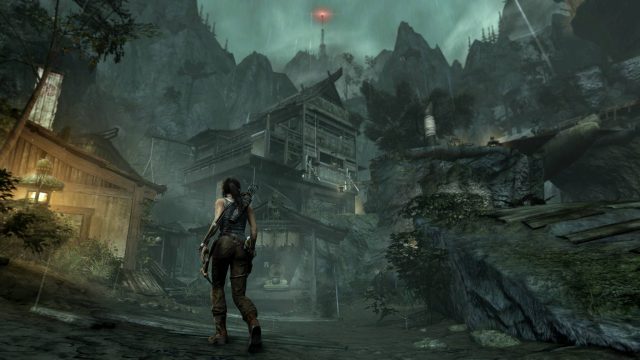 Its almost as if Yamatai were truly alive, and you could feel every ebb and flow of the island’s pulsing heartbeat being reflected in the environment itself. Truly, this game contains some of the best level designs I have ever seen in a video game.

I know it looks like I’m laying on the hyperbole really thick here, but words can’t do justice to what I’m trying to say here. Even the screenshots don’t come close, static as they are. You’ll have to experience the game in motion for yourself to truly understand what I mean.

This is essentially the exact same action-adventure that you have played a year ago, albeit much prettier, so I’m not going to go into too much detail here. The core game hasn’t changed at all; you’re still in control of a very-wet-behind-the-ears Lara Croft, fighting against all odds to survive after being shipwrecked on a legendary mystical island.

You never get tired of seeing Lara bash a baddie’s face in with a rock.

Controls are tight and responsive, with great action set pieces and exploration set at an even pace to lure you deeper into the mysteries surrounding Yamatai. The game gives you quite a bit of leeway when it comes to jumping and obstacle traversal so that you never really feel like you are on rails.

The various weapons handle well with just the right amount of heft, while hand-to-hand combat feels appropriately visceral and in-your-face. Enemy combatants can be pretty relentless, tossing firebombs to flush Lara out of cover and rushing our titular heroine down with machetes and bootleg riot shields.

Storytelling and voice-acting are top-notch, with solid performances from a well-rounded cast. Camilla Luddington convincingly portrays Lara’s transition from scared little rich girl to badass bow-slinging iron lady as she gets tossed from one life-threatening situation to another. Speaking of which, I would have liked to see a behind-the-scenes video of her recording all of Lara’s death scenes, though; that would have made for a hilarious (and possibly disturbing) piece of unlockable content.

As a nice bonus, TR:DE comes with all of the DLC that has been released from the last-gen version, but they’re really just outfits. There is one additional tomb to explore and plunder, though seasoned gamers will likely cruise through it in 10-15 minutes. Not very substantial at all, but I give them points for effort.

There were a couple of new gameplay features to be found on the PS4 version that I reviewed. The first was the usage of voice commands through the PS4 microphone. You can use your voice to bring up the map, or switch out your weapons during firefights. You can also navigate the sections of the map screen with your voice if you wish.

It’s a nice gimmick, but not particularly useful; in fact, I found myself using it less and less as the novelty wore off. I believe most gamers would still prefer the precision and immediacy of hitting a button to perform the desired action. Voice commands are relatively cumbersome compared to the controller for that purpose.

Saying “show map” just doesn’t work as well as tapping the touchpad on the PS4 controller, which responds instantaneously.

The second feature was the ability to navigate your GPS map using the touchpad on the Dualshock 4 controller. This I found to be much more useful in practice, as it works pretty much exactly like how you would use a map on a smartphone or tablet. You could swipe across the touchpad in any direction to navigate the map, or zoom in and out accordingly by drawing your fingers closer together or further apart. I was initially concerned that the touchpad would not be sufficiently sensitive, but I can safely say that it works well enough for the game’s purposes.

Overall, these gameplay enhancements felt pretty weak to me. But to be fair, I believe Crystal Dynamics were just being conservative with their first next-gen title (which happens to be a port of a great game); they couldn’t really change all that much without upsetting the apple cart, so to speak.

Tomb Raider 2013 was a title that would define the words “franchise reboot” for years to come. The Definitive Edition is all that, and more. If you didn’t manage to get your paws on Lara last year, and you just bought a shiny new next-gen console, then you absolutely do not want to miss this. Take a trip to Yamatai; I assure you, you won’t regret it.

Lara Croft has been through some tough times, both as a heroine and as a franchise. With Tomb Raider: Definitive Edition, she is leaner, meaner, and has clawed her way back back up to the top of the pile as the queen of the genre. I eagerly anticipate her next adventure.