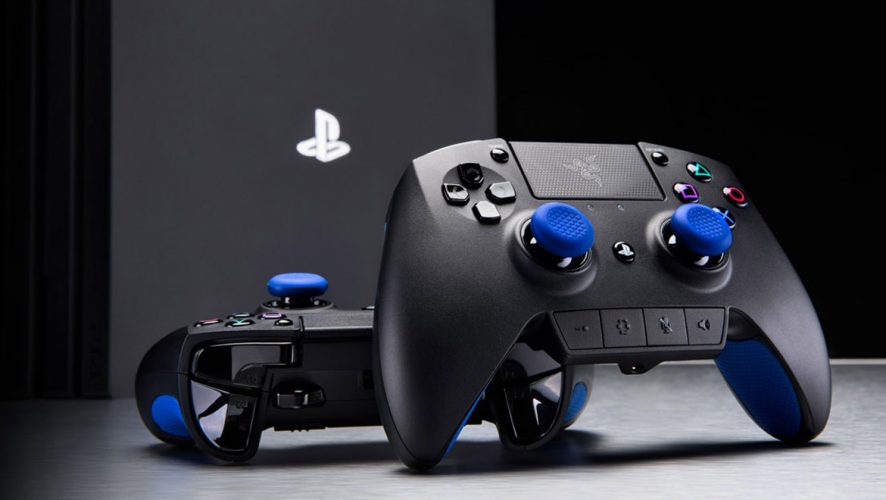 It has been more than a year since Microsoft’s Xbox launched the Xbox Elite Wireless Controller, the premium, and currently de-facto, leader in cutting edge console controller design and technology for professional gamers. Other brands, including SCUF Gaming and Razer, have also introduced their own version of a professional console controller for the Xbox but, strangely, current console leader PlayStation has been quiet on this front, until recently, when it announced not one, but two “Pro” controllers for Sony’s customers to choose from.

The catch? Both these controllers are licensed products and, unlike the Elite, is not made by the parent company. One is by Nacon and the other is by Razer. We got our hands at the Razer Raiju and while it makes a good case for itself, there is something lacking with its finishing move.

Razer’s attempt at changing the Dualshock 4 deserves some credit, though, as it has added adjustable triggers that can be remapped, along with headset controls. How you ultimately judge the Raiju however, depends heavily on the type of games you play. In many of the games, the Dualshock 4 does not lose much in terms of performance and that is something consumers will have to take into consideration. 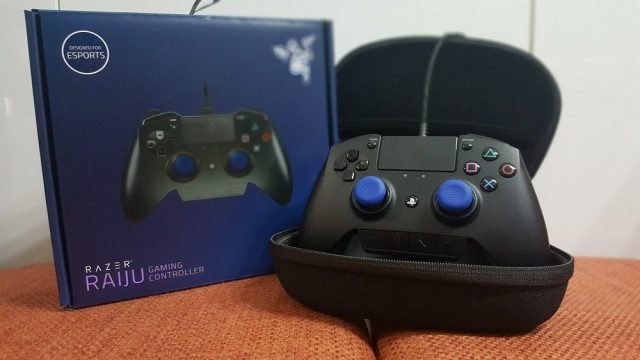 The obvious difference between the two is that the Raiju is a wired-only controller. This is supposed to eliminate input lag that may arise from wireless communications between the Dualshock 4 and your PS4. With the earlier Dualshocks, the USB cable is merely meant for charging. However, the latest Dualshock 4s that come with the PS4 Slim and PS4 Pro can be used in wired mode as well, which begs the question, is the Raiju worth the inconvenience?

Designed like the Xbox One controller, the Raiju is hefty, which is a boon for players who have big hands, and find the Dualshock 4 too small for their liking. But inversely, gamers with smaller hands might have a harder time using the analogue sticks here, due to their positioning in relation to the controller’s frame.

The additional headset controls are located at the base of the Raiju (where the 3.5mm jack is), allowing you to control the mic volume, muting, and changing of gaming profiles on-the-fly. In my opinion, this is a godsend considering the tedious nature of trying to manoeuvre past the PS4 controller’s multitude of menus, just to adjust the volume. This extra functionality goes a long way in improving the gaming experience. 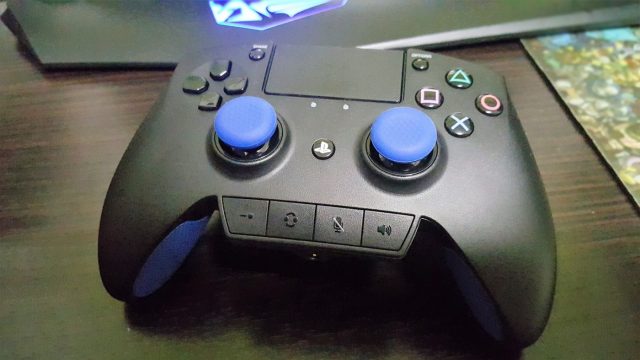 At the top of the Raiju, there are sliders that control how much travel the L2/R2 triggers will take. Simply put, a longer travel allows you to more accurately control the pressing of the triggers. This helps to get those half-presses off much easier than usual, and delivers a greater degree of control. A shorter travel means the triggers are well, triggered much more quickly, which grants a notable advantage when playing shooters.

The rear of the Raiju is where the bulk of the enhancements are. With four additional triggers that can be remapped to take the place of any standard button input, players can load up macros for whichever game they fancy. Two additional bumpers are located just next to the standard shoulder triggers, with two more on the bottom of the Raiju. A good example of how the extra triggers help is in a first-person shooter, where remapping the commonly used melee attack (usually R3) to one of the triggers eliminate the need to use the right analogue stick. 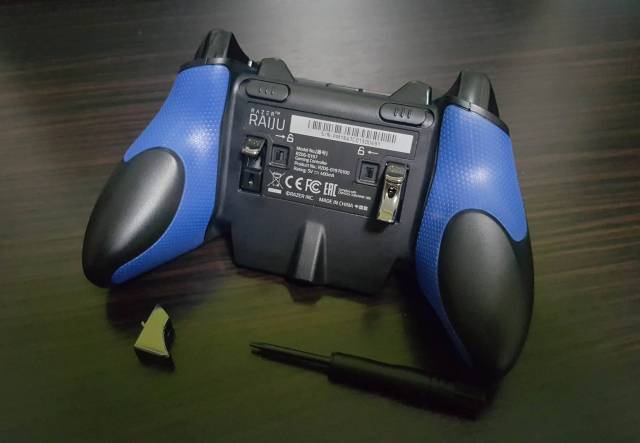 This allows players to keep their focus, and aim in the thick of the action. In playing Battlefield 1 and Titanfall 2, the extra triggers definitely helped in keeping my aim, without the need to remove my fingers from the analogue sticks. For those that do not want the bottom triggers, they can be easily removed with the included screwdriver. However, only the protruding trigger can be removed and this merely exposes the button within, which I still managed to hit occasionally. 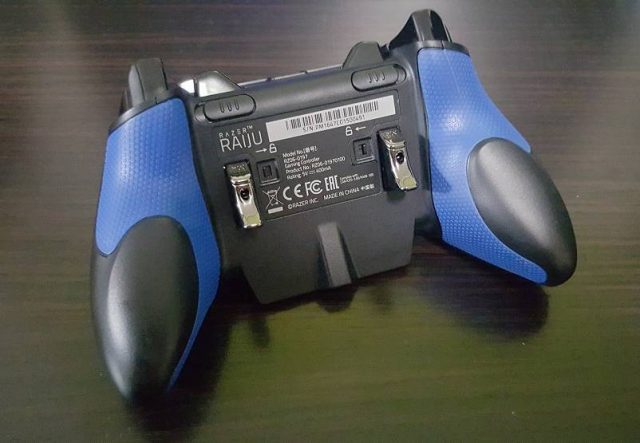 The one change I love are the face buttons on the Raiju, which deliver a better experience than the ones on a Dualshock. Closely resembling the mechanical switches on some keyboards, the face buttons now give a very tactile and obvious click when depressed. Even the constant clicking sounds did little to mess with my enjoyment.

That said, the directional buttons are a different cup of tea, especially when it comes to playing fighting games. Unlike on the Dualshock, the direction buttons of the Raiju are four separate buttons, as opposed to a singular pad with four directional buttons. While this offers clear and precise controls for games requiring only four directional controls, it also makes hitting the four diagonal directions a more difficult affair. Street Fighter V is now a less enjoyable affair, compared to a side-scroller like Shovel Knight, which uses less quarter-circle control, and more left and right ones. 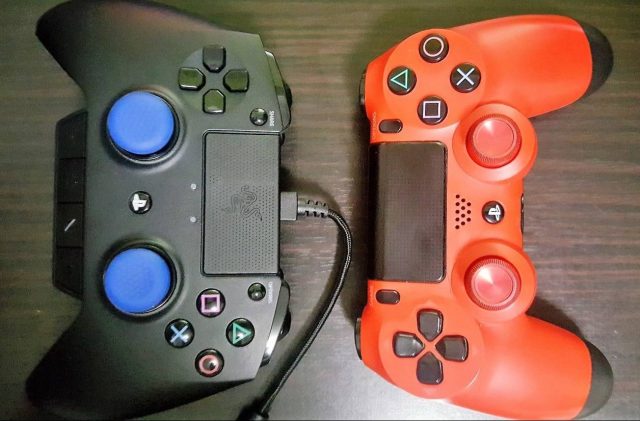 In the end, the Raiju is an acquired taste. With its wired connection designed to reduce lag, larger size for bigger hands, and the extra triggers and customization, it offers an option for those of you who require more precision additions to the standard controller. Yet, it is not without its quirks, and the inability to turn on your console with its PS button stands out. Yes, the wired connection is somewhat a blessing and a curse, and extra triggers do nothing if you do not need that many buttons, to begin with. Ultimately, the Raiju appears to be geared towards a certain crowd of games and gamers but does little else with other genres.

While it is effective at the job it was obviously designed to do, for a hefty sum of £132, it is very unlikely that it will take the place of the one who can do it all adequately.

The Razer Raiju is currently only available in the US and European markets.

The Raiju is a premium alternative in a market lacking options for the more hardcore gamers. Credit to Sony, Razer’s Raiju has to work hard to stand out from the already great Dualshock 4. It does its job wonderfully when it can, at a price. The high entry point, however, gives little opportunity for Raiju to be considered a must-have for gamers.

If you're living alone in the dorms, or need cool comfort while working from home, this is for you.