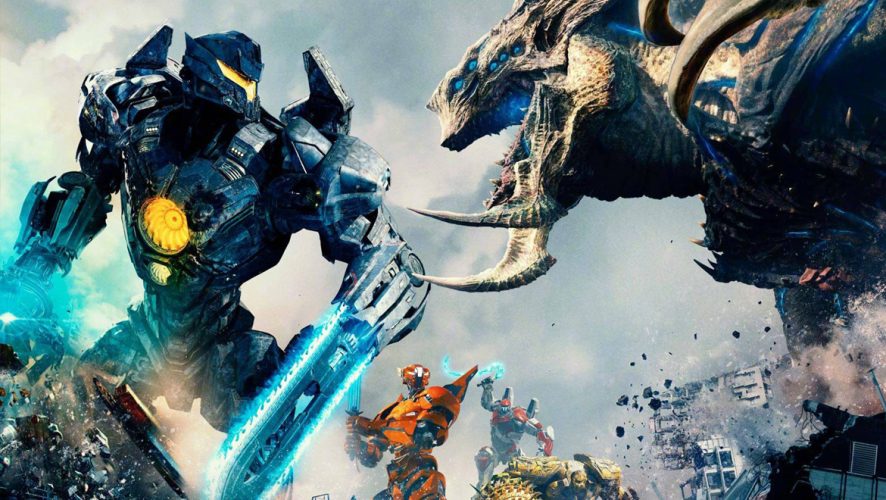 “Today we are cancelling the apocalypse!” roared Stacker Pentacost (Idris Elba) in his iconic speech made in the original 2013 Pacific Rim. Well, it seems like someone, or something, didn’t get the memo, because the apocalypse is still chugging full steam ahead for  the new sequel, Pacific Rim: Uprising.

Set 10 years after the breach was closed, humans have begun picking up the pieces and rebuilding cities from the monstrous Kaiju. The Jaegers are no longer fierce protectors of Earth in this time of peace, but are instead employed for petty police work by the Pan Pacific Defense Corps (PPDC).

Jake Pentacost (John Boyega, Star Wars: The Last Jedi), son of legendary pilot Stacker Pentacost, has abandoned his promising pilot career for a flippant lifestyle, partying his days away and scavenging to get by. He crosses paths with Amara Namani (Cailee Spaeny), a scrappy yet intelligent 15-year-old who built her own illegal makeshift Jaeger using salvaged mech parts.

To avoid arrest, the two are forced to enlist in the PPDC, with Jake as ranger and Amara as a newbie cadet. Jake butts heads with a rival ranger, Nate Lambert (Scott Eastwood, Suicide Squad, The Fate of the Furious), and has quite the reputation due to his father’s legacy. Amara struggles to fit in with the group of other young trainees, while Jake heads into the cockpit of the Gipsy Avenger to fend off a mysterious Jaeger gone rogue, the Obsidian Fury.

The successful original was led by visionary filmmaker Guillermo del Toro, who handed Steven S. DeKnight the reins for his big screen directorial debut. DeKnight’s previous works involve showrunning TV series such as Spartacus and season 1 of Netflix’s Daredevil, so he had some pretty big del Toro-sized shoes to fill.

And yes, del Toro is sadly missed and his absence leaves a very big hole in this Transformers-esque sequel that is big on explosions, but does little in terms of world-building.

DeKnight evidently chose to head in a starkly different direction from del Toro for the sequel. The original broke new ground on a Transformers vs Godzilla style of monster movies and focused more on evoking feelings of nostalgia, with the gritty bunker setting and old-school, bulky mech designs. Uprising is completely different, as it leapfrogs into the future with technological advancements that we’ve all see before and frankly, the  original Pacific Rim rose above that.

There are now 5 Jaegers – Gipsy Avenger, Saber Athena, Bracer Phoenix, Titan Redeemer, and Guardian Bravo. These complex names are uttered at breakneck speed in fight scenes such that, apart from Gipsy Avenger, you never know which Jaeger is which. They’re mostly reduced to “the fast orange one” and “the one with the spiky wrecking ball.”

The Jaegers are faster, more brightly-coloured, and each has a different weapon, making a comparison to Power Rangers practically inevitable. Gone are the clunky, hand combat fight sequences with the Kaiju. These mechs were supposed to be the pinnacle of human innovation, but they previously moved slowly and used weaponry sparingly. While Gipsy Danger pulled out a sword pretty late in the original, someone finally realised that hey, swords are pretty good, and equipped the Gipsy Avenger with two right from the get-go.

As for the Jaegers’ pilots, Jake lives in his father’s shadow, and Boyega lacks the commanding presence that Idris Elba had in leading the Jaeger pilots. He jokes a little too much such that when it becomes time to deliver his big speech, they fall flat, like much of his jokes. But as long as you don’t try to compare him to his father (“I am not my father”, he repeatedly asserts), then Boyega’s performance is entertaining, as he breathes a breath of fresh air into an otherwise heavy atmosphere with his witty humour and charm.

Jake’s endearing brother-sister dynamic with Amara is what steals the show. Compared to the awkward, romantically-charged relationship between previous leads Raleigh Becket (Charlie Hunnam) and Mako Mori (Rinko Kikuchi), Jake and Amara have great chemistry which comes off as natural and refreshing.

They bicker like real siblings and he goes from encouraging her one moment to calling her insulting nicknames the next. The young Cailee Spaeny was also fantastic as Amara, especially considering this is her first major role after debuting in a 2016 short film Counting to 1000.

But apart from our leading duo, everyone else in the cast is generally mediocre. Kikuchi’s return as Mako barely makes an impact, ranger Nate Lambert sports a bland, uptight personality, even if he is, as Jake points out, ridiculously handsome,  and his past conflict with Jake is left unclear. Amara’s fellow adolescent cadets are severely underdeveloped, such that you don’t know their names or frankly care about what happens to them.

Eccentric scientists Dr. Newt Geiszler (Charlie Day) and Dr. Hermann Gottlieb (Burn Gorman) return yet again for comedic effect, but not so much comic relief as Boyega already provides much of the film’s humour. Ron Perlman,  one of del Toro’s go-to actors and a scene-stealer from the first movie is notably absent here, which is a huge pity. Outside of fight scenes, the plot doesn’t takes a break, progressing quickly yet predictably with continuous twists and turns, and barely any stops for a heartfelt moment.

It’s a shame that composer Ramin Djawadi (Game of Thrones) also did not return for the sequel, which was instead scored by Lorne Balfe (Terminator Genisys, Assassin’s Creed: Revelations). The original soundtrack was a thematic blend of electronic elements with grand orchestral music, especially in that iconic theme song which sadly was hardly used in Uprising.

But the biggest change with the sequel is not with the lack of a strong director, credible actor and co-stars, or soundtrack. Due to the original movie’s incredible success in China, Uprising is clearly pandering to its biggest audience. A Chinese corporation is part of a major plot point, and the head of the company Liwen Shao (Jing Tian, Kong: Skull Island), as well as the new guy running the jaeger programme, Marshal Quan (Zhang Jin), serve as more than just token Chinese characters. There a surprising amount of Mandarin in this Hollywood film, and you would be right in thinking that there’s no way any Chinese will end up being the villain.

But ultimately, we come to watch Pacific Rim films not expecting a riveting plotline, but to see huge robots kick giant monsters in the ass, and that’s exactly what Uprising offers. All the action sequences in the first movie were in the dark, either at night or underwater, but this time the scenes are in bright daylight, so the CGI isn’t shrouded in darkness any longer. The visual effects are stunning, and fight scenes are well-choreographed.

Fans of the series will be debating the twist in the third act, as well as the mighty morphing kaijus.

Pacific Rim: Uprising is what you’d expect out of a big Hollywood Michael Bay-esque blockbuster: in-your-face visual effects, fact-paced action, and predictable storyline. Viewers might be polarized, as if you were a fan of del Toro’s style, this sequel probably won’t be your cup of tea due to how different it is.

But if not, then Uprising delivers feel-good, fun robot vs monster action where you can switch off your brain for 2 hours, and simply enjoy.

Despite its predictability, this sequel is still worth a viewing, thanks to the charisma of its leading actors and outstanding visual effects.