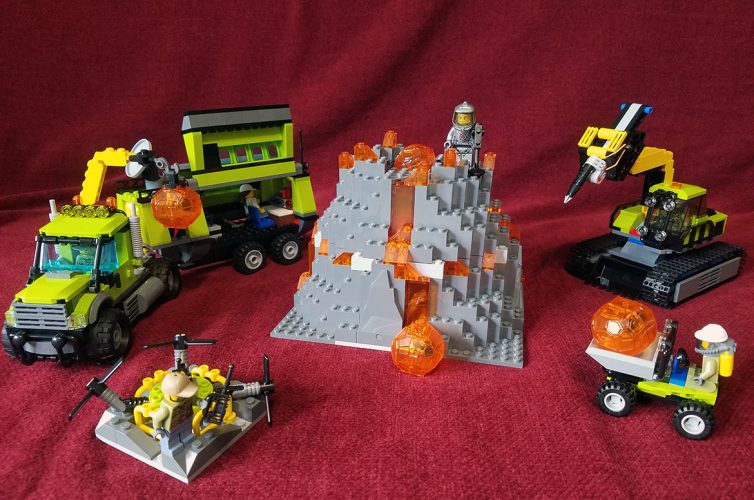 The idea of a base is an interesting one, as it implies a headquarters of sorts. Add in the notion that a volcano might be involved, and you get the impression of a James Bond type of lair, where a secret base has been built within the confines of a volcano.

Unfortunately, or fortunately, LEGO Volcano Exploration Base 60124 is nothing like what its name suggests.

As part of the new Volcano series of LEGO sets, the company has been releasing vehicle sets that deal with exploration centered around volcanos. With the other sets in the series, the volcano is actually hidden in the background – mentioned but never seen. Their only occurrence is in the form of lava balls each with a precious mineral inside.

With this massive LEGO set however, owners finally get the promised item – an actual working volcano that the rest of the set, comprised of a mobile base of operations and other vehicles, can circle.

The volcano itself is constructed across two bags of BURPs, or Big Ugly Rock Piece, so while casual LEGO fans would find this construction to be fairly simple, AFOLs might feel otherwise. The volcano is basically made up of 4 different halves, based on 2 designs. Joining them together means the volcano is symmetrical. There is a Technics mechanism within, where a push of a level ejects a lava boulder from the spout.

The way the mouth of the volcano has been constructed means that only one boulder can fit into the mouth, though it it possible to squeeze in a second boulder above the first one, to create more of an erupting effect as the boulders blast out from the volcano. Pompeii anyone?

To be honest, I was expecting a lot more. The volcano itself is actually rather short and if you look at the box art, the complete volcano is actually placed on a raised platform, to give it that towering effect. I guess it’s a choice of whether you want the added height created by more BURPs, or can live with creating the illusion of a massive volcano, by using what could be the tip of the larger volcano in your role play.

Next up is the mobile lab, which comes in two parts. In the front is the semi, which comes with its own towing hook/hoist, to haul the molten lava boulders around. Attached in the rear is a laboratory, with gull wing door panels that open up, to reveal scanning equipment within. On the outside of this vehicle are the usual tools, as well as a satellite dish. Both pieces work well as a set, and as standalone ones.

The truck’s towing hook/hoist gives the vehicle a nice edge and pretty soon, I was towing just about anything I could get my hands on. While the truck comes with working doors, it is easier to just remove the top, to insert the minifig driver into the driver’s seat.

The lab itself works as a trailer, but it’s a stretch to call it a base, as there is only room for one scientist inside. The gull wing doors are a nice touch though, and, together with the green colour, makes the two vehicles look like a B’rel class Klingon Bird of Prey.

The other major vehicle is the tracked one that comes with an extended arm with a harpoon tip, meant to crack the lava boulders. The tip and the arm parts are actually joined by a rubber band that creates a spring loaded set-up, for a more authentic recreation. The top of the tracked vehicle can be rotated, and it wouldn’t take much to fashion a tank using the tracks itself. Like the truck, the driver’s seat can only be accessed by removing the lid of the canopy.

The last two vehicles are a drone and small tipper truck. The tipper truck works with a collection stand to hold one lava boulder, probably for the harpoon arm to rack open, but I actually find that the tri-rotor drone fits into this collection stand much better, as there are openings within the grills to fit each of the extended rotors. Each arm has to be angled away from the body though, as a straight placement will cause the rotors to collide with each other.

As for the minifigs, this set comes with the usual driver, scientist and explorer type, but the most interesting one would be the volcano scientist, who looks to be wearing some sort of protective armour, in the form of a headgear that covers his chest. This figure is new to the LEGO series, and it is only available here, and in LEGO 60125 Volcano Heavy-Lift Helicopter set.

Both 60124 and 60125 are massive sets, but they actually form up several set pieces, instead of merging into one grand set. The good news is that instead of buying multiple sets to form some sort of creative play, both these sets are already pre-designed to get the creative juices flowing right out of the box.