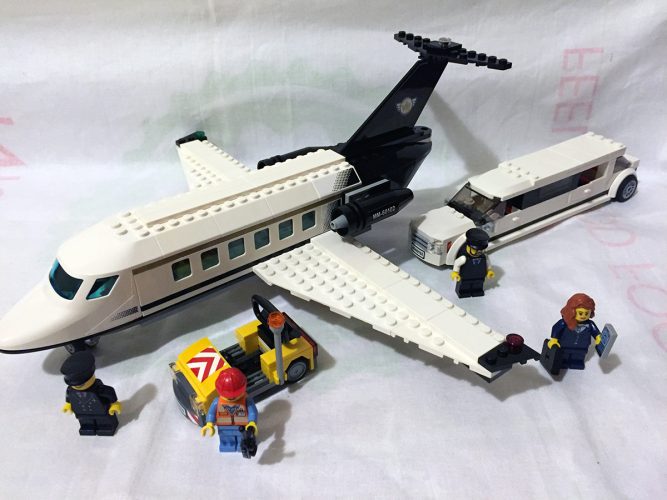 I am not going to lie. When I first got this set, I thought it would be a pretty boring one, especially after reviewing the Volcano Explorers sets that had all kinds of cool vehicles and moving parts. This was just a jet and two vehicles that couldn’t really do anything but roll around. But, dear reader, I am big enough to admit when I am wrong, and I was quite wrong. As I was building the set (photos to follow, as usual), I kept thinking that this was the kind of set that would really only appeal to the kids who already love planes and aeronautics. But then I started noticing all the little details inside both the private jet and the limousine, and slowly but surely started changing my mind.

But first, the builds!

A magical box of fun and imagination, begging to be opened.

I was surprised to learn this was a five-bag, three-booklet set. Even the Supply Helicopter set was only three bags and two booklets.

We start with Kevin and Emmet calling the shots on the first booklet, which will ultimately become the airport traffic vehicle. Brian and Sarah use their respective vehicles to get all the pieces in one nice pile.

Suzie, Jack, and Jane start hammering the chassis together.

William starts welding the back lights and license plate in place as Kenickie and Pepe look on expectantly. They’re not used to waiting so long to get working on a car. They’re kind of experts on the matter, you guys.

William then welds the front lights and license plate in place, and Kenickie and Pepe are still waiting.

Oh my gosh, William! Hurry up and finish all your light fixtures! We understand those “FOLLOW ME” lights are important, but we’re dying over here!

Kenickie and Pepe finally get to work on the motor and wheels in the car, but they don’t really get to enjoy themselves as Eldin and Felicia immediately start painting the vehicle.

Next comes the first half of the private jet. Kevin and Emmet call out the instructions, but Sarah and Brian need to get all the pieces in nice stacks for ease of construction.

William, Suzie, and Jack start on the belly of the jet.

As the belly grows longer, Jane, Pepe, and Kenickie’s expertise is required. Pepe and Kenickie are just happy to not have to wait so long this time.

Jane and Bob work together to get wings ready. Bob didn’t really have to cut that piece any smaller, but he likes being super exact.

William, Suzie, Jack, and Jane affix one wing to the belly…

…and then the other. They’re pretty happy this ended up being so easy. They were afraid Bob’s exactitude was actually not exact at all.

Now it’s time to get the pieces from the third bag together, and finish up our jet plane. Normally, Kevin and Emmett are a really good team, calling instructions like the best team they are. But once in a while, Emmett loses focus and chases shiny things. Kevin has to get him back on track.

Sarah and Brian dutifully use their machines to put the pieces in order.

Once William finishes welding the glass into the walls, Pepe and Kenickie put them into place.

William welds the cockpit windows into place as Felicia paints in some important design work.

Jane, Suzie, and Jack put in the cockpit and the roof, but not too tightly. We need to be able to remove it later for ease of access.

Pepe and Kenickie make sure the jet’s wheels are in place (important for when the jet wants to lands), while Felicia and Eldin paint in more details on the back of the plane.

The final pieces of the jet get put in: Kenickie and Pepe work on the twin engines while William welds the all-important tail piece. Felicia hangs on for dear life as she paints in the VIP logo.

And the jet is now done.

The pilot fits snugly into the cockpit, and can easily keep track of the flight with his onboard computer.

In the main cabin, our high-powered businesswoman can work on her laptop and watch the news while noshing on a croissant and drinking some juice. Her cellphone is also near at hand in case she gets an important call or text.

Behind her there’s a screen where she can keep track of the flight so she always knows exactly how long she has left before she lands for her next international meeting.

It’s time to start on the stretch limousine, and Kevin and Emmett once again call out the instructions from the third booklet. Sarah and Brian start sorting the first half of the limousine pieces.

Jack, Suzie, and Jane do the blunter work on the limousine chassis, while Kenickie and Pepe do the finer work.

Bob gets tagged in as Jack and Suzie go take a break. The doors and some of the interior gets put in.

We’re at the final booklet, the home stretch! Kevin and Emmett waste no time calling out the instructions. Brian and Sarah can barely keep up! William takes the opportunity to do some welding work on the windows.

Jane starts hammering in the engine, much to Pepe and Kenickie’s consternation. William welds one of the windows into place.

Pepe makes sure Jane didn’t completely destroy the engine while William welds in the other window, and Bob installs the refrigerator.

Jack and Suzie jackhammer in the roof of the limo while Eldin and Felicia paint the outside of the car.

And the stretch limousine is done!

The limo driver is ready to ferry very important customers around town.

Our high-powered businesswoman can watch her favourite business programme and can grab an ice-cold lemon-lime popsicle if she gets a bit hungry. Is there enough in there for the rest of us?

All three completed builds, all for the comfort and ease-of-travel of our clearly very important businesswoman. Those little details inside the jet and limousine are what ultimately changed my mind about this set.

Yes, it may still appeal mostly to the kids who already love planes, but all those little details made this set for me, the foodstuff in particular. What kid doesn’t want to eat popsicles in a limo and bread on a jet (okay, the bread not as exciting, I will admit, but still!)? The inside of the jet can also accommodate two more minifigures comfortably (maybe five or six more uncomfortably), but unfortunately the same cannot be said of the limo. That’s a one minifigure party bus, but at least that one minifigure will get to eat all the popsicles it wants.