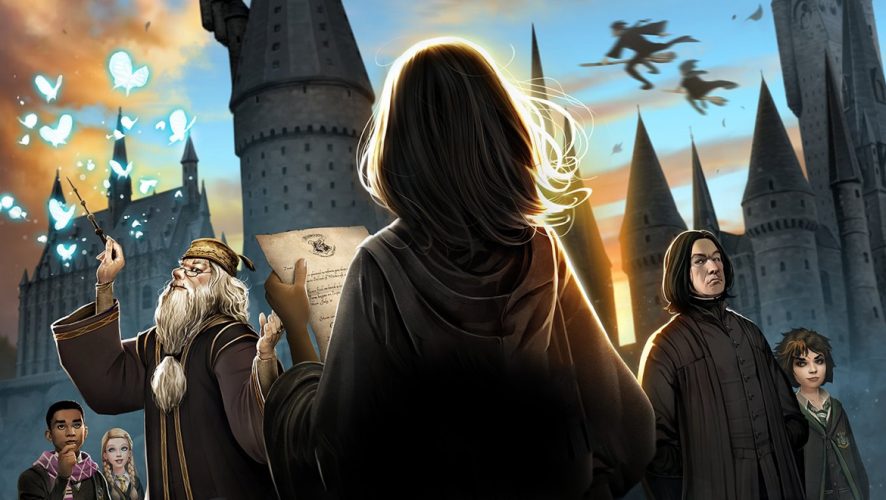 Really, why hasn’t there been a Harry Potter role-playing game until now? The rich, magical universe is the perfect opportunity for a game where players enrol in Hogwarts and live out their wizarding fantasies. With the latest the collaborative effort between Jam City and Portkey Games – the new label under Warner Bros Interactive Entertainment –, the dreams of all Potterheads have finally come true. Jam City, the mobile game developer known for their colourful puzzle games Panda Pop and Cookie Jam, took it upon themselves to create one for Potterheads.

Creating a role-playing game is distinctly different from Jam City’s specialty of bubble-popping and colour-matching games; so admittedly I went into Harry Potter: Hogwarts Mystery feeling a tad skeptical, especially wary of the microtransaction-based models of mobile games. 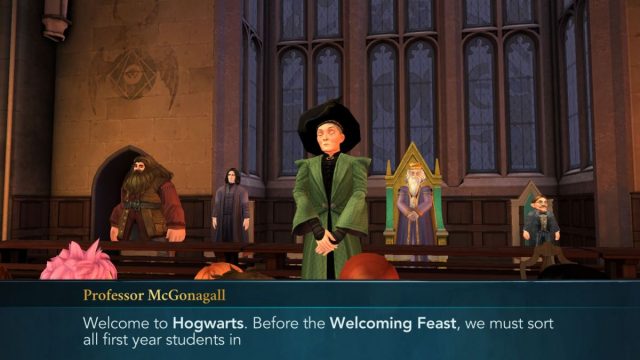 The game kicks off with character creation, where you create your own avatar and customise your appearance including skin colour, facial features, and hair. The options are limited but decent enough, and soon you’re off to Diagon Alley to get supplies, where you first meet Rowan, a fellow first-year student at Hogwarts who befriends you.

The game progresses just like how you’d imagine getting ready for Hogwarts would be like, with visits to shops that look just like they appear in Harry Potter and the Philosopher’s Stone — Flourish and Blotts for books, and Ollivanders for a wand. 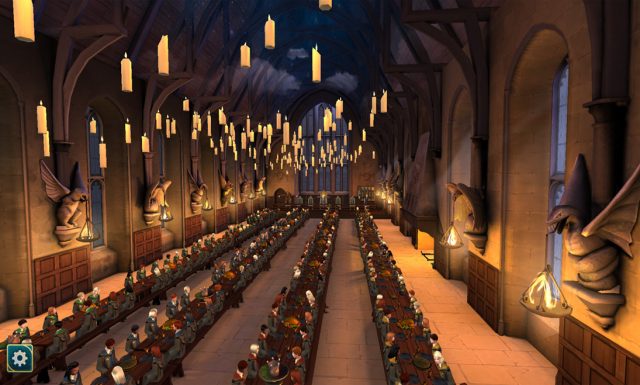 Once you’re at Hogwarts, you head over to the Sorting Hat ceremony at the Great Hall of Hogwarts, where you meet a couple of familiar faces, including Professor McGonagall, Professor Dumbledore, and Professor Snape, some of whom are actually voiced by their respective acting talents from the original franchise. Luckily, just as how the Sorting Hat takes your preferences into account, you’re allowed to pick your house (Hufflepuff for me!). Jam City probably understands how proud and loyal Potter fans can be to their houses, so taking away that choice would’ve been a bad idea.

You aren’t forging your own path in Hogwarts, but instead you’re stepping into the shoes of a character with a pre-existing story. Whatever name you choose, your character enters the school with a reputation, where students and teachers alike recognise you. Sounds familiar? It mimics Harry’s first year in Hogwarts, except not really – the game is set in the 1980s, which means pre-Harry era, and the same Professors. 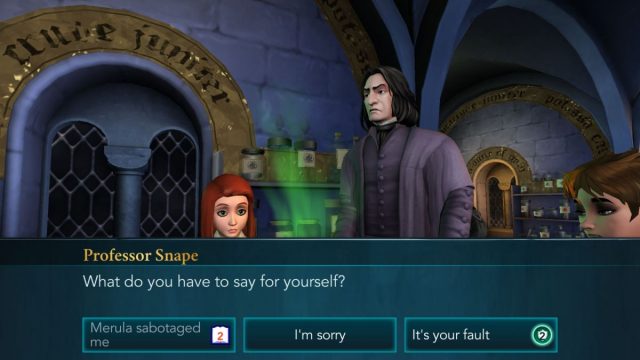 Folks are wary of you because your older brother, Jacob, was previously expelled for breaking the school rules in his dangerous search for the fabled Cursed Vaults (Chamber of Secrets, anyone?). As a result, many other students treat you with disdain, and Professor Snape is, as expected, especially harsh on you.

Your character isn’t the only one similar to a book character. Rowan is essentially Hermione, but with her anxiety dialled up to the max. She’s a bookish know-it-all with no friends, and tries a little too hard to appeal to your character’s compassionate side in order to become your friend. This includes frank statements like “Most people think I’m either a useless weakling or an awkward nerd. You’re weird like me.” Wow, thanks.

Not hating on the underdog here, but there’s just too much-repeated emphasis on her weirdness and how she has no friends, while all this time they could have showcased her positive traits such as her intelligence and loyalty. Since you talk to her quite often, it borders on insufferable at times. 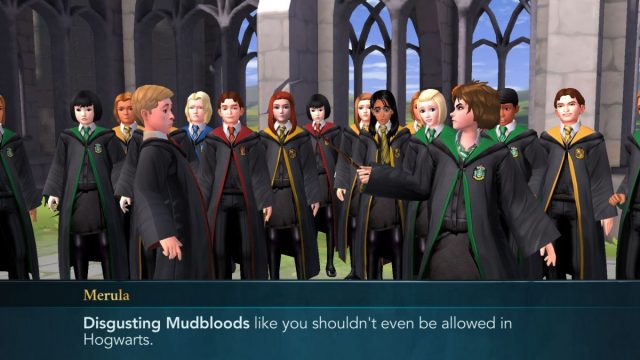 Other characters you’ll meet include Merula, the Draco Malfoy equivalent from Slytherin, who wants to be the best witch in the school and thus butts heads with you due to your natural talent. There’s also Ben, a Gryffindor who’s hopelessly cowardly and doesn’t get why he was placed in Gryffindor — just like Neville Longbottom.

It’s a shame that the characters are not particularly original. However, you can influence your character’s personality, as the choices you make in dialogue responses level up your three attributes — courage, empathy, and knowledge. Your attribute statistics has an impact on the future dialogue or action options available to you. For example, high knowledge lets you choose a witty comeback as opposed to a confrontation. 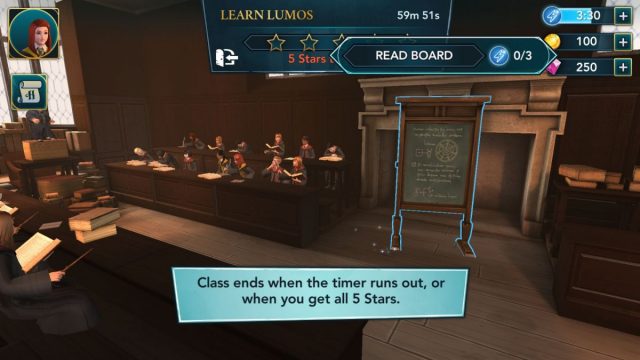 As for gameplay, the story progresses in a very streamlined manner, going chapter by chapter, year by year. In each chapter, you’re required to complete main story quests and side quests, as well as attend and pass classes.

Classrooms and locations look just like they do in the movies. You learn spells in Charms class with Professor Flitwick such as Lumos and Alohomora, a Cure for Boils in Snape’s Potions class, and Flying Lessons with Madame Hooch.

The classes themselves are a rather dull affair. There’s a time limit, and within that time you need to fill up the bar to earn stars. To do so, it’s basically tapping away at the screen, spending Energy which recharges at a rate of roughly 1 per 4-5 minutes.

For most classes, you have the option of selecting a 1 hour, 3 hour, or 8 hour time limit to get all the stars, with longer class times rewarding you with more coins and XP. If you fail to fill up the bar within the time limit, you won’t pass the class and you’ll need to do it over again.

There’s is literally no difficulty at all to the classes, and the only change as you move up the years is that it takes more Energy to finish the classes. Just switch off your brain, and tap away. 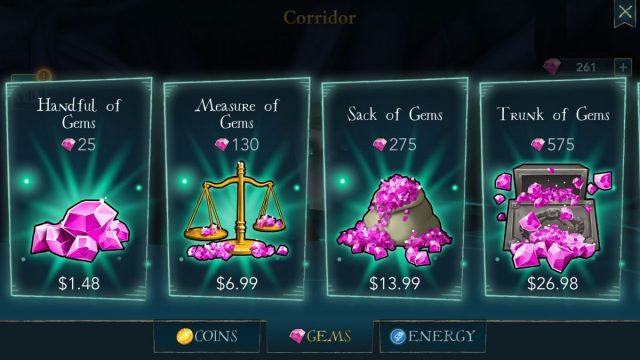 And here comes what we all knew was coming, microtransactions. Want more energy to finish the class right now? You have to pay with gems, which you earn a small amount of when completing quests or levelling up. The faster method, and the method Jam City certainly hopes you choose, is to buy gems with real money. You need at least 20 Energy to complete a class, and 20 Energy costs 60 Gems, which is around $3.50.

There’s also another currency, coins, which you can also purchase with real money, and will get you in-game cosmetics such as different outfits or hairstyles.

Another classic activity in Hogwarts is duelling, and in Hogwarts Mystery, that mainly involves a guessing game of what your opponent does, much like scissors paper stone. 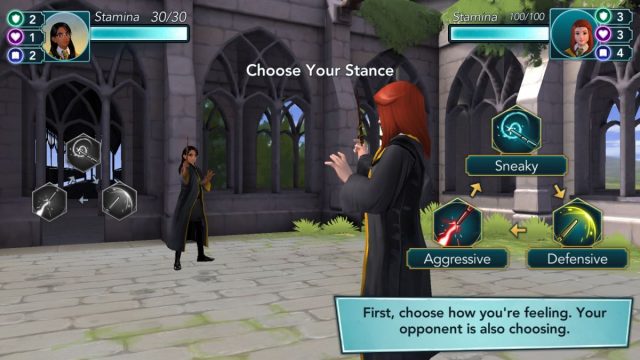 Because of the limited Energy and lack of variety in gameplay, completing quests sometimes feel like a chore. Get a notification that your energy is full, open game, tap, tap, tap.

If you’re looking for an easy, lighthearted Potter-themed mobile game, then Hogwarts Mystery is fantastic for the casual Potter fan, after all it is free, and you can easily get hooked on completing quests and finishing the story.

The graphics are fine, and isn’t too demanding on your phone battery, but look elsewhere if you want a game to accompany you on your commute. Without purchasing gems, using up your Energy each time you open the game keeps you occupied for like 5 minutes, before you run out of resources or need to wait before the next quest unlocks. Since it lacks compelling characters and engaging gameplay, things can get dull after a while, as the story progress rather slowly.

Good enough for the only Harry Potter role-playing mobile game right now, but it does not quite satiate our desire for a full PC or console game one day, one with the freedom to roam the halls of Hogwarts and forge our own magical path. 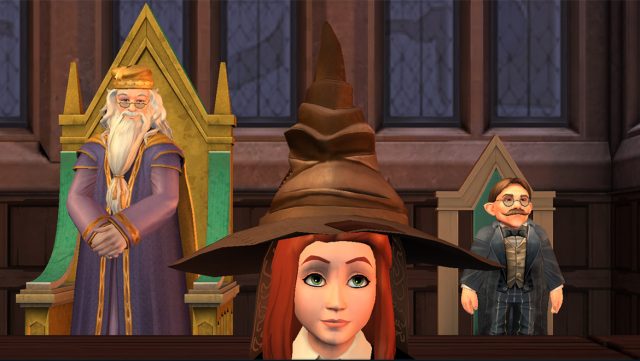