The latest adventures of Kait, JD, and the rest of the Gears 5 crew feels like a homecoming of sorts. Developers The Coalition, who was also behind Gears of War 4, has managed to create the purest form of the type of third-person shooter loop that the series is well-known for, and builds upon it in ways that were pleasantly unexpected.

This is wonderfully evident in the 12 hours or so of the campaign, even though outside of that, there are definite rough edges that could use a Lancer or two to polish them off.

Underneath the plot and new additions to Gears 5 lies a tried and tested foundation that remain ever solid in this new entry. The combat remains one of the best third-person shooter experiences you can have, even if the intensity seems to be lessened this time around. Whether you are a veteran COG or a new soldier jumping in, the visceral nature of Gears 5 never seems to get old.

Adding Jack the robot spices things up even more with ultimate abilities. It allows the more adventurous players to explore previously impossible possibilities during firefights. A particular ability, Cloak, is literal paradise if you want to go on a killing spree while undetected.

You can even upgrade the ability to keep you cloaked even while shooting, all it takes is to complete a chain of side quests.

While these side quests are neither mandatory nor particularly interesting, the benefits far outweigh the hassle, especially on harder difficulties where Jack becomes almost indispensable. The likes of Stim, Flash, Hijack, Shock Trap, and more become more amazing as you upgrade them, and the potential for experimentation lends a new dimension to the already solid Gears 5 combat.

It all helps make the adventure through Sera as both JD and more importantly, Kait Diaz, is such an engrossing and enjoyable romp. Not only are there impressive set-pieces in combat, the story with Kait as the headliner is simply a masterstroke.

She is a thoroughly realised protagonist, with her motivations and conflict laid bare for the players to experience on her journey. There is plenty at stake here for Kait and her connection to the Locusts, and every development keeps you on your toes and eager for more, all the way till the end. The investment and concern for a Gears character have never been greater since the likes of Marcus and Dom in the series’ earlier days.

Gears 5, perhaps more than any other game in the series, takes the issues of grief, trauma, war and peel back the layers. It is a poignant take that the medium rarely ventures into, and through the eyes of Kiat does it become even more nuanced, especially for fans of the series.

Even the colours present in Gears 5’s semi-open worlds seem to be a commentary on the brutality of war and its effects on the environment. A frozen wasteland and a red desert punctuated by relics of the past, barely holding on. The expansive environments make for great backdrops, but there is sadly little incentive to explore the areas via a skiff.

Though it helps break up the constant action and give you a chance to listen in on the squad, you are only really trying to get to your next objective on the map. A wasted opportunity, to say the least.

Outside of the campaign is where issues start to crop up. Versus mode is back with its classic 5v5 combat, and continues to be the mainstay for purists to duke it out, especially in Ranked Versus. At least Arcade Versus is doing something different, with character-specific abilities and loadouts that are essential to winning.

Skulls are earned that can then be spent on weapons that are unique to certain characters, and naturally, there will always be a few outstanding choices, which in turn makes Arcade Versus less of a fun time due to the meta. It is still fun, though, and definitely less intimidating than Ranked.

Horde mode is also present, albeit with new additions and a few annoying changes. Should you ever encounter a disconnected teammate, bots will now fill in, giving you at least a shot at survival. There is also a new Power Tap system, which when captured/defended, provides more power to aid in your battles, a boon for those playing more aggressively.

The new kid on the block, Escape, has been touted as a challenging new addition to the Gears family, and unfortunately, the challenge lies in liking it as a mode in general. A team of three COGs have to try to escape from a Swarm hive while managing resources, which sounds like a tense, exciting time, but most certainly is not.

The uninspired characters, the potential of selfish teammates, or just trolls in general, can really sour the experience of an already subpar mode. Walk away if you do not have suitable partners to team up with.

Gears 5 also introduces a battle pass, the Tour of Duty, which unlocks cosmetics as you complete objectives in the various modes. Every 24 hours, a set of three objectives will be available, and completing them earns you stars which goes towards unlocking the next tier of rewards.

It all seems fine and dandy, until you remember that Gears 5 is a AAA, full-priced title (or free on Game Pass). Gating progression behind a daily refresh is simply astounding, and it will likely turn off even the most ardent of Gears fans from jumping back in every day.

Playing either of the three modes will also earn you Supply, which grants a random customisation item when the gauge is filled. There are no pay-to-win items, and Skills Cards, which are used to boost abilities in Horde and Escape, can only be earned through levelling up or Scrap, another virtual currency obtained when breaking down duplicates.

What makes the system worse is that cosmetic unlocks are disappointing. Be it the sprays or banners, familiar character skins, emotes or executions, there really is not something special that awaits your efforts. In a frantic game like Gears 5, it is unlikely anyone will have the time to appreciate the new blood spray you just equipped.

Yes, it is not loot boxes like Gears 4, but it remains underwhelming.

There is little doubt that the star of Gears 5 is the campaign, from its story to the new abilities, and the roleplaying elements and side quests, all builds upon the Gears of War foundation and evolves into something really impressive.

The more lacklustre Escape mode, and the generally better Horde and Versus does not really take away from the experience, although the battle pass needs to be improved, and fast.

The Coalition has added their own gears (ahem) into the inner workings of one of Xbox’s greatest series, and it is heartening to see that innovation is still possible within the confines of established rules. Gears 5 might not be everyone’s cup of tea, but it sure tastes good for the rest of us.

Gears 5 gives us a robust campaign worth reliving, a familiar Versus and Horde experience, but a poor progression system takes off some of the gloss, even with the new Escape mode. 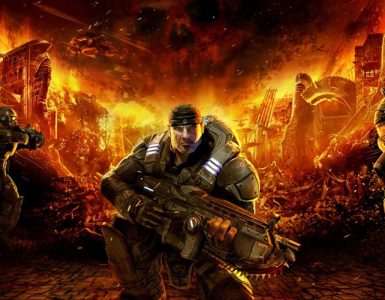 Time to bring the fight to the film industry.