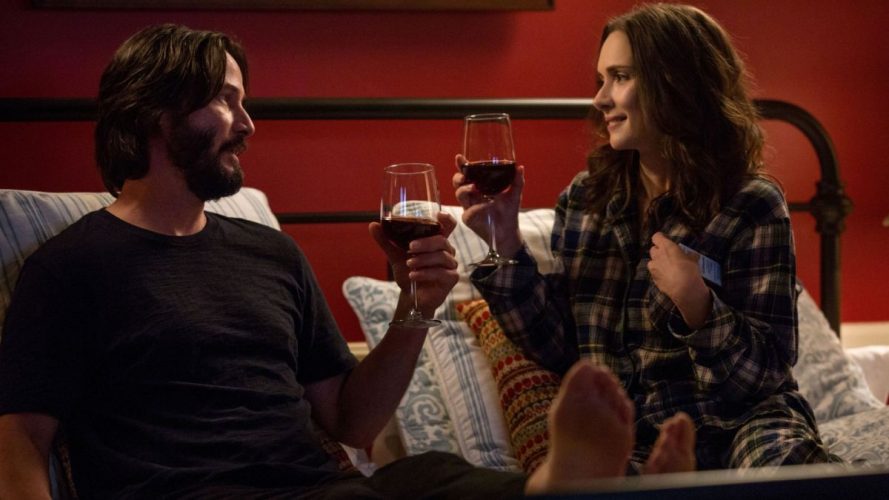 First, let’s cut straight to the chase, and talk about the excessive intercourse in this movie.

Man, these two weirdos here in this anti-lovey dovey romantic comedy – Frank (Keanu Reeves) and Lindsay (Winona Ryder) – really love to talk and talk, and then talk some more.

They argue and debate in lines so long and comically unwieldy, that you’ll be amazed there isn’t a snake wrangler listed in the show’s closing credits.

This is very funny if you’re a relationship freak blessed with an anti-social brain, and two unstoppable mouths.

“You don’t have to talk. Honestly, I’d be happier if you didn’t,” persistently pessimistic sad sack Lindsay tells surly, instantly dislikeable Frank, when they first bump into each other in some sort of prickly pre-destiny at an airport boarding queue. 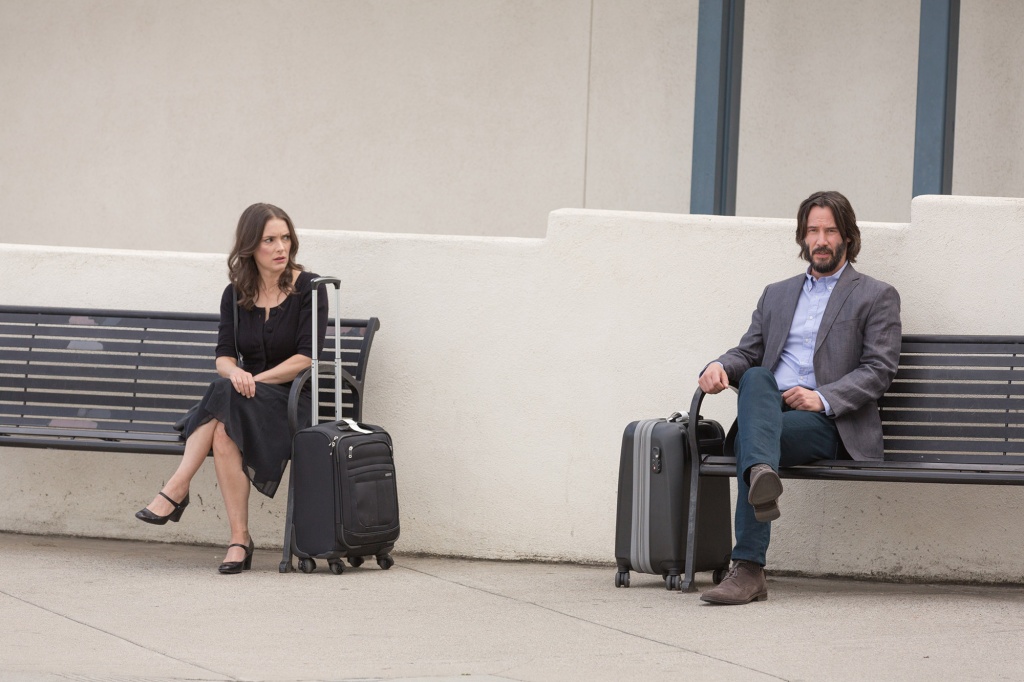 They are enroute to a wedding in a small Californian vineyard town which they’re both slated to attend. Lindsay is the groom’s ex-fiance seeking self-inflicted closure, while Frank is his uncaring half-brother, and the two of them are cosmically paired together in common aversion towards the detested groom.

Of course, you know what a wedding truly is, right? It’s that happy ritual of fake smiles and false pretences which makes single, gloomy misfits like Frank and Lindsay even more unhappy.

Now, that earlier line uttered by Lindsay about curbing speech is really a bright shining lie. Throughout this entire movie, no one else actually emits a whiff of dialogue except our oddly odd couple, although there are many other characters around them.

Oh, apart from a growling mountain lion whose sudden deadly appearance in an incongruously sunny vineyard field leads to a hilarious sex-after-near-death scene in the great outdoors, which would make you giggle with the taste of grass in your mouth or, as Lindsay grumbles on, grass in another vital orifice of her body.

“I’m sure my womb is hostile,” she assures Frank when the prospect of an unwanted pregnancy is summarily discussed during coitus. 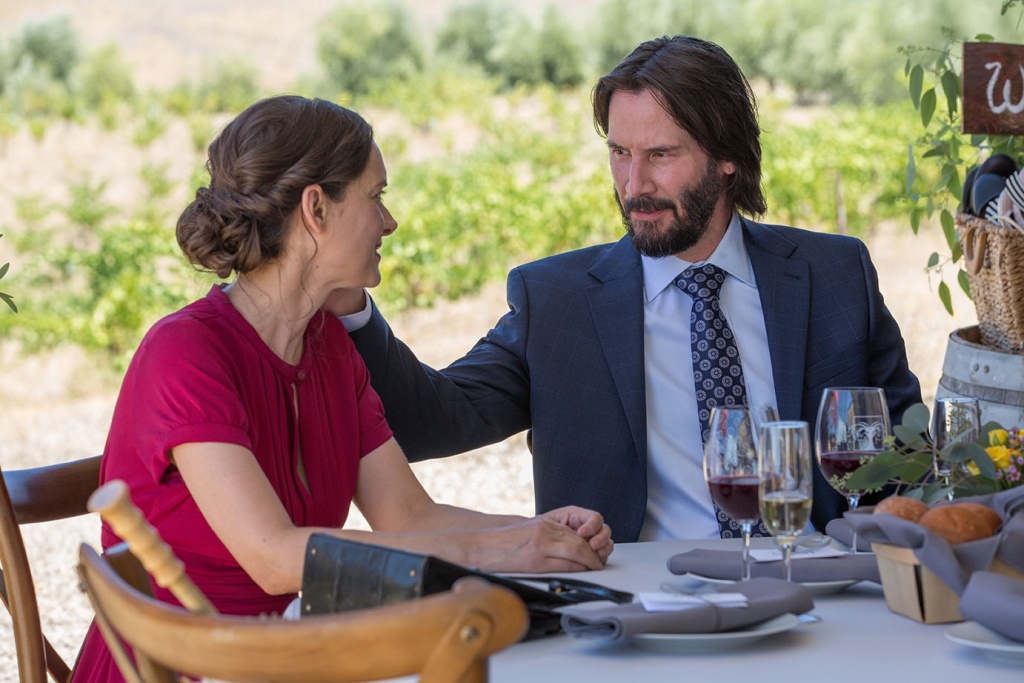 If you’re into the great weird sport of yakking and yakking to a complete stranger about life, love, death, foot massage and stealing toiletries from hotel rooms, then this comedy about cynical grown-ups basking in the joyful positives of absolute negativism is so perfect for you.

The duo dislike each other and keep putting each other down – she calls him a monkey, he says she’s headed for a mental institution. Yet stranded together in inescapable adjoining hotel rooms for their weekend escapade, they become unlikely allies in that great bile-filled tradition of dissing other wedding guests together, heckling old movies and mocking the niceties of life in general.

Lindsay, despite her adoration for self pain, still believes in the miracle of romance. Frank, meanwhile, spouts comeback retorts as though he’s a philosopher of meta apathy – “I believe that there’s nobody for anyone,” he asserts his theory of negativity.

Some American critics have dismissed the fattened narcissistic verbosity of Destination Wedding as contrived and torturous. But speaking – no pun intended – strictly as a miserably skeptical person willing to venture into any wedding as long as it isn’t mine, I had a really cosy fun time here.

I actually think this comedy makes the best use of scary sound since a James Wan horror flick, due to the strange emissions Loony Lindsay and Freaky Frank habitually make.

She tries to expire her heated breath onto plants to possibly warm them, while he makes peculiar grunts presumably for some kind of self-exorcism.

It’s exactly my longheld evil wish come true of infecting the optimism of Before Sunrise with a Woody Allen-esque mood and then clobbering the whole thing with some sort of nutty He-Said-She-Said fatalism.

Hey, this is 2018, surely you don’t believe in once-upon-a-time garbage, right? 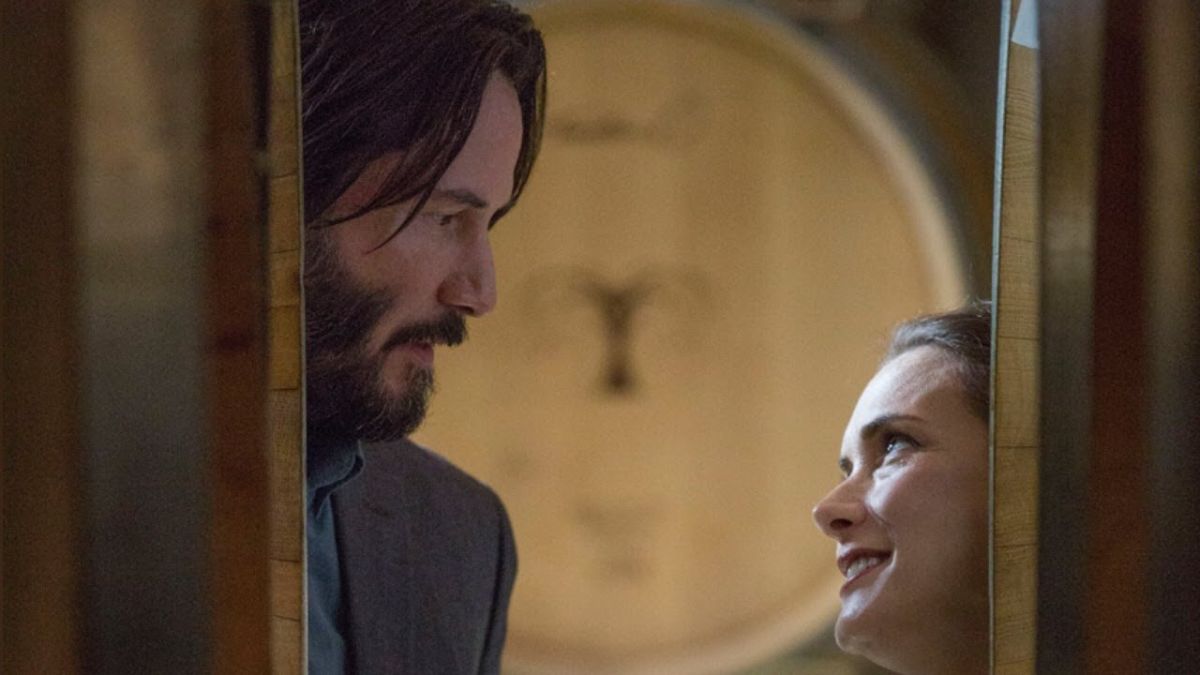 Now, everything conjured up here by writer-director Victor Levin (from TV’s Mad Men and Mad About You) could easily have descended into abject debacle given Reeves’ non-existent acting craft, and Ryder’s aging outsider persona. The funny thing is, Reeves wooden delivery of his ultra long lines actually syncs quite perfectly with Ryder’s overaged oddball hyperdrive.

It must be because this winsome twosome have such great leftover chemistry from 1992’s Bram Stoker’s Dracula that Ryder claims in a recent interview that they were possibly officially married by a real Romanian priest during the filming of that horror movie.

“Do I strike you as someone who has closure?” Ryder’s Lindsay asks in adorably negative riposte here.

No, girl; not with Keanu, please.

In a world filled with kitchy romantic comedies, Destination Wedding shows us that ever weirdos can find companionship. The dialogue can be unwieldy at times, but seeing Keanu and Winona together makes the journey worth it.