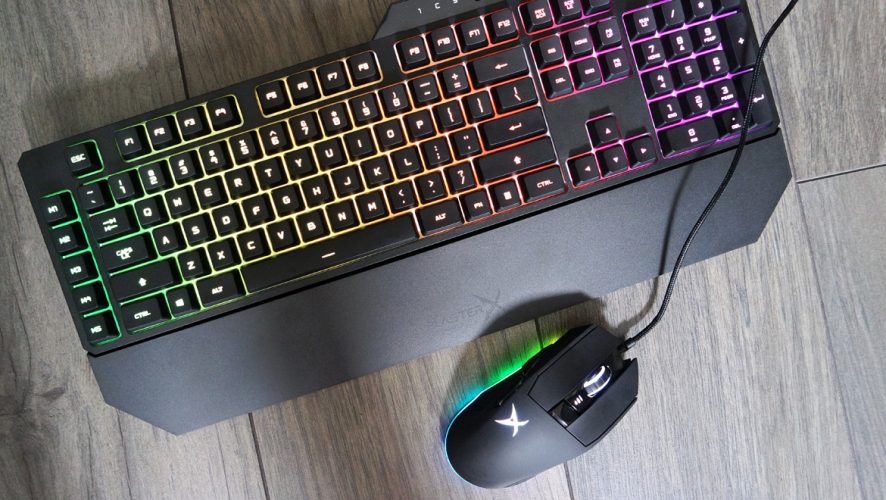 Creative’s catalogue has long revolved around audio products, with speakers, amps, sound cards and headsets dominating its lineup. It did after all start out as a maker of PC audio cards.

But with PC competitors such as Razer, Acer and Asus encroaching upon its territory with their own audio products, it should come to no surprise that Creative isn’t just going to sit quietly in the corner.

So, it’s quite refreshing to hear that they’re taking a crack at the gaming peripherals market. Their first foray includes a keyboard and mouse duo: the Sound BlasterX Siege M04 mouse and Vanguard K08 mechanical keyboard. It isn’t as if this is their first entry into this market, as they have had success with their gaming headphones.

Creative is pitching its peripherals like it does its audio products: heavy on the features and high on the quality, with a sensible price tag. The Vanguard is going at S$269, and the Siege at S$119 — not quite budget, but still reasonable.

Even so, breaking into this niche market is going to be a tall order. It’s thronged with incumbents, from Razer’s formidable arsenal and Logitech’s G series, to smaller lines such as local brand Armaggeddon.

So, how do Creative’s virgin products stack up? The incumbents would be foolish to ignore them.

The Vanguard certainly looks the part of a gaming keyboard. It has a row of five macro keys running down the left side, and individually RGB backlit keys with three levels of brightness. The keyboard also has floating keycaps, and clear, bold legends.

The chassis of the keyboard is plastic, but feels very sturdy. Most of it is a soft matte black, except for a section on the top that houses the media keys, which is glossy. Despite all the additional keys, the layout is compact enough that it does not have an absurdly large desktop footprint — good for gamers with cluttered tables.

It feels like a gaming keyboard too. Creative has developed its own switches with Omron, called PRES (Perceive-React-Execute Switches). These have a 45g actuation force – quite standard for a mechanical keyboard – and a 1.5mm actuation distance. It is a linear switch, so there is no clicky typewriter feeling or noise; instead, it goes straight down until you release or bottom out.

It’s quite hard to describe the feel of a PRES, as it does not behave like any of the popular Cherry MX switches. The switch that it most resembles is actually the Logitech Romer-G, specifically the ones on the G910 Orion Spark. Both of them have a similar resistance and slightly coarse feel, and a small bounce back when you release the key. The PRES switches are slightly stiffer though, and more springy.

Creative has also shaved 0.5mm off the actuation and travel distances. They are now 1.5mm and 3.5mm respectively, versus the usual 2mm and 4mm of most mechanical keyboards. This means a faster execution and reset time, higher APM, and hopefully more heads rolling in-game.

The Vanguard is not just a gaming keyboard, it is also great for media playback. There is a volume scroll wheel on the right side, and control keys at the top that can work with Spotify or whatever media player you’re using.

It also has USB passthrough, which is handy if your USB ports are inconveniently located at the back of your PC or in a hard to reach location. The Vanguard’s cable has two heads, and if you plug in the one labeled passthrough, you’ll be able to use the USB port at the top of the keyboard for reading data or connecting another device.

The Vanguard even ships with a detachable wrist rest, for greater comfort over long hours of gaming.

The Siege is a comfortable mouse with a long, slim profile, and a glorious array of lights.

Many gaming brands just light the logo on their mouse and call it a day. The Siege has full RGB lighting on its logo and scroll wheel, and three lines of white light as a DPI indicator.

Best of all, the Siege has a ring of light that runs all the way around the bottom of the mouse. By default, the ring is programmed to cycle through multicolours, so it looks like a rainbow chasing itself around the strip. It also reacts when you press the thumb button (it turns white), or the DPI button (it turns yellow, blue or green, depending on the level).

Hardware wise, the Siege has an IR LED sensor that’s capable of 12,000 DPI, and seven programmable mouse buttons, including three arrayed around the left grip. The rubber grips on the left and right and patterned for greater control, and the mouse is overall very responsive and maneuverable.

In the US, you can get a Sound BlasterX Weapons Crate for US$300 (S$434), which comprises the Vanguard, Siege and a mouse pad, in a hard carrying case. In Singapore though, that option is sadly unavailable. Still, you can pick up the individual items at sg.creative.com.

The K80 video lighting kit packs serious power, but the overall build quality leaves much to be desired.