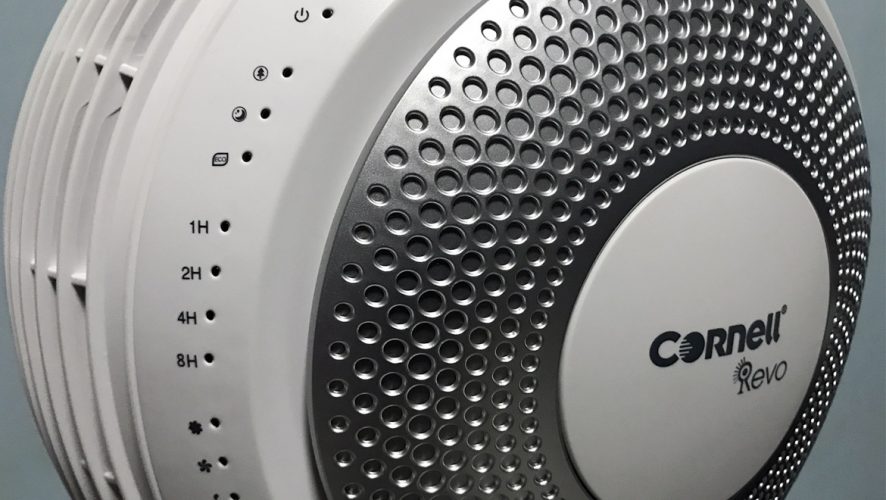 These days, adding a chip into any gadget automatically makes it a smart device, but not every smart device is an intelligent one.

That Internet connected wine bottle to prevent counterfeit bottles? That vacuum cleaner that is set on a timer to clean the house, but can also smear dirt all over? The US$400 cold press juicer that is not necessary, since users can also use their hands?

Home appliance maker Cornell recently rolled out a fan that comes with some smarts and despite some initial eye roll on my part, this is a smart fan simply because there is some intelligence to its features, even if it takes a while to get used to it. 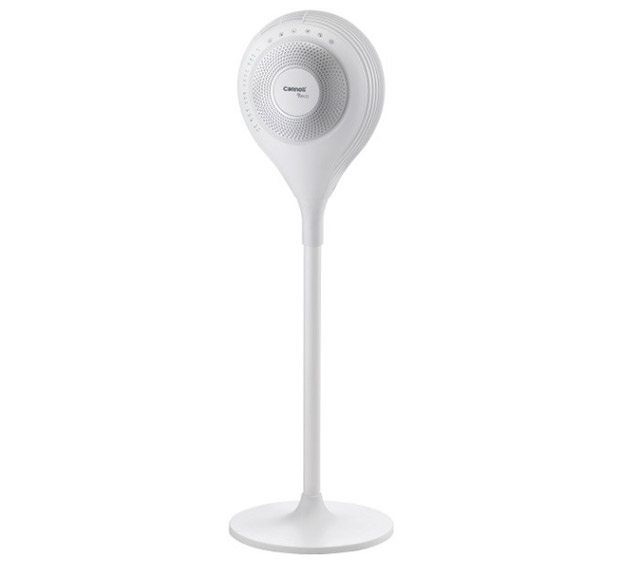 So what makes it smart? For one thing, it uses a sensor to detect the people in the room, and will oscillate to between where the person standing on the extreme left and right in a room are located. While most fans oscillate on a fixed path, there are times where the turns go beyond where the stream of air is needed. How many of us have ever sat at the dining table, and have the fan oscillate and cover the whole table, when there are actually only 3 people seated?

The other one is temperature control. There are three speed settings, which is normal, but the Rev also toggles its speed depending on the ambient temperature. The fan switches to low speed when the temperature falls under 25 degrees Celsius and below, and goes to medium speed if the temperature is between 25 to 29 degrees. If the temperature rises, the fan speed stays on high. 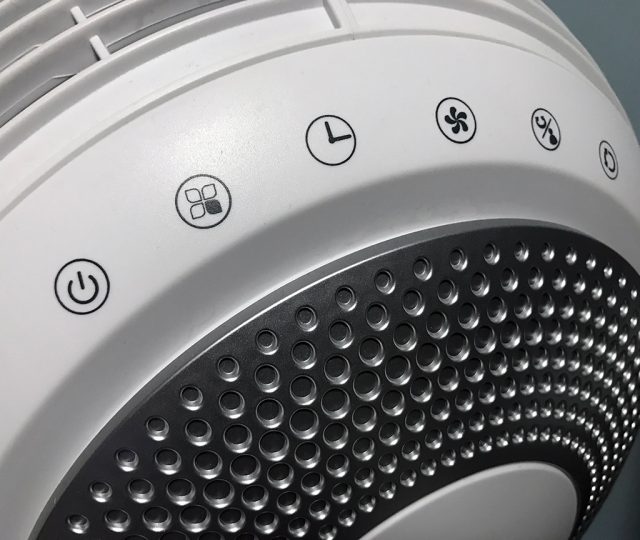 Now this won’t matter much if the fan is placed in the living room, in a country where the heat and humidity is a constant. But if you turn on the air conditioning, there is no need to tweak the fan’s speed, as it will automatically rise and lower the room’s temperature based on these settings.

So how does the fan’s people/body sensor work? This is not a traditional fan, nor is it the bladeless type fan that Dyson recently pioneered. Shaped like a lollipop, the fan has a circular, dome shaped top. But the air does not come from the larger, flat side of the fan, but from one half of the edge. 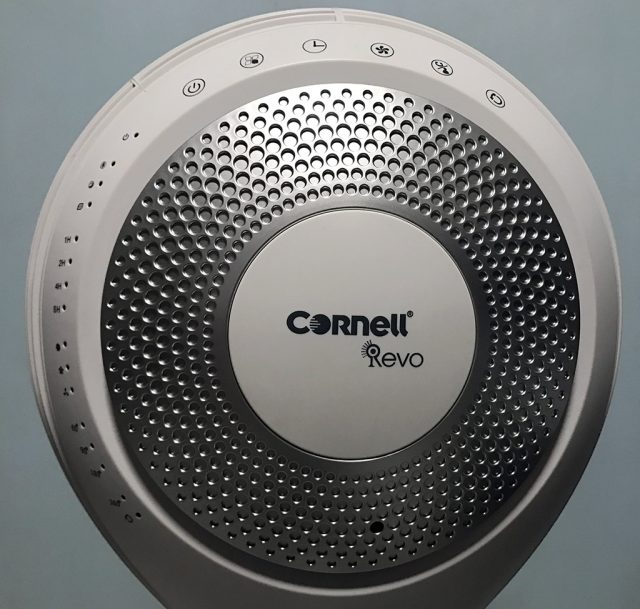 The air intake is actually on one side of the larger side, and the entire dome rotates 360 degrees. Here’s how it work. When the detection button is selected, the dome will make a 360 turn, to determine where the warm bodies are. From the next rotation onwards, the dome will only oscillate between the most extreme position of the warm bodies it detects. If both bodies are close together, it can easily oscillate between two people, at a small 30 degree angle. If there are more than 3 people, it can move between the person on the far left and on the far right.

So what happens when someone leaves? Simply press the detection button and the process repeats itself. The issue here is the time it takes for the fan to do a complete revolution, and everyone has to stay in their spot, or it will throw the sensors. 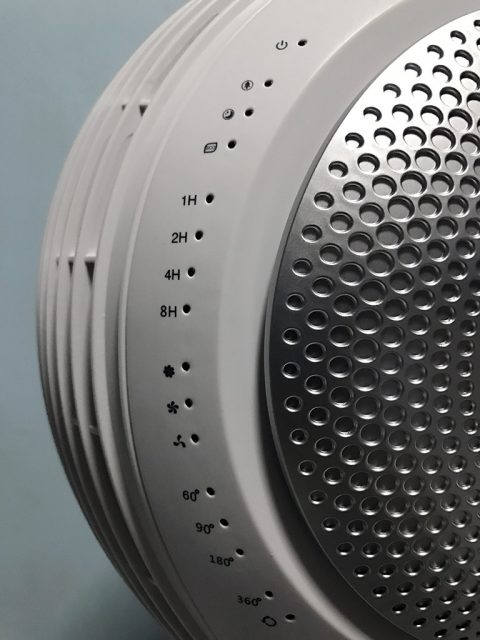 Another surprise with the fan is that it is relatively short, only hitting up to my chest level. So what happens when you want to point the fan downwards or upwards? Unlike a traditional fan where users can point the fan upwards, the dome is fixed in the sense that users cannot move it upwards or downwards manually. Instead, the fan blades within are like the ones in the aircon – users can opt to move it up or down, to direct the flow of air using the touchscreen buttons.

In a way, this fan covers just about every direction left and right, up and down.

But because of its versatility, the controls take some getting used to. As the air intake is on one side of the large surface, the touch controls are located on the other side. There’s a remote control, but the settings are only displayed on the fan itself. So if you set the fan on medium blast, you won’t know it unless you look at the lights on the fan, which will be lighted beside the Medium mode, or if you’re good enough to recognise the sound of a medium blast of wind. 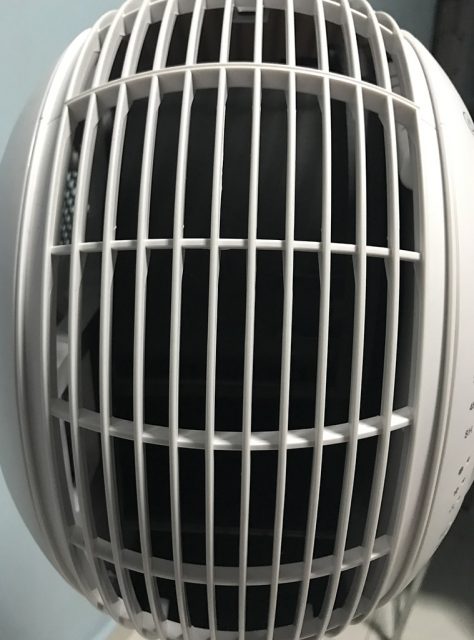 Because the fan is new, the controls take some used to as well, so don’t expect to master it right away. The fan’s airflow mode is also toggle based, so you have to cycle through Low, Medium and High fan mode each time if you want to switch speeds.

Right now, I am using the fan in a room with 2 people and at night, when no one moves positions, the fan works wonderfully, covering only the air between both individuals lying in bed, and nowhere else.

When I move it to the living room, it’s a great companion when watching movies, or when binging on TV shows on Netflix.

Things get more complicated when I have guests around, as folks tend to move around and not stay in one spot. Then again, a normal fan would not have fared better either. 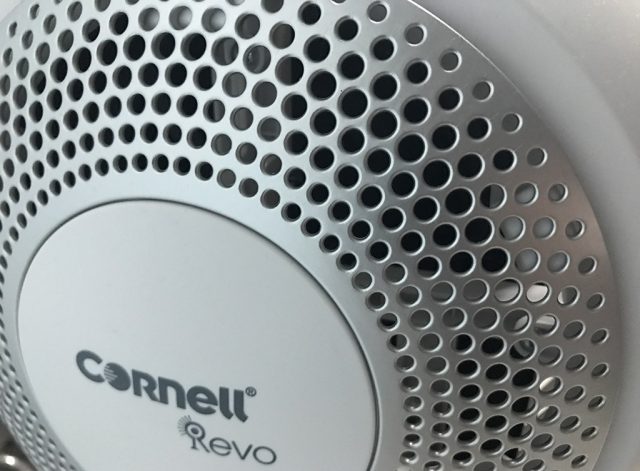 At S$199, the Cornell Smart Fan is much pricier than your average stand fan. But when used in most scenarios around the home, the precision that it offers has no equal.