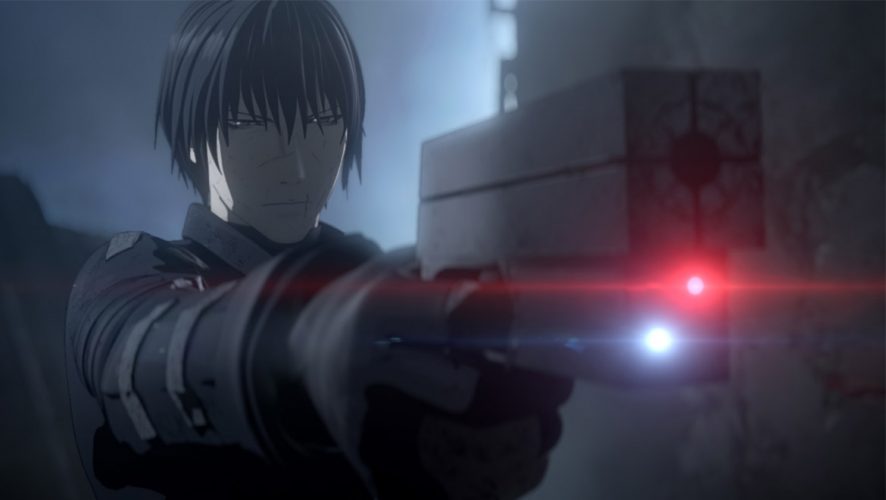 The brainchild of noted creator Tsutomu Nihei, BLAME! (pronounced “blam”) is a sci-fi, cyberpunk manga masterpiece that has been waiting for a proper anime adaptation for a long, long time – 20 years to be exact. And finally, Netflix has stepped up to the plate with an updated animated movie.

Updated and not new because the manga began its serialization in 1998 and ended its 10 volume run 5 years later, in 2003. It would eventually spawn various one shot and spin-off mangas, and a six webisode mini-run.

The story follows Killy, a (mostly) silent hero as he roams the Megastructure looking for humans with the Net Terminal Gene, to restore man as the rightful masters of this futuristic world. However, the gene is considered to be nonexistent and the Megastructure is “protected” by robotic Safeguards that systematically eradicate humans when they identify the gene in them. Killy the Wanderer eventually comes across a small village, meets Cibo (a female cyborg on a mission) and saves the day, for now.

While the webisodes were done in traditional 2D animation, the latest rendition of BLAME! has taken a more modern approach – 3D rendered as 2D cell shaded animation. Unfortunately, it has the strange blend of depth and flatness which plagues most anime done in this style. Still, it doesn’t distract too much from the overall viewing. It is similar to Nihei’s previously animated work Knights of Sidonia, and for good reason, as they both use the same production house and director.

The previous webisodes’ animation were much closer to the source material in terms of style. It was flat (2D), dark and raw, while the current remake has seen some small changes to the character designs. Someone felt the necessity to clean up the aesthetics, giving everything a sleeker look with cleaner lines and more slightly more defined shapes. Nihei himself led the movie’s creative direction so the set, character design and dialogue is basically an improved version of the the manga, depending on which way you like the original.

Polygon Pictures has done an amazing job capturing the creepiness of the Exterminators/Safeguards. Apart from the design and texture of the robots, the animation for their attack mode is especially exciting. Their speed crawl is reminiscent of Reagan from The Exorcist. The combination of altered human anatomy, and jerky yet fast and aggressive movements, really makes them quite scary, and creates a sense of tension when you see them charging towards the characters.

Given that they was also responsible for Knights of Sidonia, Tron: Uprising and Transformers: Prime, anime fans will probably find the animation style and texture very familiar.

It’s obvious that director Hiroyuki Seshita has used the experience from his previous works such as AJIN: Demi-Human and Knights of Sidonia, to develop the style of action in BLAME!’s action sequences. They are tight, driven and exciting, and everything happens quickly, but not so fast that you can’t catch up with what’s going on. And like the manga, it’s got minimal dialogue.

The story driven parts have a good flow and offer the viewer more direction than the webisodes did The webisodes tended to let the visuals speak for themselves and allowed for a lot of open interpretations. But then again, the webisodes were created to be complementary the series, and not a part of it.

The movie doesn’t attempt to compress the entirety of BLAME! in its 110 minute runtime, which is a really great idea. If memory serves, this movie serves as a prequel, and covers the events of the manga’s first year or so. But the Netflix version is very different from the manga, as the timeline is different.

This version covers the origin of the android Cibo. Killy discovers, rescues  and lugs around her broken form for most of the show as they try to find “the one”. She only gets her full form towards the end.

Despite the simple storyline it manages to keep your attention and entertain you, while giving you a grasp of the tale that Nihei is trying to tell.

Because it’s a standalone story, BLAME! has the potential to become a multi-part movie series, much like Neon Genesis Evangelion. Compared to the manga, the story is easier to digest and makes a great entry point for new viewers since you don’t need to know anything about the series to get it.

The movie also boasts a stellar cast including Takahiro Sakurai who plays Killy. Sakurai is famous for his ikemen (handsome guy) and anti-hero roles. His Killy is cool, restrained and stoic – pretty much how you’d imagine him to be. But Sakurai also brings a level of humanity to Killy through the subtleties of intonation. Coincidentally (or not) Sakurai was also part of the Knights of Sidonia team together with Nihei and Seshita.

One letdown is the movie’s soundtrack, which is unremarkable and largely forgettable which is unfortunate. There is a short recurring theme that plays throughout the movie but otherwise there’s nothing too iconic about any of the sounds.

BLAME! is a great series for sci-fi lovers. If you enjoyed the Ghost in the Shell series by Shirow Masamune, you’ll definitely enjoy BLAME! as well. It’s premise is not as deep as Neon Genesis Evangelion or Ghost in the Shell, but it’s dark and unique enough to keep you wanting more after the movie is over.

BLAME! is a Netflix Original slated for release on May 20th, so be sure to add it to your list if you like what you see here. A decent adaption of the manga, BLAME! is a watchable sci-fi anime movie that is like a diet version of Ghost in the Shell.