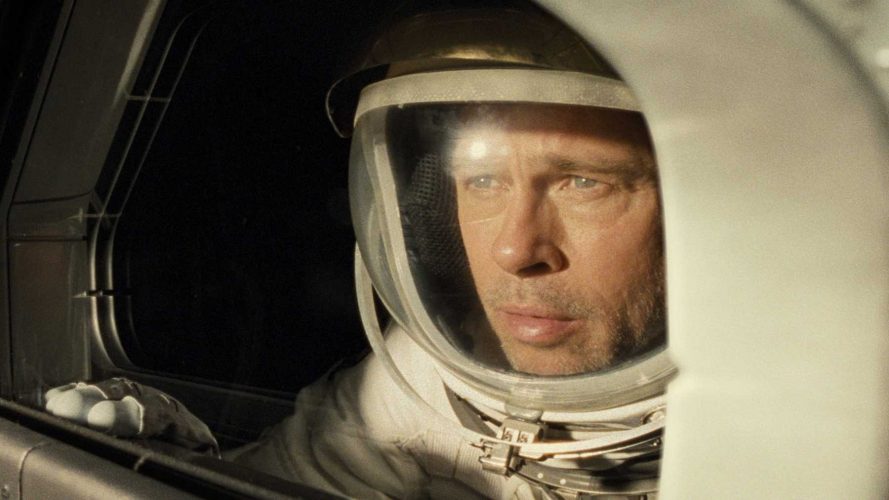 First Man. Gravity. The Martian – you would think that after being bombarded by a slew of space flicks in the past five years alone, audiences and filmmakers have become disenchanted with the premise. However, James Gray’s Ad Astra is a visual masterpiece, and when complemented by Brad Pitt’s impeccable acting, forms a thoughtfulness narrative that provokes one’s own introspection.

It is clear that while Ad Astra retains its art film charm, director and co-writer James Gray attempts to cater to mainstream audiences by peppering the film with dynamic action scenes. Even so, you can expect many to either love or hate it.

The movie is set in the near future with a commercialised space travel programme, but where the same problems that plague humanity’s quest for peace are now duplicated over at the other colonised planets. More importantly, a phenomenon referred to as The Surge is disrupting Earth’s electrical grids, causing disasters across the globe.

Roy McBride Brad Pitt), a veteran astronaut discovers that his father, Clifford McBride (Tommy Lee Jones) is still alive after disappearing roughly 20 years ago. Clifford was apart of the Lima Project, a deep space exploration into the existence of extraterrestrial life that travelled and disappeared somewhere in Neptune’s orbit.

According to the Space Command, they believe the Lima Project is causing The Surge and thus, Roy McBride sets off on a semi search-and-rescue mission to the far end of our solar system, in the hopes of communicating with his father and saving humankind.

Now it’s no surprise that the movie is so beautifully shot, with Hoyte van Hoytema as the director of cinematography. Probably best known for his work in the Her, Interstellar and Dunkirk, the stunning visuals and exquisite camerawork captures the viewer and successful invokes the emotions intended in each scene.

The juxtaposition of light and dark elements throughout the film effectively portray space as a pitch-black and seemingly endless abyss while disorienting the audience in order to immerse them into Roy’s narrative. Ironically, Roy’s narrative is one of the reasons these brilliant shots are ruined.

Throughout the picture, Roy provides a voiceover in some of the most contemplative scenes. These monotonous monologues over-explain Roy’s thought process as if the audience is incapable of developing their own thoughts on the matter. Either depicted as off-screen voiceovers or mandatory psychological assessments, the redundant droning result in the movie borders on cheesy.

However, as Roy spends a majority of his time alone, the explanations can be seen as  an attempt to fill the silence. Roy is a guarded individual and locks his emotions away deep within him, keeping him composed in the face of danger and making his actions and responses calculated.

Marring the film’s beauty are also the action/horror scenes, that seem slightly out of place. Make no mistake – the scenes themselves are breathtaking as Gray intended for the movie to be the most realistic space film by far. From the use of a first-person perspective to the sounds of rumbling created by an occasional explosion, the movie keeps you on the edge of your seat and the level of immersion is remarkable. Think a mix of 2001: A Space Odyssey meets Solaris by way of Armageddon and Star Trek – the film seems self-aware enough to attempt to homage those movies without aping them, though the end result is a mish-mash of references.

Brad Pitt does an outstanding job with a character that supposedly has the emotional range of a chicken nugget. He portrays the steely and subtle character with a quiet authority. As the emotional pinnacle of the film approaches, he displays a believable level of restraint and chaos, thankfully avoiding the superfluous emotional breakdown like in Interstellar.

Although there are a few supporting characters, none of them stick around long enough, causing Brad to shoulder the bulk of the movie’s progression. While co-stars Tommy Lee Jones, Donald Sutherland and Ruth Negga definitely contribute substantially to the plot. It is just a shame to see a potentially intriguing partnership brewing and to have it ripped away before it gets interesting. Except for Liv Tyler, that was just a waste of an extended cameo.

Regardless, the truly impactful moments are the ones Roy McBride spends alone or detached from his social environment. Without giving away too much, there is a confusing sequence of overlapping scenes that twist the chronological order of the movie. This gives it the illusion of not only time blurring as he travels through space but emphasises the obsessive thoughts that take control of the human mind. It highlights the dangers of solitary confinement but somehow Roy manages to emerge seemingly unaffected.

As Roy faces his father in the final scenes of the movie, it calls to question the extent of parent-child relationships as well as the measures people will go to escape their troubles. The interaction at face value is somewhat emotionally distant but as we all carry our own burdens regarding filial piety, audiences are sure to project their own doubts and understanding.

For example, for some, it might cause viewers to question the obligatory and arbitrary love between parent and child. Nevertheless, it is a heart-wrenching moment of a man facing delusion of the past and the burden of truth.

Unfortunately, there were a couple of scenes that broke the intensity of the movie due to how silly they seemed. It is possible that the amusing actions by the actors actually carry some scientific logic and reasoning behind them, but as we cannot all be astrophysicists or astronauts, they might break the spell of the deeply somber tone.

Overall, Ad Astra is visually appealing and worthy of all the praise it has received thus far. The cast did a stupendous job working with characters that may have otherwise been entirely lacklustre and themes and thought-provoking nature of the film is sure to be the centre of many conversations in the weeks to come.

Ad Astra is a wonderfully thoughtful movie with beautiful cinematography that captures the vastness of outer space. However, some of the components subdue the impact of the film.