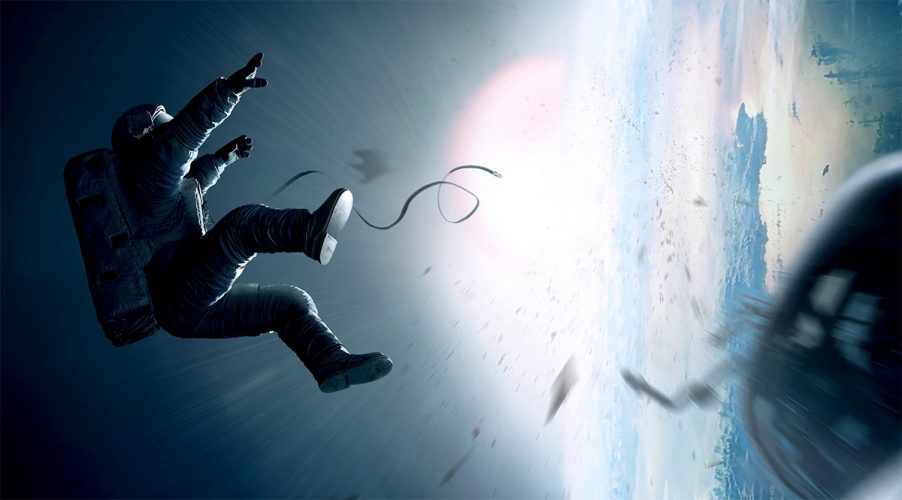 Alfonso Cuaron first caught the eye of Hollywood with his visually arresting presentations of Harry Potter and the Prisoner of Azkaban, and the narratively thin but stunning imagery and action set pieces of Children of Men.

By the time of this review, Gravity has become the sleeper hit of the year, winning the approval of both audiences and critics alike. It also helps when you get a sterling endorsement by none other than king of the world James Cameron himself.

But put aside the “to be expected” requisites of a space film of its ilk. And you’ll start to see why this film resonates so soundly with the likes of James Cameron.

Yes, Gravity is astoundingly stunning in its cinematography and presentation. Alfonso seems to have cornered the market on the “long uninterrupted choreographed take that is so frantic and frenzied, it couldn’t possibly be unreal, because of so much happening in the one shot, could it?” school of cinematic thought. A lot of the film’s presentation is made to disorient and relay the feeling of impending chaos and potential for calamity. Some shots are long and unbroken, and the lack of anticipated camera cuts lends an immersive immediacy to large portions of the story.

Running a taut 90 minutes, Gravity starts off with a routine mission in which Sandra Bullock plays a science engineer, installing a piece of hardware on a satellite that’s meant to do something or other. It is really unimportant thingymabob kind of stuff. 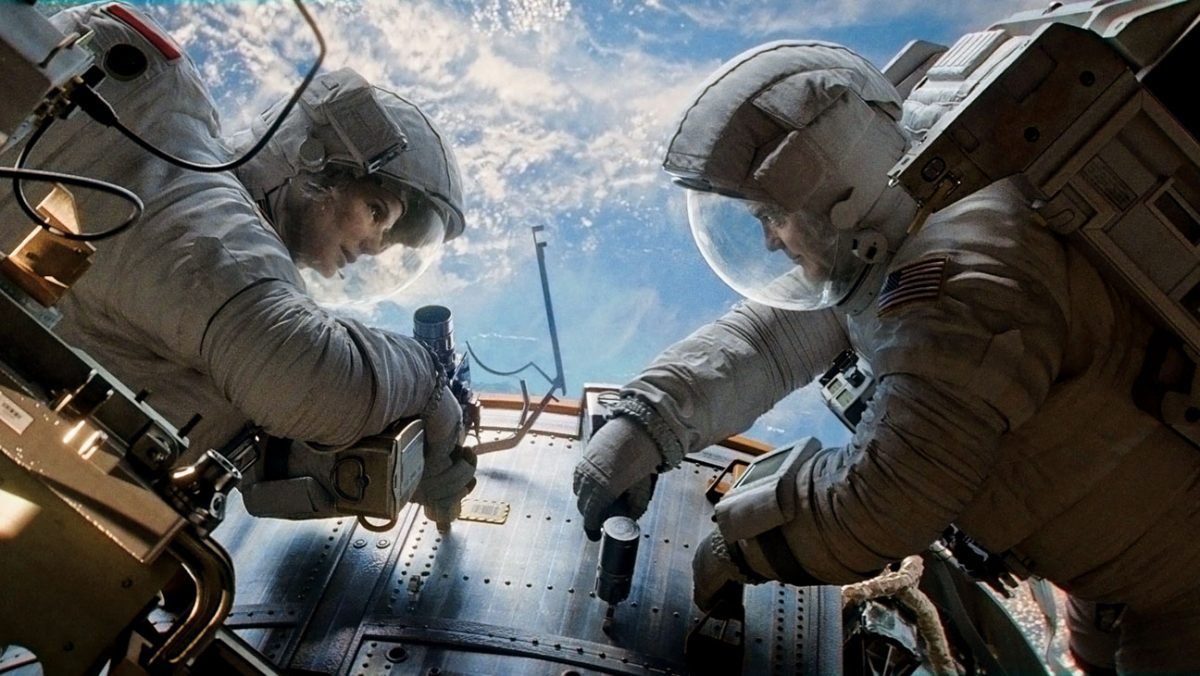 George Clooney essentially plays himself channelling every American hero astronaut ever and Sandra Bullock portrays a somewhat pragmatic and cynical engineer struggling to cope with the challenges that follow given her already questionable state of mind coming into the mission before hand.

While Gravity is not without its mesmerising technical artistry in showing the breathtaking visuals of space just outside planet earth, the film is in many ways exercising the structural nuance of an independent presentation.

Where another big budget director might utilise epic consumption of sound effects to enhance the destruction on screen, Gravity does the reverse, trying to bed the film in sort of a narrative pseudo reality where anything happening outside a spacecraft is cloaked in the alien veil of cloying silence with often only the sounds of laboured in suit breathing, or voice over communications to ground control punctuating the abundant lack of big action sound effect gusto.

It works in large parts and they approach of zigging where other films might zag is a refreshing choice when it happens, although not often enough.

The progression of events in Gravity are surprisingly cogent given the style of narrative and often sparse lack of exposition which is a refreshing change.

All that said however it has to be stressed that anyone thinking this film is very realistic would be wrong. Gravity is stylised structural hyper reality. It’s almost too well choreographed in its chaos.

Almost too pretty and too neat to really root the viewer in a sickening kind of gut wrenching sense of cinema verite that would be evident in say Paul Greengrass’ United 93. Still it is one that has to be viewed in digital 3D to get the most out of its sumptuous visual design and presentation.

But that isn’t its crowning glory in the least. Gravity owes much of its suspenseful appeal to the work here of sometimes justifiably vilified Sandra Bullock. Though it shouldn’t be in the context of her work here.

While Clooney is known for great work, his acting muscle is hardly stretched in this film, it is Bullock who shines. Her character in Ryan Stone is intriguing because she hasn’t been written to be a character that’s fully endearing to the viewer.

Her character is bitter, pessimistic and sometimes a touch whiny. But it is a testament to her performance here that even through all that one finds themselves slowly but surely rooting especially for Ryan to pull through her trials and adversity.

It’s pretty evident why James Cameron loves this film. There is a very thin evolutionary line of character in Ryan Stone that runs through in James’ own famous female protagonists like Ellen Ripley and Sarah Connor. Almost like primal ancestor, not the fully realised female avatars of Cameron’s films, but certainly on the path to getting there.

In geek terms, I could see Ryan Stone being a natural precursor to Mass Effect’s female Commander Shepard. They certainly seem to be cut from the same cloth.

Bullock brings an intoxicating mix of choreography, physicality, vulnerability and fierce sexuality to her feminine role in this, while also handling the emotional heights and dips that her character experiences in this narrative that runs at a surprising clip.

By the third act, a soaring score and an uplifting, empowering close brings Gravity in for a fulfilling touchdown and all in all, is a very welcome, much needed breath of fresh air after a long struggling gasp of this cinematic year so far.

By the time of this review, Gravity has become the sleeper hit of the year, winning the approval of both audiences and critics alike. It also helps when you get a sterling endorsement by none other than king of the world James Cameron himself.