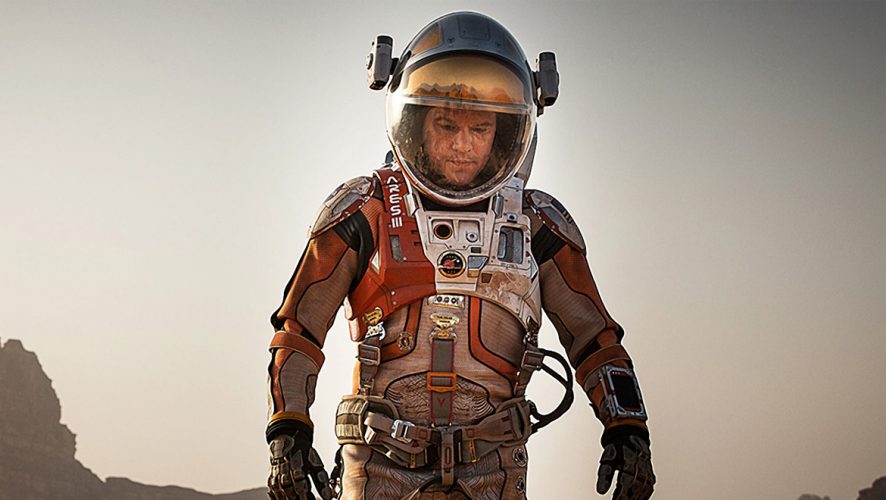 ”I’m gonna have to science the shit out of this.”

The output of Ridley Scott over the past few years has been shoddy at best. Exodus, The Counselor, Robin Hood, Body of Lies and A Good Year to name a few that have failed to live up to his usual standards. Prometheus, his long awaited return to the Alien universe was beautiful to look at but was bogged down by a woeful script but it was a step in the right direction for the director. The Martian sees him returning to outer space yet again to deliver what basically is Cast Away on Mars.

The film opens with several beautiful barren shots of the Martian landscape. It immediately brings to mind the wonderful opening of Prometheus right down to the cold, lonely feeling the images provoke. This short introduction to Mars sets the stage for what is to come and to be honest is the only part of the film that ‘feels’ like a Ridley Scott film.

The film quickly introduces us to the team of astronauts who have been given the task of visiting Mars to study it. Things seem to be going well when a storm hits and they are forced to abandon the planet. During the rush to evacuate the planet, Mark Watney (Matt Damon), is struck by debris as he makes his way back to the lander. Believing Watney dead, team leader Melissa Lewis (Jessica Chastain), makes the hard decision to take off without him.

Watney survives the injury and the storm and awakes to find himself abandoned. His situation is what could be described as ‘dire’ as the astronauts habitat on Mars was never meant to sustain life for extended periods. It will take NASA years to get another ship to him. With nothing left but the materials the crew abandoned and his own skills, Watney must figure out how to survive. The Martian is all about Matt Damon and his performance which is a difficult one due to fact that he spends the majority of the film on his own. Watney spends much of his time trying to figure out how he’s going to grow food, make water, travel long distances and of course communicate with NASA on Earth. During this time he makes video log entries where he basically talking to you, the viewer. It’s a great way to step into what Watney is feeling and the struggles that he is enduring. Damon nails his performance and if he hadn’t the film would just not have worked.

As you watch The Martian it feels real because of the sole perspective of Watney. There is nothing overblown or anything that borders on science fiction here. However it stumbles when the viewer is pulled away from Watney and his battle for survival to the host of other characters back on Earth.

NASA and JPL (Jet Propulsion Laboratory) characters are introduced quickly and they all have various skills needed to plan the rescue mission. The cast is likeable, featuring the likes of Kata Mara, Kristen Wiig, Jeff Daniels, Chiwetel Ejiofor, and Sean Bean in a surprising non dying role. Introducing so many characters each with their own part to play in the mission slows things down considerably. There is nothing wrong with the characters or scenes, in fact there are many laugh out loud exchanges between the various parties. Its just that during these extended scenes we are left wondering what is happening with Watney.

Out of all these characters it’s Jeff Daniels and Sean Bean who shine. Daniels plays Teddy Sanders, the head of NASA while Bean plays Mitch Henderson, the flight director. Sanders is framed as something of a bad guy in the film, but every decision he makes is one he truly believes is best for the agency as a whole.

Daniels is wonderful turning this character who could otherwise just have been your usual Hollywood corporate suit into something more. Mitch Henderson is the flip side of Sanders. He is there for the crew and the crew only. He doesn’t really care what happens to the agency or if their image is tarnished. Bean is down to earth (pardon the pun) and portrays Henderson in a quiet and understanding way. 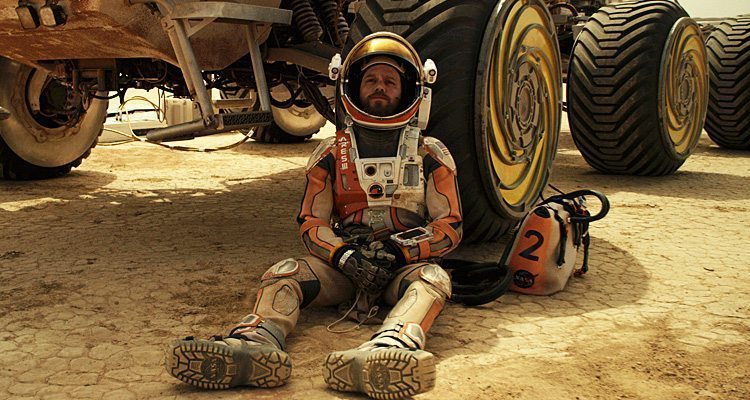 The Martian isn’t a perfect film due to the pacing issues and aside from the usual amazing sound design and gorgeous visuals we come to expect from Ridley Scott, it never truly feels like a Ridley Scott film. It feels more like a Ron Howard or Robert Zemeckis film than anything else. The best parts are definitely watching the problem-solving unfold and Matt Damon’s central performance. There may be similar films out there, but The Martian is still one of the better films of 2015 but it still is not a return to greatness for Ridley Scott.