Both games’ stories have real-world players donning their versions of futuristic VR headsets and diving into Virtual-Reality Massively Multiplayer Online (VR-MMO) games (Like Game-ception), albeit in different parts of Kawahara’s overall universal timeline. But never mind the over twenty years of in-world time differences, we’ve now got a crossover where both worlds collide.

AvS is, at its heart, a thinly-veiled excuse to get fans of both series excited at having the characters from both series interact. The plot has the characters of Accel World traversing a time-portal and landing in Sword Art Online’s Alfheim Online world, only to discover that both their in-game systems are combining in a horrible end-of-ages style “Age of Twilight”. To help solve this, both teams have to combine forces to rescue Sword Art Online’s resident AI-daughter (really!) Yui, who’s been locked away by the evil bad guys. And now you know 90% of the plot. 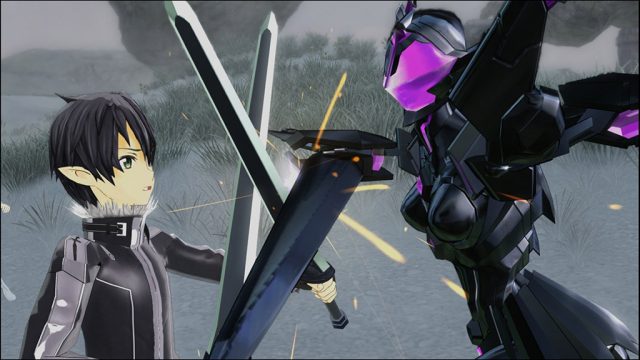 For those who haven’t caught either of these games, here’s a quick primer: Sword Art Online (the “earlier” game in Reki’s timeline) is one of the first VR-MMOs, and one where things went horribly wrong for its players. Players were trapped inside a “die in-game and die in real-life” world, with main hero Kirito and his allies featured in a series of stories. Accel World is set about a generation into this alternate future, with far more advanced VR headsets called “Neuro linkers” that bring VR into the real world through augmented reality. “In-game” fights with Accel World’s Duel Avatars by then are so advanced that players can turn in points for real-world rewards.

Fly around and watch the sunsets

While AvS ostensibly urges you to act quickly to save Yui, as with all such titles, there’s really no sense of urgency. Right from the start of the game, once tutorials are out of the way, you’re free to explore the first map and fly around, swatting enemies and exploring. And that’s the real hidden meat of the game – exploration.

AvS has a strong emphasis on letting players wander about and do their own thing. Maps are huge and draw distances long. Besides running, players can fly around (or jump stupidly high if you’re an Accel World character, all but one of whom can’t fly), similar to previous Sword Art Online titles such as Sword Art Online: Lost Song. Flying, at first, can be disorienting and confusing, but quickly adds some interesting strategic depth when you engage or disengage from foes in combat. More on that later. 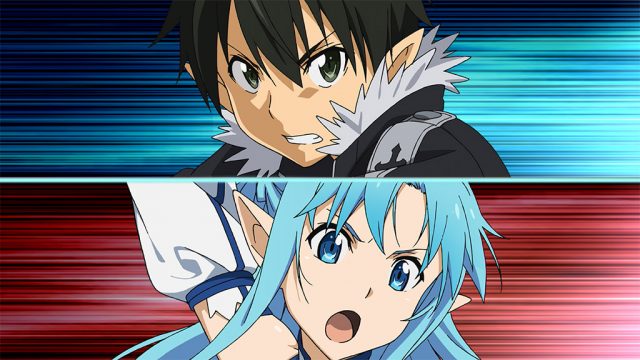 From a distance, the maps are lovingly rendered, beautifully drawn worlds with a rich ecosystem of creatures. You can fly almost anywhere in the map, swooping down to explore crevices and enter hidden dungeons. If you’re serious about upgrading weapons and finding the best gear, you’ll have to do this eventually anyway, but it was a real treat.

Unfortunately, the game probably expects you to be flying around most of the time, as besides standout landmarks, grounds are often just undulating plains of insert zone-type here chock-full of creatures to kill. This featureless problem expands once you drill down to areas such as dungeons. Dungeons are simplistic affairs and enemy models are just a couple grades above basic. Big boss battles fair better, as they should, but even then these are few and far between. It’s a shame that AvS hasn’t learned anything from previous titles using this engine by now.

Overworld and dungeon aside, the in-game map itself is also a finicky beast. Yes, it does track things such as objectives, teleport gates and the like, but it often inexplicably refuses to list them even if you’ve discovered the location.

Graphically, the characters themselves are also a little on the awkward side. You’ll notice this the most when it comes time for in-game cutscenes showing character faces. They look… off. As if the designers thought they had it almost there, and that’s good enough. This is confusing as other Sword Art Online titles such as Lost Song, and even Hollow Realization don’t seem to reach the level of uncanny valley that AvS does.

Where things fair better, then, is if you’re a fan of Japanese-style art and their preferred means of plot exposition. Cutscenes of characters talking to each other are drawn well in 2D-style, and most are voice-acted out in Japanese with English subtitles. While there are some minor translation issues, the game gets most of it right. This is key, because for folks who have zero idea about one (or even both) of the series, AvS spends almost no time in scene-setting. Who’s Lizbeth? Who’s Agil? Who’s Silver Crow? A dizzying array of characters get quickly introduced (with more being recruitable through side-missions) and if you’ve come into the game cold, you’ll quickly get lost in the long namelist. 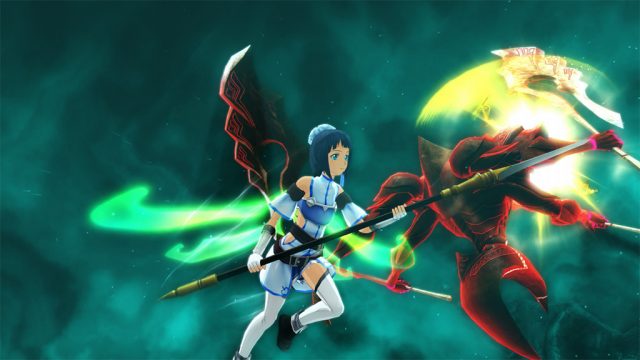 Unfortunately though, I hope you’re able to multi-task. There are times during combat where allies and enemies will be shouting things out in Japanese, with the English subs appearing in smallish letters in the bottom half of the screen. For the most part, not a major problem, but there are a few fights where it’ll be key to pay attention to these, made difficult by having an enemy in your face.

Still, the story itself is a breath of fresh air, if only because you’re seeing two entirely different series coming together and acting in the way they usually do… except to someone else entirely. There are lots of sidequests, including character-specific ones to entice you to play with every character, and the quests – while basic – get the job done in pushing players along.

Do you prefer to punch, kick, or slash?

One good thing I did enjoy was combat. Where Accel World characters tend to punch and kick their way to victory, Sword Art Online’s list of characters get a long list of weapon types to choose and equip. You can bring two more characters with you on your travels, and hot-swap between them anytime during fights.

Combat skills are relatively lean, which is actually a massive boon. Having come from the last Sword Art Online game Hollow Realization, the conscious choice to keep the total number of skills available and mappable to various button combinations is a good one. 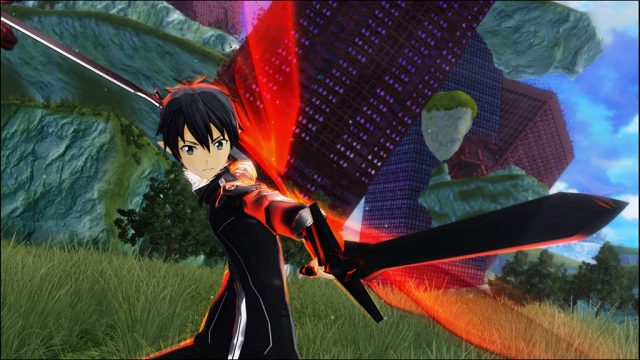 Every character has access to several sets of skills such as one-handed swords, maces, rapiers, magic and more, depending on their class (Accel World folks get their… fists, mostly) but within each set are maybe a dozen special skills at most. This means actual consideration on what you want to have bound to quick actions and at least some forethought when it comes to moving into zones. What’s also nice is that the game keeps action moving by keeping skill cooldowns fast. Rather than ending up just mashing light and heavy attacks, you’ll learn to quickly combo them together during fights.

And special skill use you must, because similar to previous Sword Art Online titles, skills (such as “Starburst Stream”) get better with repeated use. This gives players some sense of continuity as little pop-up’s come up saying a skill has been improved, and means the game isn’t tied to its level-up system. This also is tied to how passive skills, such as Dark Resistance, work.

A minor nitpick is the problem that both skills and commands are tied to the same small set of options. Want to ensure your party scatters against a boss attack? You’ll have to give up a skill slot in order to yell that. Fortunately the AI is generally quite adept at deciding when to gun for the same enemy or choose their own, making it necessary in my playthrough to only bind one button for boss fights – “Get Out Of The Damn Big Attack!”

The focussing of combat skills is also good due to the steep learning curve. If this is your first Sword Art Online-style game, there are quite a few multi-button presses you’ll need to remember to get maximum use out of each character. For example, during fights, attacks on enemies build up the “Switch” gauge, activated by then hitting the triangle and circle keys. You can hit square and the X buttons for another combination, and these are all still while you’re fighting on the ground. There’s a whole different set of button-combinations during aerial combat as well. It took a good while for me to even begin to grasp these, and the game barely gives you time to be eased into it. I’ve kind of mastered them, and when you do there’s some real joy to be had combining Switch, multiple special attacks that refill meters, and then Switch-ing to your third party member for even more damage. Getting there, though, is an honest struggle. 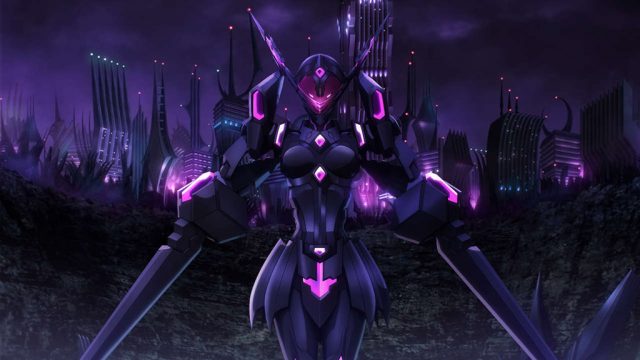 The other problem with combat is how easy it is to lose your lock-on. With multiple enemies both on the ground and in the air, locking on to foes and keeping yourself locked on seems like a simple-enough job for the designers to have done. Not so. AvS has a very twitchy system, and I found myself frequently dashing suddenly towards another enemy after my lock-on swapped itself away despite not having touched it. This is exacerbated in dungeons, where multiple enemies clog rooms and you often want to try to just finish the one dude in front of you.

Somewhere in here is also an online multiplayer option. Players can come together to fight special bosses (although it’s worth noting you can also do these solo) or fight each other in duels. I didn’t get a chance to try this feature out, but it seems like a nice, if unnecessary, feature compared to, say, Sword Art Online: Hollow Realization’s focus on raid boss battles.

Accel World VS. Sword Art Online: Twilight Millennium, is very obviously aimed at fans who enjoy either or both of the Japanese series they come from. That’s not necessarily a problem, and fans who have invested into the world do have at least an interesting side-story to talk about.

What’s problematic is how hit-and-miss the rest of the game is. AvS could have been better. I really enjoyed flying around, exploring as in-game creatures respawn back in for more hunting. I enjoyed the boss fights with interesting mechanics. I enjoyed the streamlined combat skills. I enjoyed the witty banter and how the designers somehow managed to make both worlds combined work out. I don’t think people will enjoy, however, the flaws which combined add up to aggravate such as incomplete maps, featureless dungeons and character models that weren’t quite finished.

If you’re a fan, sure this is an easy sell and probably worth it. If you’re not, expect some heavy reading of the glossary alongside the slog of overcoming the game’s initial learning curve.