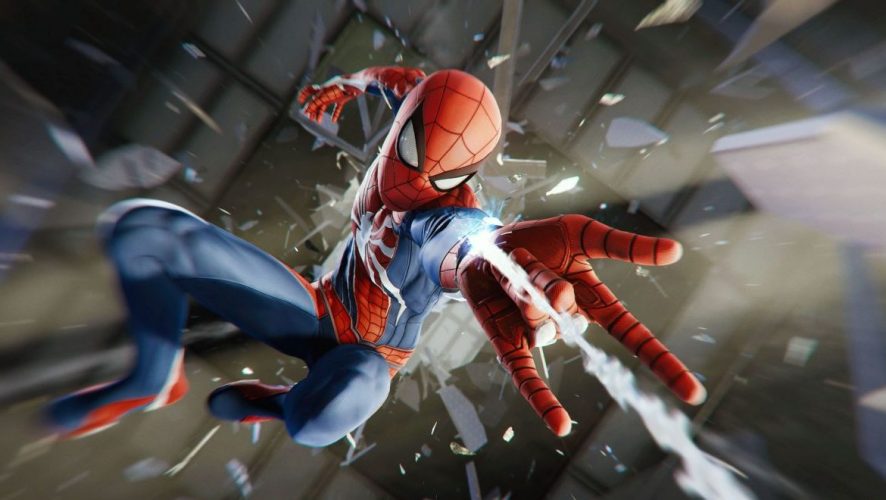 First Impressions: Marvel’s Spider-Man Is A Marvel To Behold

If you’re interested in what James Stevenson, Insomniac Games’ Communications Manager, has to say about the game, do head over to our interview piece!

The Marvel Comic Universe is huge, and we’re not talking Earth-616 here. It is so huge to the point where it’s easy to lose track of canonical material across all the comics, much less factor in the other properties, from films, TV, cartoon and other titles. Take, for instance, the Spider-Man movies, of which there are currently three – Maguire, Garfield and Holland – each with their own version of lore and narrative alterations.

It’s certainly a good decision on developer Insomniac Games’ part, then, to take the best bits that make up the vast world of Spider-Man, and cleverly inject them into their highly-anticipated title Marvel’s Spider-Man. Adopting a brand-new story that bears no ties to any existing book or film, it follows the crime-fighting journey of 23-year-old Peter Parker, as he strives to fight against villains threatening the safety of New York City, while carrying out his daily adult responsibilities. 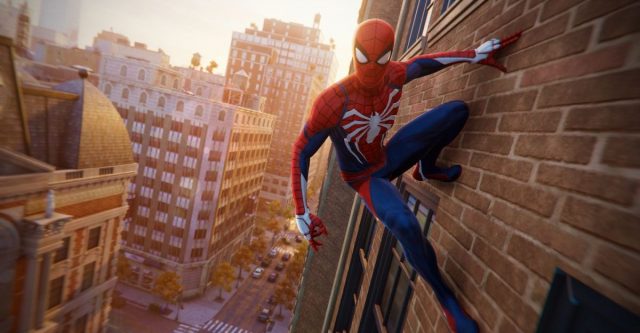 Oh, Spidey is still amazing, Uncle Ben is still dead, there was a radioactive spider, and with great power comes you know, but everything else is up for intepretation.

It’s more of a coming-to-age story than one which touches upon the webslinger’s origins, and it’s clearly an exceptionally impressive effort from the minds that brought Spyro, Ratchet and Clank, and Sunset Overdrive to the gaming community. That much is obvious, as despite a meagre gameplay time of two hours – our E3 first impressions piece had nothing but praise for it, and the sentiment is further cemented after playing through a newer build of the game. 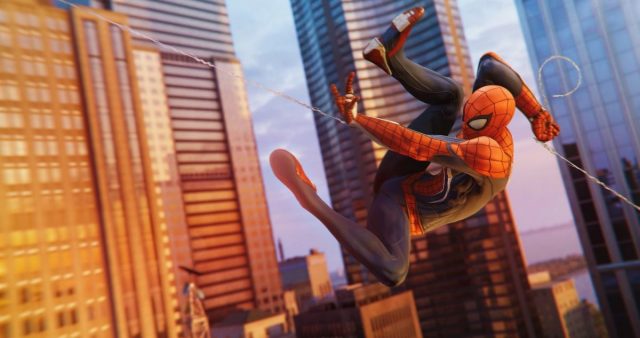 For a start, everything in Marvel’s Spider-Man is wonderfully portrayed. From the architectural landscape and mundane details of New York City’s streets, to Spidey’s suit inventory and acrobatic antics, the team has got impeccable visuals pegged down. Oh, there’s a reason for the new, Superior costume as well. The vibrant colours are more than representative of the lively buzz present in the Big Apple, and the gorgeous skyline makes for a breathtaking sight as players swing about in town. Keep an eye out, and iconic landmarks can be spotted as well.

The PS4-exclusive game may be deeply entrenched in a compelling narrative, but that doesn’t mean there’s no room for other activities. In fact, the huge expanse of space encourages exploration, which serves as enjoyable downtime from mainlining. Apart from fixing tower signals and tracking down crimes-in-progress, other side activities include retrieving backpacks and tinkering with scientific research, all of which come with upgrade tokens as the reward. 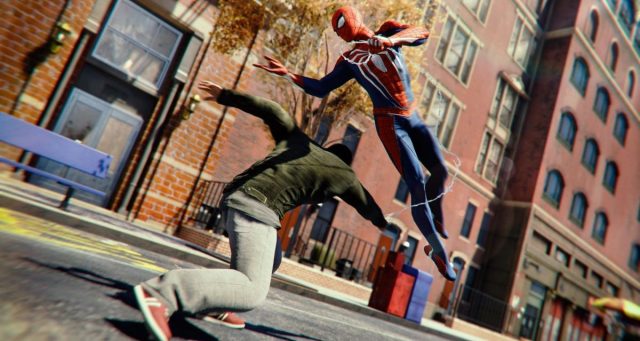 Having said that, it’s not quite an open-world map. Yes, there’s the welcome element of freedom, but also a fine balance between exploring and powering through the main story, making it suitable for gamers belonging to both categories. During the two-hour hands-on session, the alternative to go for smaller tasks was much welcomed, but it could potentially become a little monotonous given a longer gameplay length, more so if the story hits a lull period.

A superhero game cannot do without some action, however. In Marvel’s Spider-Man, combat and maneuvering is a surprisingly slick affair, with effortless, fluid motions abound. There’s the mandatory navigation mode of web-slinging from one place to another, the switch to freerunning on surfaces, or the four-legged steady climb to greater heights. The second, in particular, is exceedingly exhilarating, especially when Spidey dips down and swings back up with increased speed. Expect lots of fun mid-air backflips and somersaults, too. 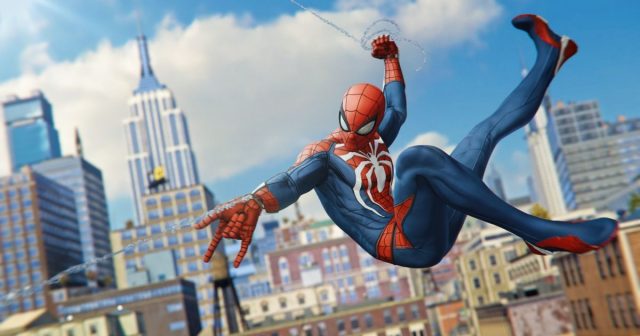 One small gripe regarding the navigation is not in the jerky movements – which, by the way, doesn’t at all happen in-game – but more ironically, in its overly-smooth motions. There are times where players will find themselves sailing past their designated locations due to what seems to be an auto-move mechanic, or something similar thereof. These instances are few and beyond, however, and do next to nothing in pushing gamers away from the amazing world that is Marvel’s Spider-Man.

A glimpse at the combat will inevitably yield comparisons to Rocksteady Games’ Arkham series, yet the playthrough proved it to be in a unique class of its own. While the feel is undoubtedly similar, being built on a combo-chain system and all, Insomniac’s title capitalises more on environmental advantages than its caped vigilante counterpart. The difference in tone and style sets them apart as well: where the Arkham franchise had darker, more sinister undertones, this one exudes bright, considerably more joyful vibes, with Spider-Man’s graceful and sleek movesets countering Batman’s straight, brute strength-heavy approach. 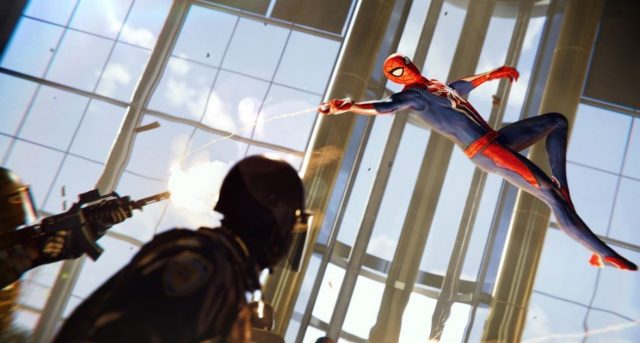 Filled with different attack combinations and counter-moves, the combat mechanics are easy to pick up, but hard to master. Running the gamut from launching enemies into the air to luring them into a well-designed trap, timing and creativity are rewarded. In the initial stages, Web Blossom, which lets Spidery fire off a flurry of webs, is the only finishing move available, and more awaits as more suits get unlocked. This combination of evasive and aggressive maneuvers can be further upgraded or learned by means of skills points over time, which should give rise to more room for tinkering with combo setups.

Additionally, the introduction of quick time events – or QTE for short – to major cutscenes also makes for a surprising but not unwelcome entry.

Skirmishes in Marvel’s Spider-Man are an undeniably enjoyable affair, but things only get better with stealth. In a way that’s similar to Eagle Vision of the Assassin’s Creed franchise, the resident webslinger’s ‘spidey sense’ lends players the ability to scan the environment and come up with the sneakiest way to subdue enemies. A colour indicator highlights the risk level of attacking a target, and it’s especially handy when there are pairs or groups of adversaries to rain hell on.

READ ALSO:  The Falcon and the Winter Soldier To Bring Back And 'Reinvent' Some Of MCU's Earliest Characters

Make no mistake, however – taking the sneaky approach is by no means a breeze, though it certainly gives an immense sense of satisfaction, a great deal of exhilarating fun, and the chance to think creatively and outside of the box. 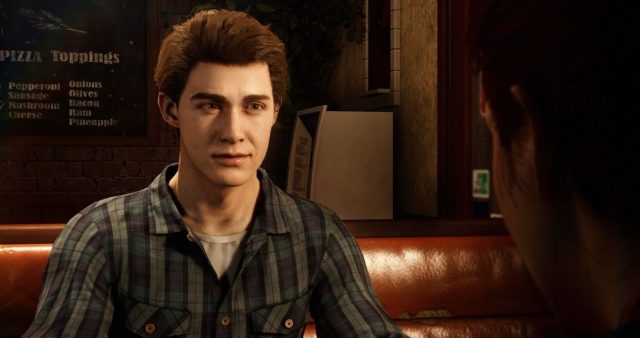 Outside of fighting evil, because superheroes need their downtime as well, players get to step in the shoes of Peter Parker, who’s currently transitioning to adult life after graduation. The double life role serves as a perfect fit to the overarching premise – with his job as a scientist, Peter is able to supplement his superhero needs by creating and fixing his suits in the lab. An interesting part of this would be the carrying out of menial tasks and the solving of tech puzzles, which brings a different kind of variety into gameplay. The difficulty level is well-balanced too, so the process is far more rewarding and fun than it’s frustrating, and hopefully this carries on for the rest of the game. 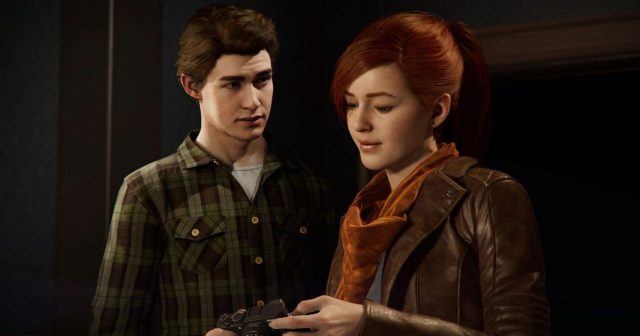 Taking a break from superhero antics, we see familiar face Mary Jane (MJ) joining in the fray as well. As revealed in the story trailer during San Diego Comic-Con (SDCC) 2018, she, together with Miles Morales, are Spidey’s out-of-costume sidekicks, but only the former is playable. In the brief session of the two-hour playthrough, players follow in MJ’s pursuit of the truth as a journalist at the Daily Bugle, and while it’s definitely not as action- or stealth-packed as Spidey’s part, the experience was rather enjoyable.

The slower pace may come across as rather abrupt at first, but these lull moments are certainly appreciated amidst a hectic city and allow for a good break from the intense action. It remains to be seen if this would be a hit-or-miss mechanic or a truly well-executed one, though there’s no denying there’s a refreshing element to this. 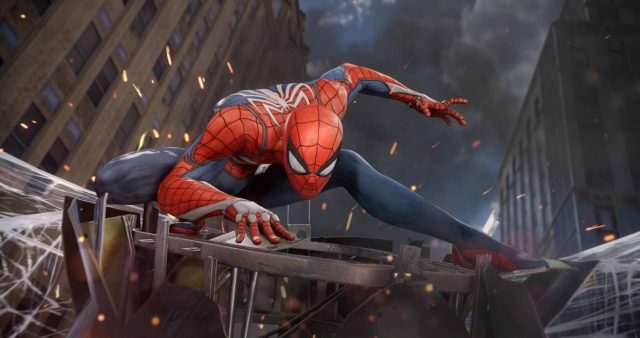 Marvel’s Spider-Man, in short, is a marvel to behold in every aspect. Armed with breathtaking visuals, smooth gameplay, a seemingly rich narrative, and thrilling action sequences, there’s plenty of content in store for players. The first two hours have been a blast, and the promise of further satisfaction is most certainly tantalising. Expect more web-slinging fun, narrative mastery, nefarious villany, and character development all while experiencing the power of a superhero come September 7, 2018.

If you’re interested in what James Stevenson, Insomniac Games’ Communications Manager, has to say about the game, do head over to our interview piece! 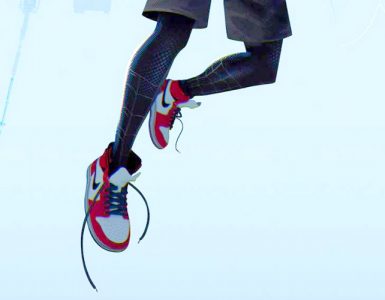 Well, at least now Miles is a bona-fide Superstar. 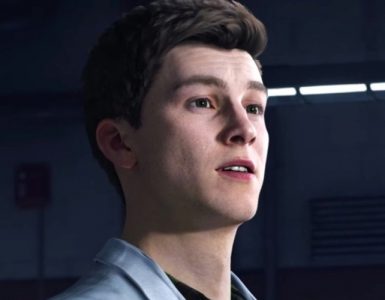 Marvel’s Spider-Man: Remastered Gives Peter Parker A Literal Facelift (Not That Anyone Asked)