Over the course of the past month, the Impossible Foods-infused burger — dubbed the Impossible Whopper — underwent a trial run in 59 restaurants in the St. Louis area.

The reception over the Impossible Whopper was so good that Burger King is now planning to make it available across the US’ 7,200 branches by the end of the year.

Of course, this hasn’t been the first time Impossible Foods is working with fast food restaurants, having incorporated its meatless patties in the menus of White Castle back in 2016, and those have gotten quite the lavish praise since then.

But White Castle is only US-based, and the partnership with an MNC like Burger King is a definite step up in terms of making the Impossible Burger more accessible to the widespread consumer base.

For the uninitiated, the Impossible Whopper patties are 100 per cent meatless, as they are primarily based on heme (short for soy leghemoglobin), a protein extracted from the roots of soy plants. This, mixed with genetically-engineered yeast, allows it to mimic the taste and texture of regular beef.

Sounds disgusting? Actually, the science behind it works. Having tried some variants of the Impossible Burger in Singapore, with the likes of Potato Head Singapore, Privé, and Omakase Burger, we can confirm with you that this is the real deal.

Unlike fast food beef patties, which are almost always dry up once they are put through the stoves and tasting extremely bland, the Impossible patties never seem to lose their juiciness and flavour, even after being cut out from their frozen blocks.

What Impossible Foods has been testing and trying out with their formula definitely works, so it will be interesting to see how it pans out when put through a fast food chain.

And the Impossible Whopper only costing a mere US$1 more than its regular beef counterpart doesn’t sound too bad of a markup, considering the stellar quality of the Impossible patties.

This is surely a turning point in the fast food industry, with more consumers clamouring for meatless alternatives to the usually unhealthy and environmentally-damaging production of its regular menu entries.

No news as to when Impossible Foods or Burger King plan to bring the Impossible Whopper over to Singapore and other countries outside the US, but we are sure to keep a look out for it when it actually does. 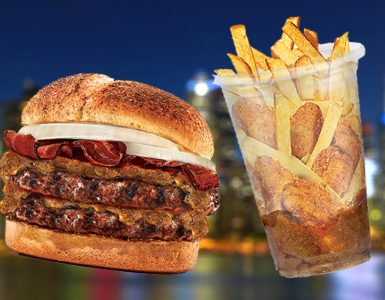 Filled with all the Rendang goodness, and Gula Melaka BBT desserts!