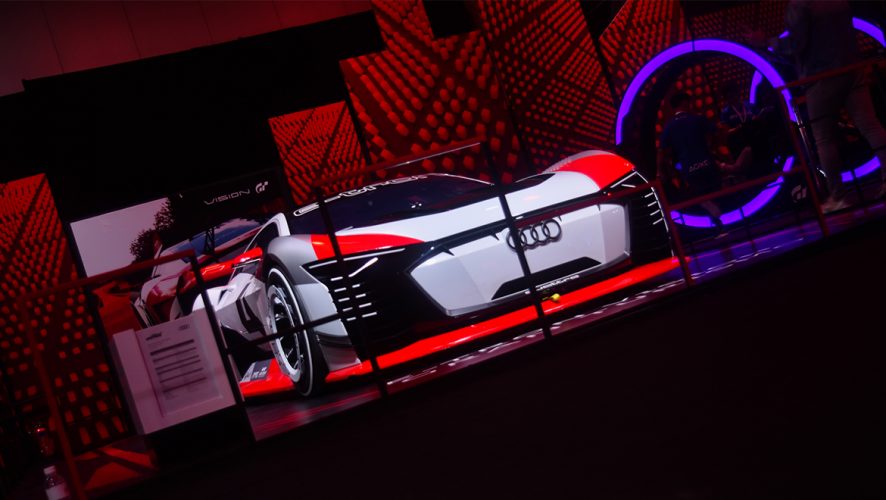 If you’re into cars, then you would’ve been pretty psyched to hear that Audi Brand Experience is making its way to Singapore. Covering over 8000 square metres of space in Marina Bay Sands Expo and Convention Centre, Audi Brand Experience Singapore 2018 will be boasting a number of their latest, shiniest, most teched-out line-up.

While you stroll around the vast halls, just soaking in all that automotive indulgence, be sure to check out the driving showcase, which features some pretty explosive effects across their LED flooring. Heart-stopping, jaw-dropping flashiness aside, the showcase also speaks a lot to the current dialogue surrounding the use of artificial intelligence (AI) technology on the road, and the idea of moving away from petroleum to environmentally friendlier options — which may interest those of you less awed by luxury vehicles we probably can’t afford on the average paycheck.

With the launch of Audi’s latest flagship model, the A8, we’re finally seeing Level 3 of autonomous driving capabilities on a commercially available car — although it’s yet to receive the all-clear from certain legislative bodies across the globe, so the current model on the market may have been de-automated depending on where you are.

If you’re unfamiliar with the lingo, Level 3 means the A8 won’t require driver supervision under specific conditions. With the Traffic Jam Pilot, you’ll be able to go hands-free and just let the car do its thing. Although for models without, you’ll still be getting a host of pretty cool features, like the A8’s active suspension, which makes bumps in the road virtually disappear for a comfortably smooth ride.

In terms of autonomous driving, the Audi Elaine is a step up from the A8, featuring Level 4 of autonomous driving, and like the A8, it’ll be taken for a spin during the showcase so feast your eyes for the few short minutes it takes centre stage. The Level 5 Audi Aicon — the pinnacle of autonomous driving, featuring complete automation — will also be making an appearance out in the exhibition area. It’s glossy white exterior, plush beige leather upholstery and noticeably sparse dashboard (no steering wheel) makes it a real impressive sight to behold. This is a car that definitely looks like the future — assuming our future’s not beset by any sort of pollution-instigated apocalyptic doom.

For the environmentally conscious (alright, there’s been some discourse about the carbon footprint electric cars entail, but we’re not going into that) you may find your interest peaked by Audi’s foray into electrification.

You’ll be amongst the first in the world to catch a glimpse of Audi’s E-tron at the Audi Brand Experience Singapore. Audi claims that the E-tron will be able to run for roughly 160 miles on thirty minutes of high-speed charging, outstripping its competitors, the Tesla Model X and Jaguar I-Pace. And while it’ll be the first electric Audi you see, it certainly won’t be the last. “The car you see today is the first of many,” Manning announces during the showcase, “By 2025, one in three Audis will be electric.” 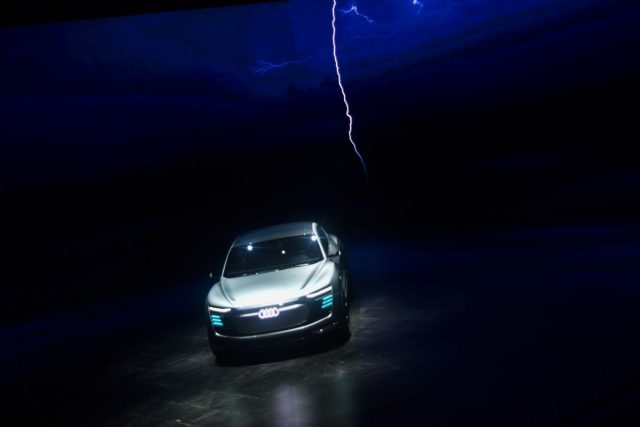 Even if you’re not an Audi fan, the Audi Brand Experience Singapore is a pretty interesting way to spend your weekend, if just to take a gander at how far automobile technology has come, and how much further it’s going to go.

The Audi Brand Experience is happening right now at till 14 October 2018. Be sure to grab your tickets before heading down to Marina Bay Sands.