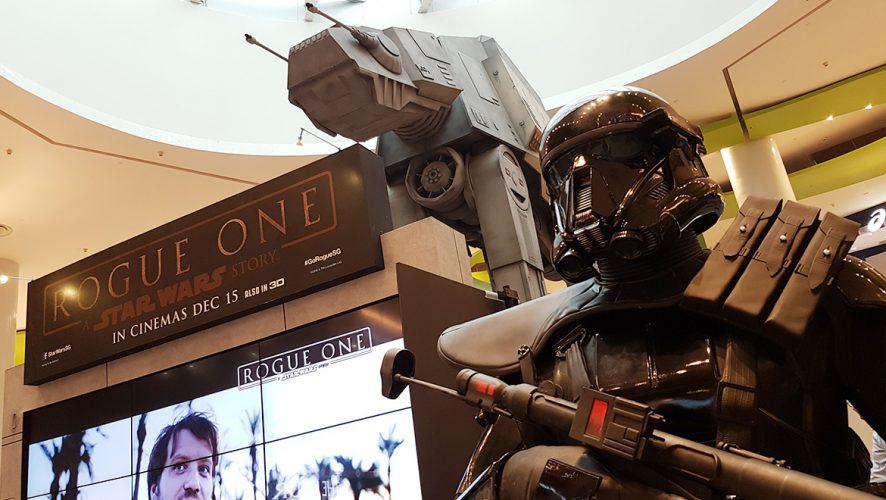 Take a selfie with an 8-metre tall AT-ACT Walker, Only at VivoCity

In about two weeks, we will be visiting the Star Wars universe once more in Rogue One: A Star Wars Story.  Remember the X-Wing and TIE Fighter at Changi last year? This event promises to be more accessible. Just like for The Force Awakens, VivoCity has joined the intergalactic conflict once more with a stunning display in its main atrium.

From now till December 18, feast your eyes on the 8.1m tall AT-ACT (All Terrain-Armored Cargo Transport) Walker dominating the mall. You can hardly miss it, and it is simply amazing to stand next to a giant mechanical beast that can easily squish you.

It is definitely a photo-op not to be missed for any Star Wars fan.

Here’s the lowdown on the 1:4 scale AT-ACT Walker:

How long did it take to build the AT-ACT Walker?
1 month

What is it made of?
Concrete, metal, wood, foam

It would not be a Star Wars event without the ubiquitous Stormtroopers, especially the new Imperial Deathtroopers decked out in their cool black armour. Thanks to the Rebel Legion, we even got some Jedis and colourful lightsabers!

There are even awesome premiums to collect if you are looking to purchase any of the merchandise available there. Speaking of merchandise, expect toys, figurines, and larger-than-life props for you to live out your space fantasy like many of our favourite heroes/villains!

Fans can also interact with STAR WARS Commander or STAR WARS: Galaxy of Heroes, two interactive games available at the event. Another not-to-be-missed aspect of the event has to be Rogue One: Recon Mission, a virtual reality experience that propels you into space in an X-Wing. The promise of space and Imperial fighters, not to mention the Death Star, never looked so real and intimidating before!

Christmas is also around the corner and VivoCity has got you covered as well. From the 107ft musical Christmas tree, giveaways, live carolers, and shopping deals everywhere, it’s the perfect place to be this Christmas season if you are a Star Wars fan.

With just two weeks to go, build up your excitement and try to hold it in by coming down and enjoying the festivities with fellow fans and shoppers.

The Rogue One: A Star Wars Story atrium event at VivoCity is on daily until December 18.