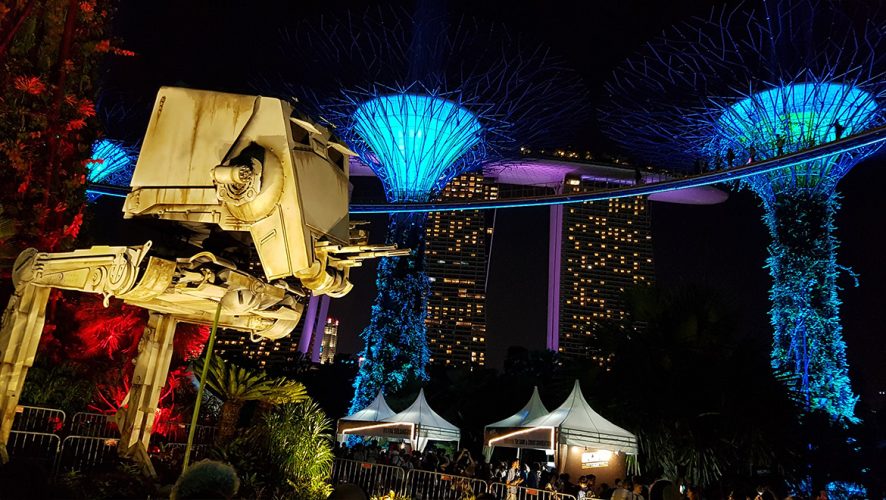 It’s May 4th! That’s right, it is Star Wars Day! May The Force…. Get it? Apart from the usual brands trying their luck at cross-marketing with the iconic movie franchise, there are actual celebrations happening for fans. It’s all ongoing, from May 4th to 6th, at Gardens by the Bay!

If you have not already seen the skies lighted up by the gorgeous SaberTrees at the Gardens, it is all part of this 3-day festival. Regarded as the largest lightsaber light-up in Southeast Asia, the already prominent Supertrees are now glowing like the weapons of the Jedi and Sith Lords. Adding to the excitement is a 15 minutes music and light composition, titled Garden Rhapsody: Star Wars Edition. With the memorable Star Wars soundtrack playing, you are sure to have a great time. 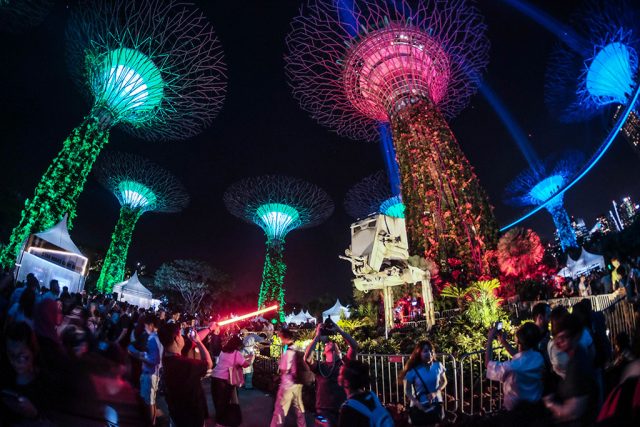 Here is a glimpse at the finale:

If you are looking to dance the night away, there is also the Star Wars themed Silent Disco happening on May 5th and 6th.

Such weapons are dear treasures, and they deserve a worthy guardian in the form of an All-Terrain Scout Transport (AT-ST)! The gigantic fixture stands tall among the SaberTrees, and is best viewed from the OCBC Skyway, perfect for your panoramic shots with the Marina Bay Skyline. If the lightsabers are making an appearance, you can certainly expect characters from the movies gracing us with their presence. The Rebellion is represented by everyone’s favourite grizzled warrior, Chewbacca, whereas the First Order sends the indomitable Kylo Ren. They will be backed up by the ever-awesome 501st Legion, Rebel Legion, and FightSaber. Be prepared to take many photos with your favourite characters brought to life!

There will be plenty of community booths as well so bring along some credits and do your part for charity!

The festival will culminate in the inaugural Star Wars Run on May 6th, with both competitive and fun runs for everyone to join in the festivities. Before the run starts, there will be pyrotechnics to send our runners on their way, with Kylo Ren and Chewbacca on standby to cheer them on. Featuring differing themes of Light and Dark sides, runners have chosen to pledge their allegiance to either in a 4.5km non-competitive run.

Competitive runners will experience part of the Dark side during their 10km route. The race village will also be home to plenty of Star Wars themed activities, food, and beverages, even an outdoor screening of Star Wars: The Force Awakens!

Will you be joining us at the festival? With 3 days of exciting activities to be experienced, be sure to come on down and celebrate STAR WARS with fellow fans!

may the 4th Singapore Star Wars