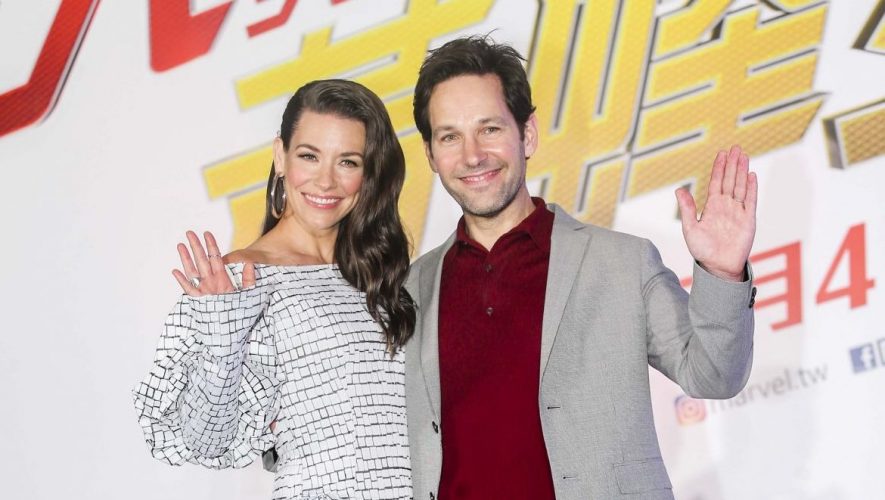 Three years after Marvel’s tiniest super hero hit the big screen, Ant-Man is finally back, this time with a little help in the form of the Wasp. While it may be a popular tourist destination, this was the first time that heroes from the Marvel Cinematic Universe have set foot in Taiwan.

So as Paul Rudd (Ant-Man) and Evangeline Lilly (The Wasp) stepped onto stage at the Mandarin Oriental Hotel in Taipei, they were met with a blizzard of camera flashes and raucous cheers from the packed room filled with press members and lucky Marvel fans. A warm and eager welcome indeed.

And sure, these characters may be small, but they’re still important, so naturally their presence was sorely missed in Avengers: Infinity War. Perhaps they were there fighting there all along, just invisible to the camera? That’s exactly what Lilly thought, as she joked, “For the record, I was there, I was just tiny!” Unable to top that, Rudd followed with, “Well maybe I was too small you couldn’t see me. Now I feel like I just piggybacked on your joke.” 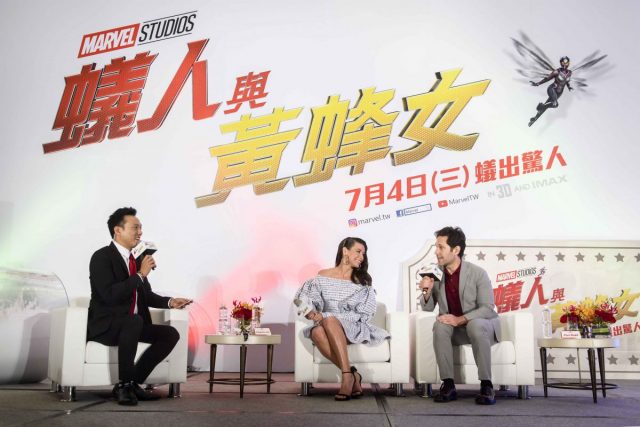 In fact, Rudd himself was unaware of how they would handle Ant-Man’s absence in the film. “I remember going to see Infinity War and they do mention that I was under house arrest and I was not able to leave. Hawkeye and I were busy being parents and we couldn’t escape to go save the world. It was interesting when I saw the film and I thought “Huh, well there we go”, I didn’t know that was coming.”

In any case, Ant-Man and the Wasp sees plenty of changes and new challenges over the first movie. Following the events of Captain America: Civil War, Scott Lang is put under house arrest, Hope steps into her new role as the Wasp, and they are faced with a new mission from Hank Pym.

“We pick up the story 2 years after the first Ant-Man movie ended and so there’s been a lot of healing and a lot of growth that’s gone on. We’re on much better terms and Hope is in a much better place personally. Not just because she’s in a better place with her father, but also because her lifelong dream of taking up the mantle her parent’s carried of being a superhero has also come true,” reflects Lilly thoughtfully. 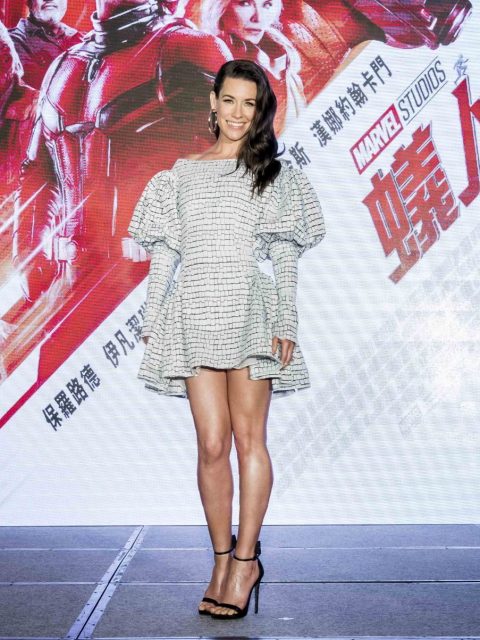 Meanwhile, Scott Lang has done his own fair share of character development as well, from being thrown into the world of superhero duties somewhat unwittingly and reluctantly at first, to owning his new role and abilities with gusto. As we see Scott and Hope’s new dynamic as Ant-Man and the Wasp unfold in the film, there’s another important relationship at stake.

A key element to be explored in the film, that’s for sure – how Ant-Man will balance being a good dad, while also being a superhero that his daughter would be proud of. Which of the two is harder? Being a father himself, Rudd leans to the former, “Some people would say that they’re not mutually exclusive. I would say being a parent can be very tricky sometimes.” 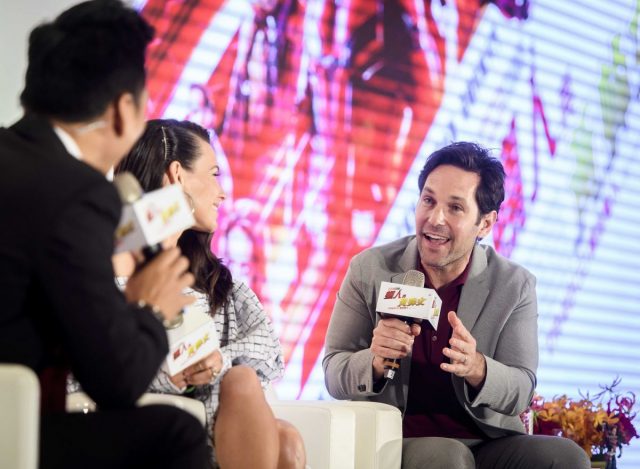 Hank Pym gifting Hope with the Wasp suit at the end of Ant-Man was an exciting moment, and naturally we’d think becoming the Wasp means a much more gruelling time for Lilly this time around, but that wasn’t the case according to her. Since multiple units would be filming at the same time, numerous stunt women and body doubles helped Lilly with her scenes as well.

“I actually got to share the load with an incredible stunt team, with an incredible special effects team that were helping with creating the tiny Hope when she shrinks and flies. It was a real collaboration and I didn’t have to carry the whole load, so it wasn’t more demanding,“ mentioned Lilly

Rudd thought otherwise, and added “I worked a lot with Evangeline, I think she’s being modest, I know that she did quite a bit. But we’re both very aware and want to acknowledge the stunt women that played a part in the film who did a lot of the really heavy lifting – certain things they wouldn’t let us do.”

As is the case with Marvel films, things are generally kept hush-hush under wraps. We don’t get to see it till it’s out in theatres, but sometimes even the actors themselves are kept in the dark! Rudd shared that they are just as excited to see the film, having only seen early rough versions, and explained that often actors first get to see snippets only during ADR (Automated Dialog Replacement) sessions to re-record sections of audio. “We’re only imagining what it’s going to look like, I don’t know when we’ll see the finished product.” 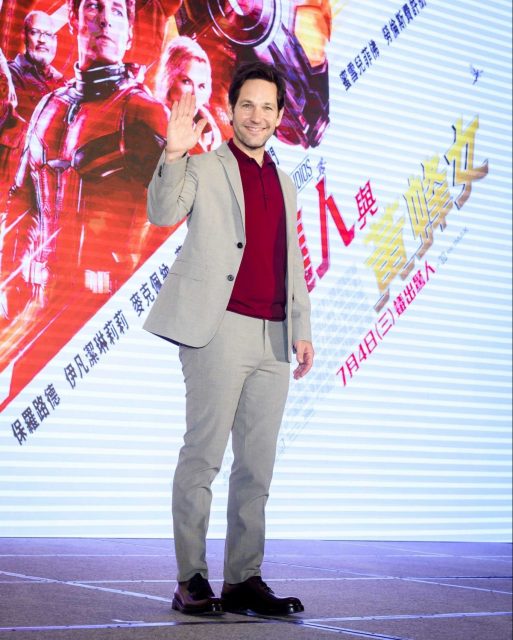 Ant-Man has been well-loved for its humorous, light-hearted approach to superhero genre. It’s always fun seeing the items that get shrunk down or expanded to massive proportions, a memorable one being the giant Thomas the Tank Engine. In the trailer for Ant-Man and the Wasp, we see the huge Hello Kitty PEZ dispenser, which actually caused some internal dispute.

“Deciding what that PEZ would be took several different versions. There was one where we thought “What if we threw a Captain America PEZ?” but that seems a little too self-congratulatory,” elaborated Rudd, who was involved in the writing process.

Narrowing down the list of items to grow or shrink is a challenge, and Lilly was uncertain at first when given the choice, appealing to the audience for any good ideas. “A diamond!” shouted the money-minded, “A donut!” goes another audience member. Lilly finally thought of one, “Ooo I know, what about if you’re stuck in traffic, you can shrink all the other cars and blow right by them all.”

Oof, pretty destructive there, Lilly. “Or you could only shrink yours and then you just roll under them,” goes Rudd, perhaps a better solution. 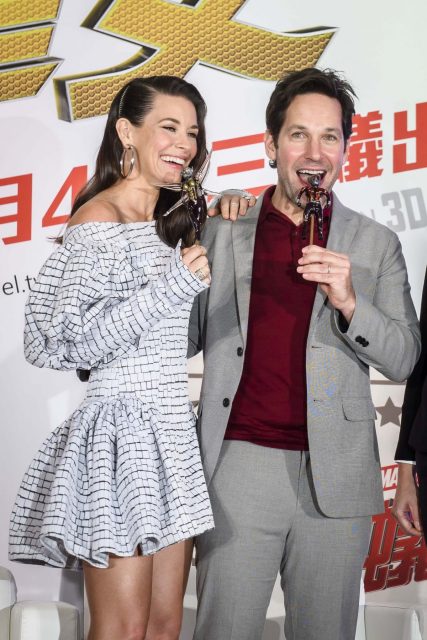 The Taiwanese in the audience were excited to hear what Mandarin words they had picked up, and Lilly had learned quite an array. “Nihao was the easiest one to remember because that is an island in Hawaii, Niihau. I’ve got a few more! Do sia! Umm, xiexie! What else, what else. Oh oh I know! Paiseh. That one’s important ‘cause I’m Canadian, so we say “Sorry sorry sorry” a lot.”

Wow, top marks to Lilly for knowing “paiseh”, we’re impressed! A little translation for those terms – you might already know “nihao” and “xiexie” for hello and thank you, but “do sia” is dialect for “thank you”, and “paiseh” is also a popular Chinese dialect (Hokkien) slang for when you feel shy or embarrassed.

Being in Taiwan, it’s all about the food, and Lilly’s eyes lit up as she got the chance to share about what she ate, which included a whopping 13 flavours of Taiwanese ice cream ranging from pork floss to wasabi. “Guys, I barely fit into my dress this morning, it was insane,” she laughed.

“I didn’t have one flavour of ice cream!” cried Rudd incredulously. 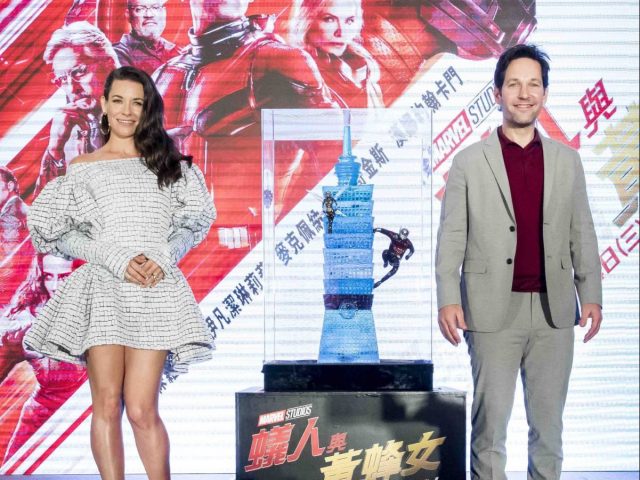 With all that ice cream, it’s amazing how Lilly maintains her slim figure needed to fit into her skin-tight Wasp suit, which by the way, she absolutely loves. “I don’t know if this is true, but I believe my suit is the most comfortable in the MCU. I don’t know if that’s just because I liked it so much and I felt so cool in it, I really wanted to wear it. I slept in it, I ate in it, I bathed in it, I never took it off. Ever! I’m very method… no, of course I took it off.”

“The only thing that was a bit of a bummer wearing the suit was I like to eat, and I like to eat in large quantities. And I’m in a very tight suit where I can barely breathe, let alone eat. So I had to eat in tiny quantities all day instead of one big meal, that was irritating,” complained Lilly.

As for the Ant-Man suit, its design seems to have been maintained from the first movie, which according to Rudd, was pretty comfortable. “It wasn’t too bad, but you don’t want to hang out in it all day. I remember once being asked about this by Dave Batista who plays Drax in Guardians of the Galaxy. I just met him and he asked me, “How’s your suit, is it uncomfortable?” And I thought there’s no way I’m going to complain about the suit I have to wear to Drax, who has to sit in a makeup chair for like all day, and then again all night just to take the makeup off so I think he has it the worst of anybody.” The Q&A wrapped up with a special gift for the two of them – traditional Taiwanese pulled sugar treats, expertly handcrafted to look just like Ant-Man and the Wasp. Lilly and Rudd were ecstatic to receive these, and upon confirming that they were edible, straight up chomped on the arms and wings of their sugary doubles with no mercy. Ouch.

But that wasn’t all. A mysterious box covered in a black sheet had been sitting on stage the whole time, and it was finally unveiled to be a pulled candy sculpture of the iconic Taiwan 101 building, adorned with Ant-Man and the Wasp. Cameras clicked as everyone was in awe, with Lilly and Rudd filled with nothing but praise and admiration for the artist/chef. 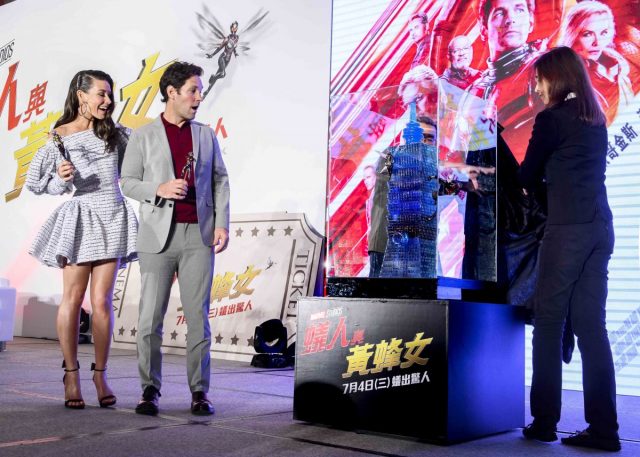 The press conference ended with cheerful “Wo ai ni!” (I love you) and “Wo ai Taiwan!” (I love Taiwan) from both, and Rudd added a heartfelt message of thanks to the audience, finishing with a “Xiexie” (thank you).

Fans in Taiwan will get the chance to catch Paul Rudd and Evangeline Lilly in person at the red carpet event National Theater and Concert Hall Plaza in Taipei on 13 June, 2018, and Ant-Man and the Wasp is buzzing into theatres in Singapore on 4 July, 2018.