The film that humbled Black Panther: Wakanda Forever at the Japanese box office during opening week has received dates for its release outside of Asia. Suzume no Tojimari will hit theatres in the U.S. and 14 other countries starting April 2023, with France and Malta getting first dibs on 12 April.

Australia, Brazil, Germany, Mexico, and New Zealand are set for 13 April, while Austria, Belgium, Canada, Gibraltar, Ireland, Luxembourg, United Kingdom and the U.S will welcome the movie on 14 April. The screening dates for additional Latin America, Europe, Middle East, and Africa territories will soon be announced, but there’s no word from Crunchyroll so far on distribution within Asia, including Singapore.

Suzume no Tojimari is the latest venture from Makoto Shinkai, best known for his craft on the acclaimedYour Name and Weathering With You animated features. It opened in Japan on 11 November and earned US$13 million in its first three days, marking the strongest opening weekend performance by the Japanese director.

The project is helmed and written by Shinkai, who’s also credited with the original story. Masayoshi Tanaka (Your Name, Weathering With You) designed the characters, with Kenichi Tsuchiya (Your Name, Garden of Words) serving as animation director. RADWIMPS scored the movie alongside Seattle-based Hollywood film composer, Kazuma Jinnouchi (Ghost in the Shell: SAC_2045, RWBY: Ice Queendom).

A synopsis of Suzume no Tojimari reads, “Seventeen-year-old Suzume discovers a mysterious door in the mountains, and soon other doors begin appearing across Japan. As the doors open, they release disasters and destruction, and it’s up to Suzume to close them again.”

makoto shinkai suzume no tojimari weathering with you your name 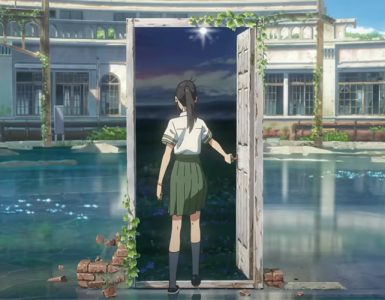