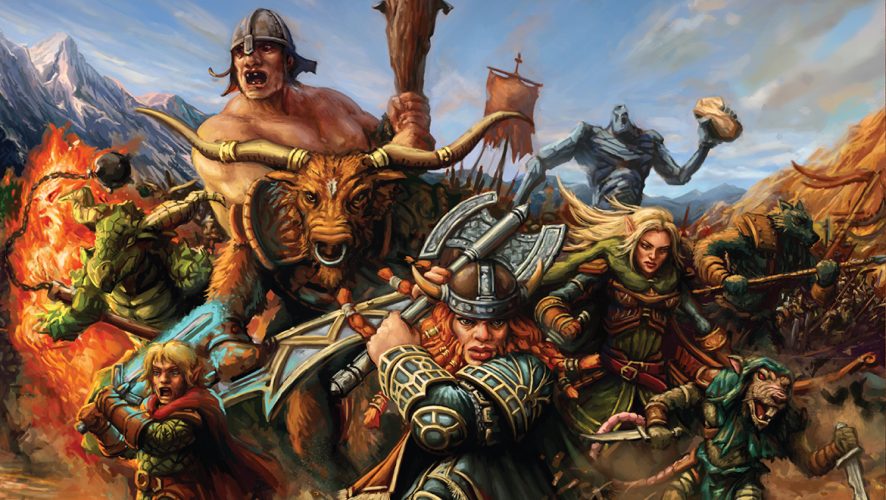 Geek Review: Warband Against the Darkness

War… war never changes, and equally so the politics in an army. That is what Warband: Against the Darkness is all about. Warband is a Eurogame (A game that favours less luck and more strategy) about manipulating the end of a war and the structure of an army in your favour that leads to your race amassing the most prestige to become the winner.

That being said, even though the mechanics of the game are strong, the thing that caught me about the game was the theme. In Warband, you are the commander of your chosen race in a fantasy world in which a great foe, ‘The Darkness’ has invaded and thus old hatreds were put aside for the common good and together your people and the other races have united to beat the enemy back from whence they came.

This overwhelming force has all but won the war and all that is left is to mop up the enemy. This is where you begin the game and with a beaten enemy, old allies now become present rivals. Thus it is not beyond you to further your  prestige while also sabotaging your fellow commander’s efforts in the army.

Usually Eurogames have a reputation of sacrificing theme for mechanics but Warband finds a happy balance. This is all helped by the excellent presentation of the game by Jeff Mackintosh and illustrations by Joseph Shawcross. 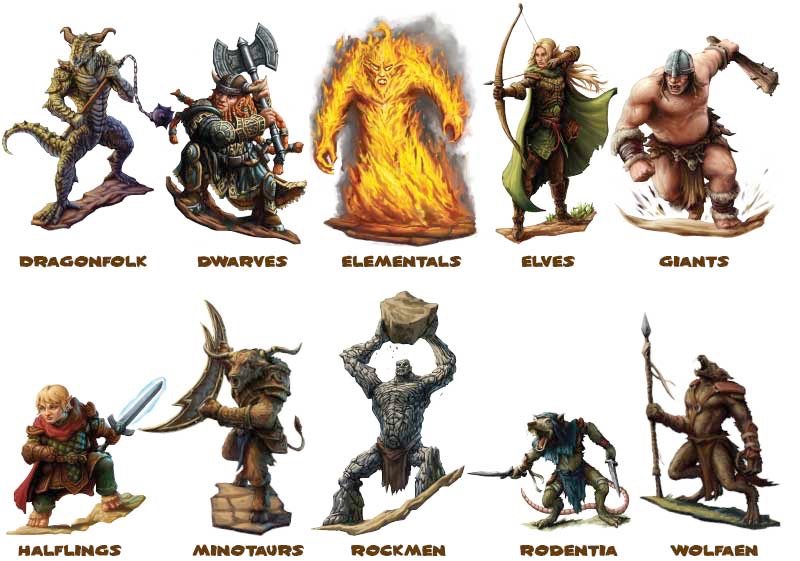 Gameplay starts with each player choosing a colour and a race. Each race comes with a board that lists the race’s unique ability. This slots into a player board and at the start of each turn, a player will choose one upgrade to improve for their race and the more one focuses on one row, the better the reward at the cost of the other row’s benefits for the rest of the game. Then each player will take three actions of their choice as stated on their player board. 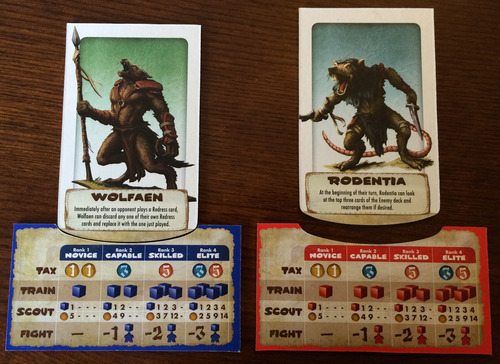 Now most of the actions will take place on the beautiful shared game board. The left side shows the five realms where you will fight the remnants of The Darkness. This is where you will send your scouts too to give bonuses to your troops when they fight in and adjacent to the area of conflict.

Also throughout the game, a player can collect intel cards by fighting and the sum of one realm’s cards are multiplied by the number of scouts in the realm for points too. Thus there is always an element of surprise in the game that keeps it from just being a numbers game. 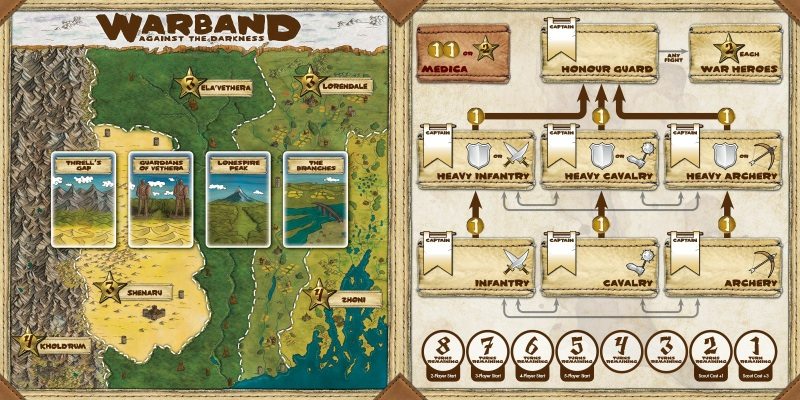 The right side of the board is what military buffs like me would really drool over and that is the warband roster. It is here that one can train your limited troops to become infantry, cavalry or archers. The majority race in each unit is captained by that race. Captains are important as when a player goes to fight, they have to pay each captain not of his race one gold but that race is also the one to suffer casualties first.

All the actions in the game usually leads to the most interactive action, which is the fight action. When a player fights,  they have to fight all three enemy cards on the left of the board and must take to battle the whole army roster.

So that means that during each player’s turn, if one can’t fight, the last thing they should do is setup the next player to do so as on top of scoring one of the three enemy cards, the chosen card also states what unit will suffer casualties. Thus, that player can also affect the other players via affecting the roster greatly.

Warband is a game that I adore. That being said, it is not without it’s faults. Firstly, it works best at two to three players and at max four for me personally. This is because each player’s turn has consequences that can be exploited by others for large point scores and thus each additional player can mean longer downtime in between turns.

It is also not possible to really pre-plan your turn as usually by the time your turn comes around the whole state of the board has changed. I would also suggest allowing new players to pick their races as some race’s powers seem better than others for beginners. Such as the halfling’s passive ability to collect more money each time they take the tax action compared to some which are circumstantial.

The last thing is the game affords plenty of interaction and the things you can do to each other are usually not positive. Thus a group playing Warband has to go into it knowing that it is nothing personal. Now, the things I do adore though way outstrip the things I feel are problems. The game length is reasonable at  1 to 2 hours depending on player count, gameplay is solid, the game has a level of interaction not common among Eurogames and the theme comes out in spades. Each action one does make sense in real life, such as purposefully holding back the training of troops so another player can’t fight or using a card to remove someone’s scout so they have to take casualties, so on. I felt the theme so much that I did a video on how Warband parallels real army politics with the focus example of the Alliance of the 18 Lords against Dong Zhuo from the Chinese classic, Romance of the Three Kingdoms and the designer Micah Fuller and publisher Dyskami replied to my video on the website Boardgame Geek to my honour.

In conclusion, Warband: Against the Darkness is a game I highly recommend that serves both a Euro and Thematic crowd. Try it and find out why war… war never changes.

board game Review Warband Against the Darkness 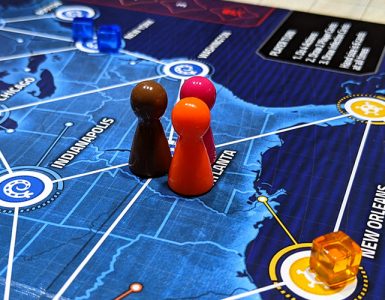 The best of Pandemic in a travel-worthy box.

A solid entry to any board game collection.