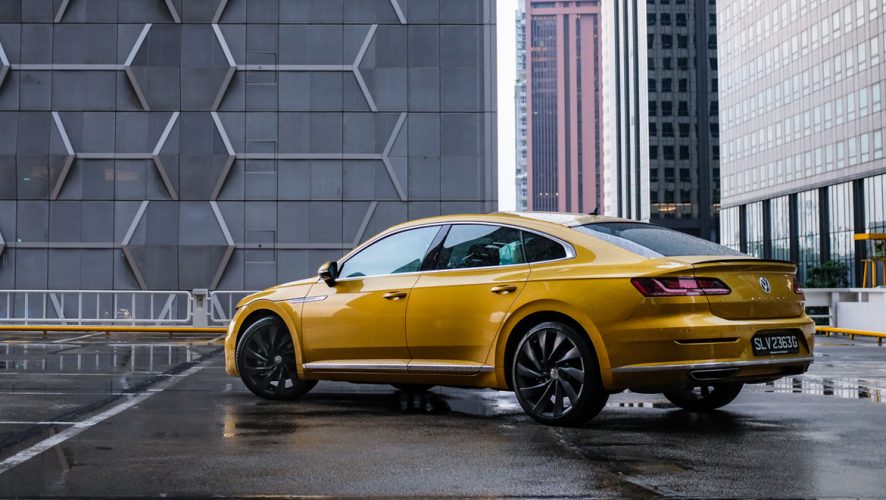 When I was eight, my parents made the decision to change the school session I would attend for the following year. Instead of being in the afternoon class, I would be joining the one in the morning. I struggled slightly with leaving behind friendships built over two years of recess breaks and school-bus conversations. Having to make new friends with an entirely different group of students from the other session was also a challenge initially. It’s never easy being the new face in a crowded room.

That’s what the first-ever Volkswagen Arteon is up against.

As the new kid on the block, the Volkswagen Arteon’s appearance is a departure from the car maker’s relatively conservative designs. Clad in what Volkswagen calls Kurkuma Yellow Metallic, the avant-garde styling on this gran turismo makes a bold statement. The Arteon sports the widest and deepest radiator grille in the entire Volkswagen range and is marked as the face of a new Volkswagen generation. It also has a bonnet with a clamshell design, with creases running from the windshield to the grille like those on the current Audi A5.

As you size up this newcomer, your eye naturally follows its character line which starts from the radiator grille through the side profile and ends in the tail lights. The sharp undercut on the boot lid and low-slung roof suggest sporty ambitions. Where the Arteon is concerned, however, form and function actually go hand in hand – the sharply contoured trailing edge above the tail lights is part of the overall package of aerodynamic design features, supposedly allowing the car to generate enough downforce at the rear axle to not require a rear spoiler at high speeds.

There is no escaping the fact that this car is a massive unit. The Arteon’s large rear hatch makes dumping items in the 563-litre boot a breeze for those long road trips north of Singapore. The Arteon would excel at transporting people in comfort over long distances; its 2,837 mm wheelbase is nearly 50 mm longer than the Passat’s, offering so much legroom you actually wonder if it’s necessary.

Where the Arteon’s outward appearance is bright and flamboyant, the interior bears an understated air of simplicity. It’s clean and efficient instead of handsome and charismatic. The monochrome interior looks ordinary, although it still feels adequately premium. A friend asked if the analogue clock in the centre of the dashboard might hint of the demographic this car is targeted at, but the Active Info Display and 9.2-inch infotainment system ought to put that argument to bed.

The overall simplicity may be the result of seeking to balance sportiness and luxury but as a flagship, I think the Arteon deserves a bit more flair on the inside. Nonetheless, it’s a very comfortable cabin to spend hours in, with good cushioning and even massage functions for the driver’s seat.

Concealed under the Arteon’s clamshell bonnet is the running gear lifted off the Golf R, which churns out 286 bhp and a maximum torque of 350 Nm. Its 0-100 km/h claim of 5.6 seconds is entirely believable, delivered through the latest 7-speed DQ381 DSG gearbox and 4MOTION four-wheel drive system. Drop the clutch with Launch Control activated and the car snaps forward with a ferocity that briefly discards the Arteon’s aspirations to luxurious refinement.

And that’s where it gets a little confusing. When you start the engine, there’s no escaping the fact that this is a workhorse of a four-cylinder block – albeit one of the best turbocharged units out there today. The rortiness is on the money for a hot hatch like the Golf R, but the engine’s brutish character feels at odds with the expected sophistication inferred from the Arteon’s appearance. Does a flagship model deserve two more cylinders, at least?

After a weekend of driving the press car around Singapore in its different modes–the latest generation of Dynamic Chassis Control allows drivers to customise the car’s suspension on a sliding scale–I think I finally figured it out.

Instead of trying to regularly exploit the top end of the Arteon’s powertrain, driving it less hurriedly allows the car to really come into its own. The Arteon is a stylish sedan capable of comfortably taking you across a continent. It’s also able to excite you with an occasional glimpse of the aggressive but endearing character that is well-loved by Golf R enthusiasts.

In the company of more established peers like the Audi A5 Sportback and BMW 4 Series Gran Coupe, the Volkswagen Arteon R-Line manages to hold its own with an overall aesthetic that is boldly modern and artfully sculpted. While often more conservative, Volkswagen’s designs tend to age better than some of its rivals, although time will tell how the Arteon’s avant-garde styling will fare. At this price point, the Arteon also annihilates the two aforementioned peers with its power output, torque, acceleration and four-wheel-drive setup. It’s a lot of car for the money.

As far as self-introductions go, the latest member of the class of four-door coupes certainly makes a good first impression. Beyond that, all signs point to the likelihood of it getting along just fine. That’s one less thing to worry about in the report card.

As the new kid on the block, the Volkswagen Arteon is hailed as the start of a new design era at the company. It packs a punch too.