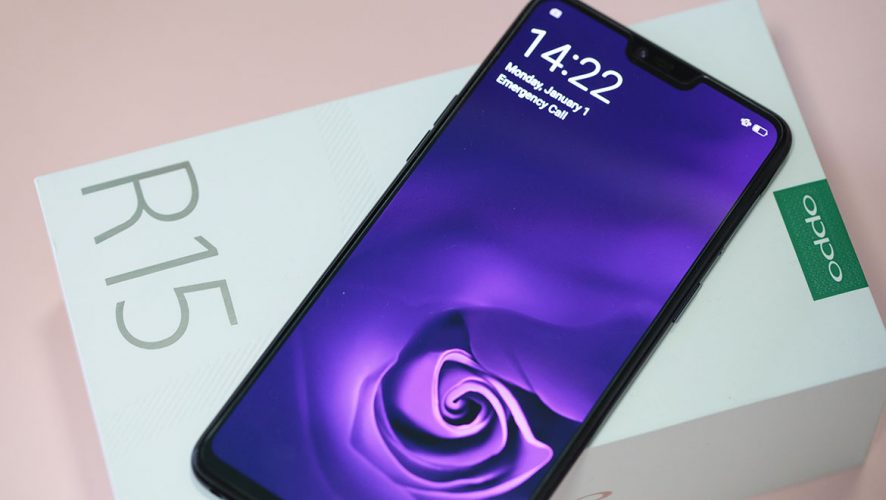 The mobile phone industry goes through trends with little mercy, and breaks free of them just as quickly. Where the dual-camera setup has always been the norm in mobile photography, the Huawei P20 Pro surpassed expectations by introducing a triple lens rear camera. On the iPhone side of things, the notch is the recent talk of town, with many Android phones adapting the same design for their flagship models. OPPO is one company that keeps up with the latest changes, and it shows. The R9 saw the addition of dual cameras to compete against the likes of Huawei and Honor, while the R11 welcomed narrower bezels when the bezel-less trend struck. It doesn’t come as a surprise, then, that the R15 has stuck to the same formula, entering the market with the iPhone X-inspired notch in tow – albeit smaller in size.

The debate over the notch has grown stale, and definitely boils down to a matter of personal preference. Here’s mine: I do find it an unnecessary feature, and its incompatibility with certain apps (Instagram, Snapchat, Facebook Messenger) can be frustrating at times. If anything, at least OPPO has done a decent job at refining the notch size, so there’s that. Perhaps an option to turn it off, seen on other models like the P20 Pro or LG ThinQ G7+, would be welcome. Design-wise, the R15 is the embodiment of the statement of “slim is in”. Sporting a lean, mean cut, it measures 7.44mm thick, and packs a 6.28-inch OLED display into a body that curves into a glass back. On one hand, that means fingerprints are easily captured on the surface. On another, it isn’t quite a bad choice – the phone fits nice and solid in the grip, and is more slip-free than expected. Users with smaller hands or a preference for smaller phones will probably need some time to adapt to its phablet size, however. The Nebula Purple variant was the set used for this review, and it adds a touch of pleasant aesthetic to the overall look. Its nifty-looking dark purple gradient changes between the default shade or a black one under select lighting angles, although the hue shift is barely evident from a distance. It’s a nice touch; without the gradient, the R15 would bear a heavy design resemblance to the iPhone X, as is the case with the single-tone Rouge Red and Frost White versions. 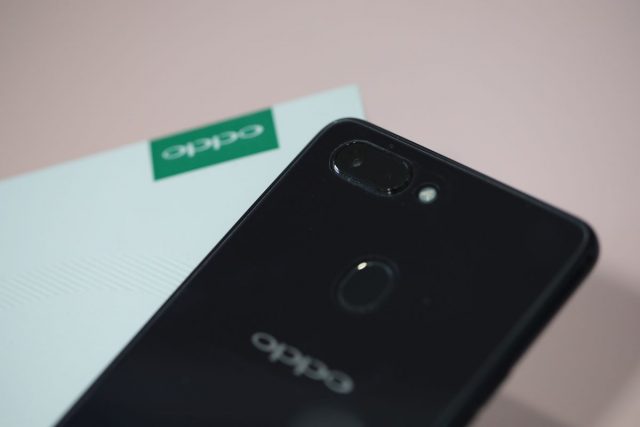 Flip to the rear, and a dual-camera setup and fingerprint scanner are settled snugly in their respective spots. The placement of the latter is a little higher than usual, which can make it difficult for users with shorter fingers to reach, depending on their gripping method. Luckily, its alternative comes in the form of very responsive face recognition technology, making it quite the handy unlock tool. In fact, under low-light conditions there was no noticeable lag time when unlocking the phone under this method. 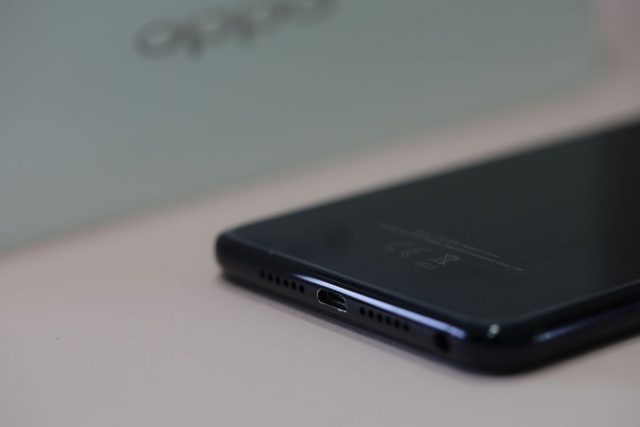 With the R15, OPPO is sticking to the traditional formula of a micro-USB port and a 3.5mm ear jack, which may seem a little backward considering the changeover to USB-C charging, but would be good news for fans who fear the day they have to migrate to a newer standard of USB cables. At the sides, the power button resides on the right, while the volume rockers left, with all of them having great tactile feedback.

There are, naturally, some advantages that come with a larger screen, such as a more immersive viewing experience, and the ease of reading fine print. But therein lies a common issue that big phones face: resolution.

At first glance, the R15’s display specs are fairly impressive. Armed with a 1,080 x 2,280 OLED screen at a 19:9 aspect ratio, it boasts great contrast and brightness, albeit with cooler colours, only to falter at sharpness, most evidently seen from the matte-looking app icons on the phone. 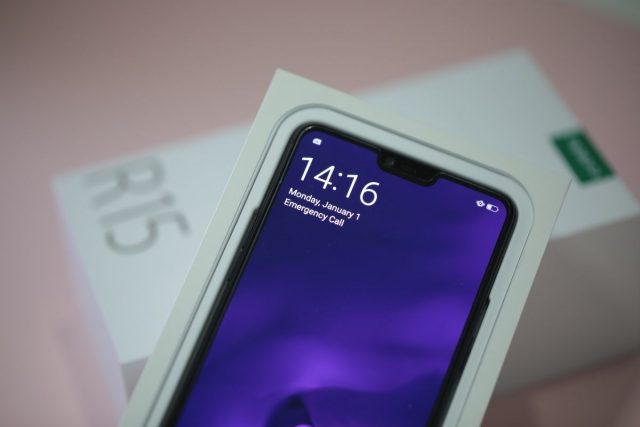 OPPO’s decision to use the Mediatek MT6771 Helio P60 chipset comes across as a bizzare one, especially in a market filled with mid-range Snapdragons for models belonging to the same calibre – in fact, the main difference between the R15 and R15 Pro is the use of Snapdragon 660 and the S$899 price tag for the latter. It’s not quite a good decision, either: the phone tends to lag when there are several apps opened simultaneously in the background, and select apps face a higher chance of crashing or freezing (Facebook and Instagram are the greatest culprits).

While closing and re-launching the apps often solves the issue, it happens fairly consistently, which can be frustrating at times. It was observed that reducing the number of background apps does cut down on the occurrence rate, and allowed for a more stable performance, although it’s evidently not the best fit for gaming.

A point of concern for the mobile phone community is the battery life, and fortunately the R15’s 3,450mAh pack is more than enough to last beyond the typical eight to ten-hour working day. In general, it lasts about a day and a half at medium usage, and its fast-charging technology is capable of juicing up by about 40% in slightly more than half an hour. Without the need to charge twice in a day, it’s certainly sufficient for your daily commute. 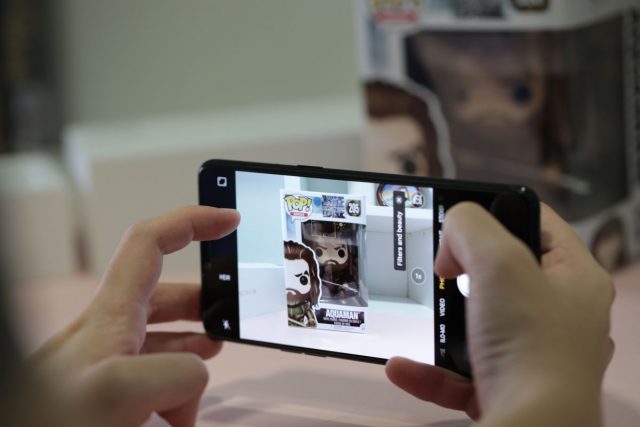 In the oversaturated market, mobile photography is one of the defining factors that determine the overall performance of a phone. The R15’s 20MP front and 21MP (16MP + 5MP) rear cameras put up an above-average showing, but are underwhelming as compared to other similar-tiered models, such as the Honor 10 and the LG 7+. In well-lit conditions, colour reproduction was fairly accurate, if a little washed out; the main problems lie with its sharpness and quality reduction – notice how the above pictures are lacking in the finer details. Shooting in the dark yields a noisy image, though it’s sharper and more usable than expected. The same cannot be said of photographs shot under vibrant, neon lighting – the phone fails to adjust to the tone accordingly, resulting in a coloured tint of sorts, or an oversaturated patch of colours. 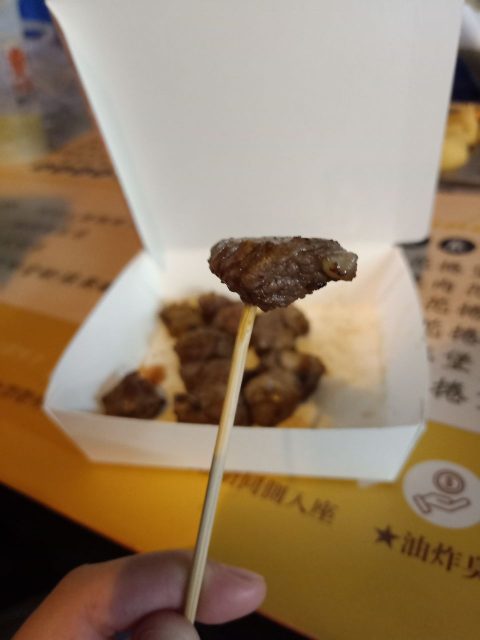 One gripe about the camera technology is the unnatural bokeh blur and the softening of a subject when zoomed in, giving off the vibe of an Instagram filter. Of course, the R15 continues to excel in the selfie department, though the artificial touch is still present. All in all, it doesn’t have the best cameras out there, but are more than well-equipped for the casual photographer. If you’d fancy some oomph, though, there’s always the R15 Pro alternative.

Standing in at S$749, the R15 is quite the tough sell, especially with many mid-range models selling for a lower price point and boasting better hardware and specs. It does enough to get the job done, but comes with a host of flaws – slight or otherwise – that may not appeal quite as much to users, unless you’re a loyal fan of the brand. Consider adding in a unique, outstanding feature, and perhaps OPPO will be able to gain new followers for the next round.

A solid entry from OPPO, the R15 is able to sufficiently equip users with all-around features. Unfortunately, its downfall comes in the form of a high price tag, and the lack of a signature element to distinguish itself from the many existing brands on the market.