As D.Va succinctly puts it, “Nerf this!”

And indeed, Nerf has done it. Back in Blizzcon 2018, Hasbro announced that they will be releasing a new line of Nerf Rival Overwatch blasters made to replicate the look and feel of some of Overwatch’s most popular heroes. Well, these blasters have finally been released and it is time to see how they stack up. While the other two Overwatch blasters Hasbro has released are white and rather plain looking, the same cannot be said for the weapon used by Overwatch’s very own gaming superstar, Hana Song aka D.Va’s Blaster.

Ignoring the bright orange tip on the nozzle, Nerf has done a great job bringing D.Va’s weapon to life. This Nerf replica stays true to the weapon D.Va uses, where the exterior is a vibrant pink colour, with the hero’s name printed on both sides of the gun in her signature design. There are even the little bunny ears by the top of the barrel. 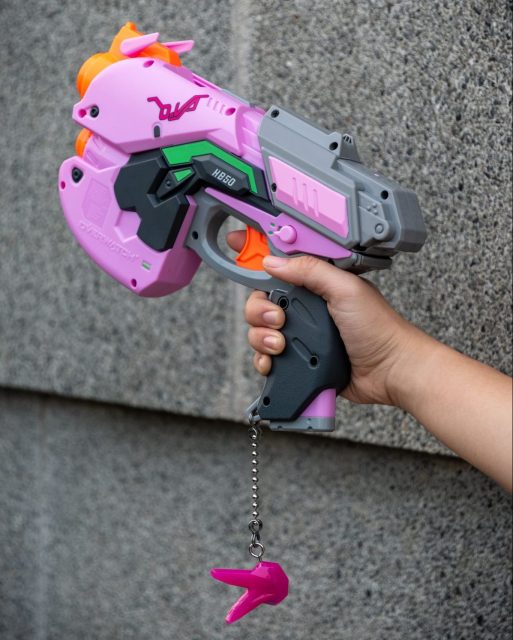 The blaster comes with soft foam balls, much like the ones seen with the Nerf Rival Apollo XV-700. However, unlike the Apollo XV-700, each D.Va Blaster only comes with three foam balls and the blaster itself can only hold three balls. It isn’t a lot but thanks to the type of rounds (har har) used, your shots will be much more accurate and rounds are capable of travelling much further.

However, whilst the gun might look great, cocking the gun is a different issue as some might find it difficult to pull the slider as far back as possible, just to load up the balls. The first few times might be simple, but the act of pulling the slider back and reloading takes a toll on the arm. That’s because you will need to cock the blaster by pulling the slider back, and pushing it back after every shot, even if you already have a ball placed inside. Make sure to push the slider all the way back, or else you will not be able to fire your rounds.

The blaster also comes with a nifty safety button by the side, so as to prevent misfiring, so feel free to pose with your finger on the trigger of the blaster, as long as the safety button is set to the right function.

Hasbro has done a stupendous job of bringing D.Va’s blaster to life, with its great attention to detail and futuristic design. While you won’t be able to use the blaster on Overwatch’s King’s Row or Lunar Colony, it is still a definite must-have for any D.Va mains out there. Just imagine the thrill of holding the blaster and shouting “I play to win!” at your opponents in a Nerf fight before shooting at them.

Despite being a little hard to load up, the D.Va HB50 Blaster is still an extremely good lookalike to D.Va’s actual blaster in the game and you can be sure that you will play to win with that around.